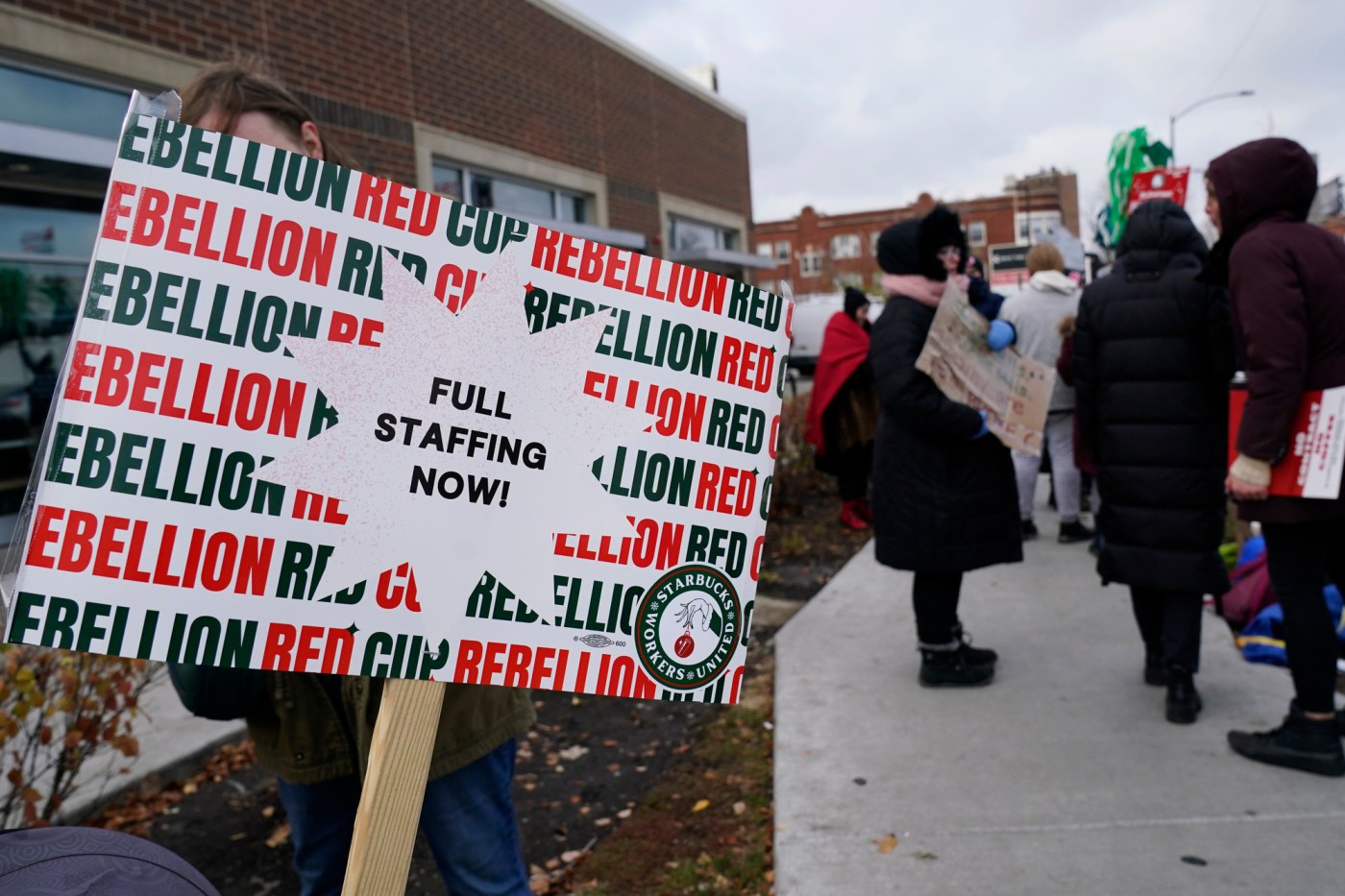 Starbucks workers at more than 100 US stores went on strike Thursday in the largest labor action since a campaign to unionize the company’s stores began late last year.

The strikes coincide with Starbucks’ annual Red Cup Day, when the company is giving free reusable cups to customers who order a holiday drink. Workers say it’s often one of the busiest days of the year. Starbucks declined to say how many red cups to give out.

Workers say they want better pay, more consistent schedules and more staffing at busy stores. According to Starbucks Workers United, the organizing group, stores in 25 states plan to get involved in the labor action. Strikers hand out their own red trophies with union logos.

Starbucks, which opposes the union effort, said it is aware of the strikes and respects its employees’ right to lawfully protest. The Seattle-based company noted that the protests are taking place at a small number of its 9,000 company-owned US locations.

“We remain committed to all partners and will continue to work side-by-side to make Starbucks a company that works for everyone,” the company said in a statement Thursday.

Some workers planned to picket all day while others would hold shorter strikes. The union said the goal is to close stores during the strikes, noting that the company typically struggles to staff during Red Cup Day because they are so busy.

Willow Montana, a shift supervisor at a Starbucks store in Brighton, Massachusetts, planned to go on strike because Starbucks failed to start negotiations with the store despite a successful union vote in April.

“If the company isn’t bargaining in good faith, why would we work where we’re understaffed, underpaid and overworked?” Montana said.

Others, including Michelle Eisen, a union organizer at one of the first unionized stores in Buffalo, New York, said workers were upset that Starbucks promised non-union stores higher wages and perks. Starbucks says it abides by the law and can’t give union stores a raise without negotiating.

At least 257 Starbucks locations have voted to unionize since late last year, according to the National Labor Relations Board. Fifty-seven stores have held votes in which workers have chosen not to organize.

Starbucks and the union have started contract talks at 53 stores, with 13 additional meetings planned, Starbucks Workers United said. So far no agreements have been made.

The process was controversial. Earlier this week, a regional director of the NLRB filed a request for a preliminary injunction against Starbucks in federal court, saying the company violated labor laws when it fired a union organizer in Ann Arbor, Michigan. The regional director asked the court to order Starbucks to reinstate the employee and end its nationwide interference in the union organizing campaign.

Meanwhile, Starbucks has asked the NLRB to temporarily suspend all union elections at its US stores, citing claims by a board employee that regional officials failed to coordinate properly with union organizers. A decision in this case is still pending.