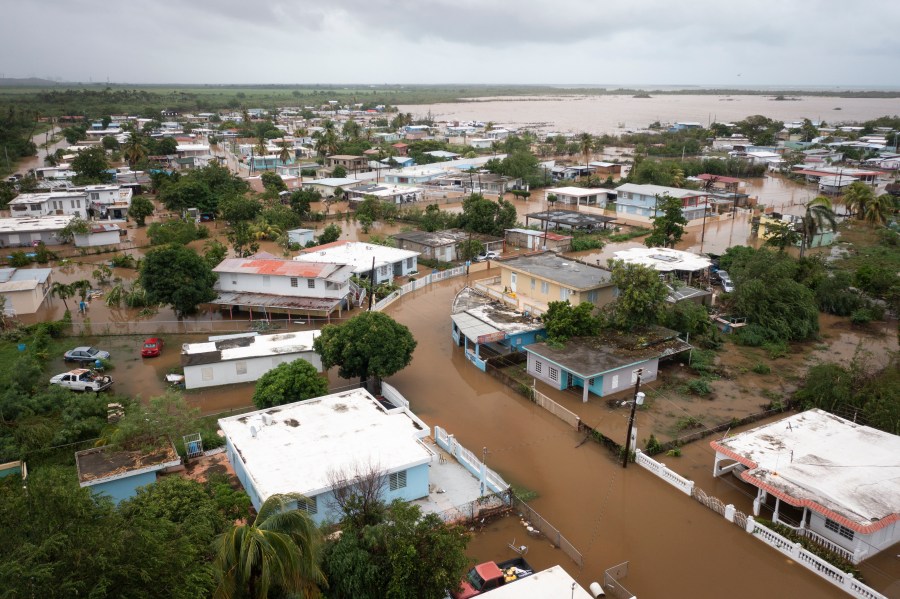 WASHINGTON (AP) — President Joe Biden will on Monday survey the damage caused by Hurricane Fiona in Puerto Rico, where tens of thousands of people are still without power two weeks after the storm hit.

The Category 1 hurricane disrupted power to 3.2 million people on US territory, 44% of whom live below the poverty line.

Power has been restored to about 90% of the island’s 1.47 million customers, but more than 137,000 others, mainly in the hardest-hit areas of Puerto Rico’s southern and western regions, continue to struggle in the dark. Another 66,000 customers are without water.

Biden has promised the US government will not abandon Puerto Rico as it begins rebuilding, five years after the stronger Hurricane Maria devastated the island in 2017.

During his visit, Biden planned to announce that through last year’s bipartisan infrastructure bill, the government will allocate $60 million to help Puerto Rico shore up levees, strengthen flood walls and create a new flood warning system to help the island do better is prepared for future storms, the White House said.

“We see what you’re going through and we’re with you,” Biden told Puerto Ricans and Floridians in a message Sunday on his official Twitter account.

Florida is cleaning up after Hurricane Ian swept across the state last week, killing more than 60 people, decimating some coastal communities and flooding others. Biden plans to visit Florida on Wednesday to assess the damage.

The president was scheduled to land Monday in Ponce, Puerto Rico, a city on the south coast, accompanied by First Lady Jill Biden and Deanne Criswell, the administrator of the Federal Emergency Management Agency. Most storm damage is in southern Puerto Rico.

“We will ensure we continue to work together to ensure the continuity of a recovery already underway,” the governor tweeted on Sunday.

Fiona caused catastrophic flooding, destroyed roads and bridges, and triggered more than 100 landslides when it struck Puerto Rico on September 18. At least two people died after being swept away by floods and several others were killed in accidents related to the use of candles or generator during the island-wide blackout.

Government officials have estimated the damage at around $3 billion but warn the cost could increase significantly as the evaluations progress.

Some people in Puerto Rico wondered if Biden’s visit would make a difference, recalling President Donald Trump visiting after Hurricane Maria in 2017 as a stronger Category 4 storm, bringing rolls of paper towels in a crowd into one crowd that upset many.

Manuel Veguilla, a 63-year-old retired mechanic who lives in a remote community in the hard-hit northern mountain town of Caguas, said he didn’t expect his life to improve after Fiona cut his neighborhood off from the effects no help for a week.

“They always offer the kids the lollipop,” he said, referring to Biden’s visit. “But in the end the result is always the same. Aid goes to those who have the most.”

“We didn’t leave Puerto Rico,” she said on CBS’s “Face the Nation.”

Criswell said on ABC’s This Week that FEMA personnel were dispatched to the island before the storm hit and that “they will stay with the people of Puerto Rico” during recovery efforts.

Biden recently told Pierluisi that he approved 100 percent federal funding for a month for debris clearance, search and rescue efforts, restoration of power and water, shelter and food.

The island’s lack of electrical power led to the temporary closure of businesses, including gas stations and grocery stores, as fuel supplies ran out due to heavy use of generators. As a result, many cheered the Biden administration’s decision to temporarily waive a federal law to allow a British Petroleum ship to deliver 300,000 barrels of diesel.

Rubio said the island “appears to be in a better position to respond this time” as personnel and supplies were deployed ahead of the storm’s arrival and part of Puerto Rico’s power grid had been rebuilt after Hurricane Maria.

“We will do everything we can, which we have always done, to help Puerto Rico recover now from yet another devastating storm,” Rubio said on CNN’s State of the Union.

https://wgntv.com/news/were-with-you-biden-tells-puerto-rico-ahead-of-visit/ “We’re with you,” Biden tells Puerto Rico ahead of the visit

Activity Brando's Oscar turned down was 75

TikTok sales in Europe have increased almost six-fold in 2021

Who is she and what power does she have?