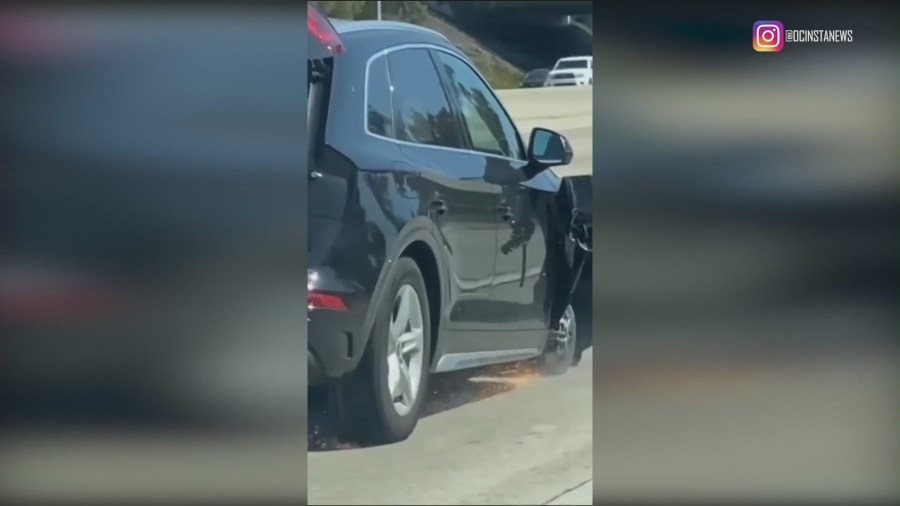 (KTLA) — A motorist on the 405 Freeway in Orange County, California, was caught on video driving her vehicle with the tailgate fully open and a missing front passenger-side tire.

“Rather dangerous situation here on the 405, tailgate open. No tailgate party in sight,” Instagram user Chad Towersey, who captured the video, can be heard saying.

Sparks fly from the passenger-side rim as the woman drives down the lane, seemingly unaware of the situation.

The vehicle also looked like it had recently been in an accident.

Christian Walker to his father: “Wear a condom”


Towersey and another driver pulled in front of the woman and were able to slow her and steer her off the freeway.

When the woman finally stopped and was confronted by Towersey and the other driver, she appeared disoriented and claimed there was nothing wrong.

“You’re on drugs right now. They’re on painkillers,” Towersey is heard saying to the woman, who denies it.

“I’m not. Oh my god, absolutely not,” she is seen saying.

According to Towersey, the woman had no idea what was going on and how many people she was endangering.

In an emailed statement to KTLA, the Irvine Police Department said it was aware of the online videos and indicated the woman was not arrested but the matter remains under investigation.

The vehicle involved was confiscated as part of the investigation.

“Alleged illnesses can make driving under the influence of alcohol more difficult and must be taken into account in this case,” the statement said. “The IPD is conducting a thorough investigation into this matter, which is being referred to the Orange County Attorney’s Office.”

Towersey told KTLA that earlier in the day another man tried to help the woman put a spare tire on the car, but that she took off while her vehicle was on a jack.

Hurricane Julia is expected to form over the Caribbean this weekend

The firefighter’s family paid $2.7 million in a fatal accident while off duty