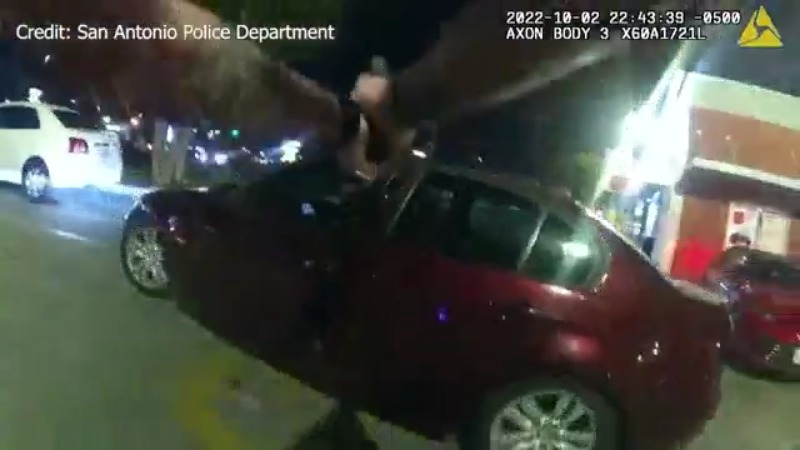 SAN ANTONIO (WFLA) — A Texas police officer has been fired after shooting two teenagers in a McDonald’s parking lot and taking one to the hospital.

The San Antonio Police Department released bodycam video Wednesday showing the incident between the two teenagers and the officer around 10:40 p.m. last Sunday


Capt. Alyssa Campos, a SAPD training commander, said the officer responded to a jamming call at a McDonald’s and while gathering information noticed a car swerving around him on Saturday.

According to police, the car had nothing to do with the incident. The officer previously tracked the vehicle because the license plate did not match the vehicle, leading him to believe it was stolen.

After calling cover, the officer approached the car and abruptly opened it, prompting the teenager in the vehicle to get out of the car.

Bodycam video showed the officer suddenly reaching out to the 17-year-old driver, who began backing the car with the door still open.

The door eventually hit the officer, who then shot the teenager as he drove away.


“Shots fired, shots fired!” he said after shooting at the minors and running after them.

The two teenagers were found a block away from the crime scene. The 17-year-old driver was shot multiple times and taken to hospital, according to police. The young girl in the passenger seat was not injured.

Campos said the 17-year-old was charged with assaulting a peace officer and evading custody. However, the officer, who was with the force for just seven months, was fired.

“The department terminated the probationer’s employment due to his actions during this incident that violated department tactics, training and procedures,” Campos said.

The investigation into the incident is still ongoing.

Over $300,000 available for Pennsylvania farms

Hulu will not run Democrat ads about abortion or guns