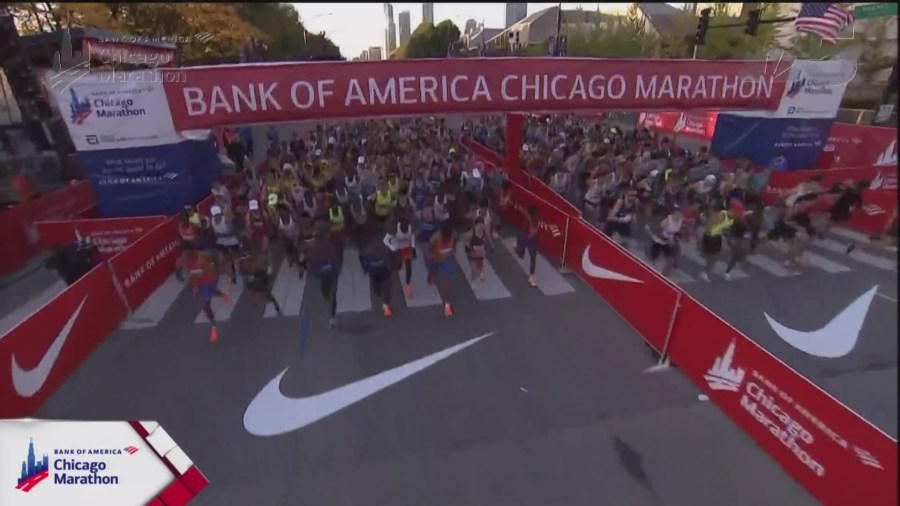 CHICAGO — With the 2022 Bank of America Chicago Marathon in the books, we take a look back at this year’s race.

According to a post-race press release, more than 40,000 runners took to the streets of 29 Chicago boroughs for the 44th edition of the race, the highest total attendance since the COVID-19 pandemic.

In the elite competition field, the women’s race turned into a world record chase, with Ruth Chepngetich flying out of the gates with a first mile of 4:47.

The 2019 world marathon champion set a mile pace of less than five minutes until the seventh mile, when she checked in at 5:02 a.m. Chepngetich maintained the world record pace over the 40km mark but lost speed in the final kilometers before crossing the finish line in 2:14:18, just 14 seconds off the all-time fastest time.

Emily Sisson, the American half marathon record holder, finished second to Chepgnetich with a marathon time of 2:18:29, which set an all-time record for American women marathoners.

In the men’s race, Benson Kipruto used a characteristic late-race climb to extend his lead before taking first place with a personal best time of 2:04:24.

Conner Mantz attempted to break the American men’s marathon record, but was just 20 seconds short. Mantz’s time of 2:08:16 is good for the seventh fastest time in US history.


2016 and 2017 Chicago Marathon winner Marcel Hug broke the longest-standing record on Sunday’s event. Hug crossed the finish line in 1:25:20 in the men’s elite wheelchair competition, a full 96 seconds faster than the previous world record of 1:26:56 set by Heinz Frei in 2010.

Susannah Scaroni rode to a dominant win in the women’s elite wheelchair race with a time of 1:45:48, nearly four minutes faster than second-place finisher Tatyana McFadden (1:49:46), a nine-time Chicago Marathon champion herself.

https://wgntv.com/news/chicago-news/sisson-sets-american-womens-marathon-record-chepngetich-finishes-with-2nd-fastest-womens-time-ever-at-2022-chicago-marathon/ US women’s record by Sisson

Raleigh police officer killed off duty, another shot in an active gunner situation