The Pentagon has announced that it will teach Ukrainian troops how to use Patriot missile systems in the US, marking one of the few occasions that Kiev’s forces have received training on American soil since last year’s full-scale invasion of Russia.

The program, which is expected to begin next week and last several months, will take place at Fort Sill in Oklahoma, where the US is training its own troops to use the Patriot, Pentagon Press Secretary Patrick Ryder said Tuesday.

The US will train 90 to 100 Ukrainian soldiers who will learn to operate, service and maintain the Patriot system or battery. This number of service workers is roughly equivalent to the amount required to run a single battery.

Ukrainian officials have long sought delivery of the Patriot, one of America’s most advanced air defense systems, which will play a crucial role in helping Kyiv maintain an integrated air defense structure. The US has promised Ukraine a Patriot system and Germany has said it will send one.

Each Patriot battery contains a truck-mounted launch system with eight launchers, each capable of holding up to four interceptor missiles. The battery also has ground-penetrating radar, a control station, and a generator. The US Army has 16 Patriot batteries.

Ryder said the US Army is shortening the typical length of the Patriot training program so the systems can be deployed in Ukraine as soon as possible. 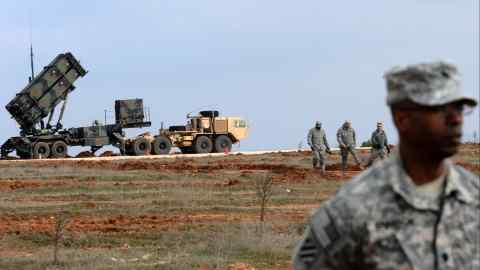 Since Russia invaded Ukraine last February, a small number of Ukrainian troops have received limited training in the US, including how to operate switchblade drones.

The US is also expanding efforts to train Ukrainian troops in Europe, with training of larger units for more complex military maneuvers due to begin this month.

As part of this program, the US will train 500 Ukrainian soldiers in Germany every month. It has trained more than 3,100 Ukrainian forces since the start of the all-out war, including the use of Himars and howitzers.

Ryder said there are no future plans to train other Ukrainian armed forces on the Patriot system, but added that this could change. The US-based training is limited to Patriot operators, he said.

Saudi Arabia steps into the spotlight at Davos