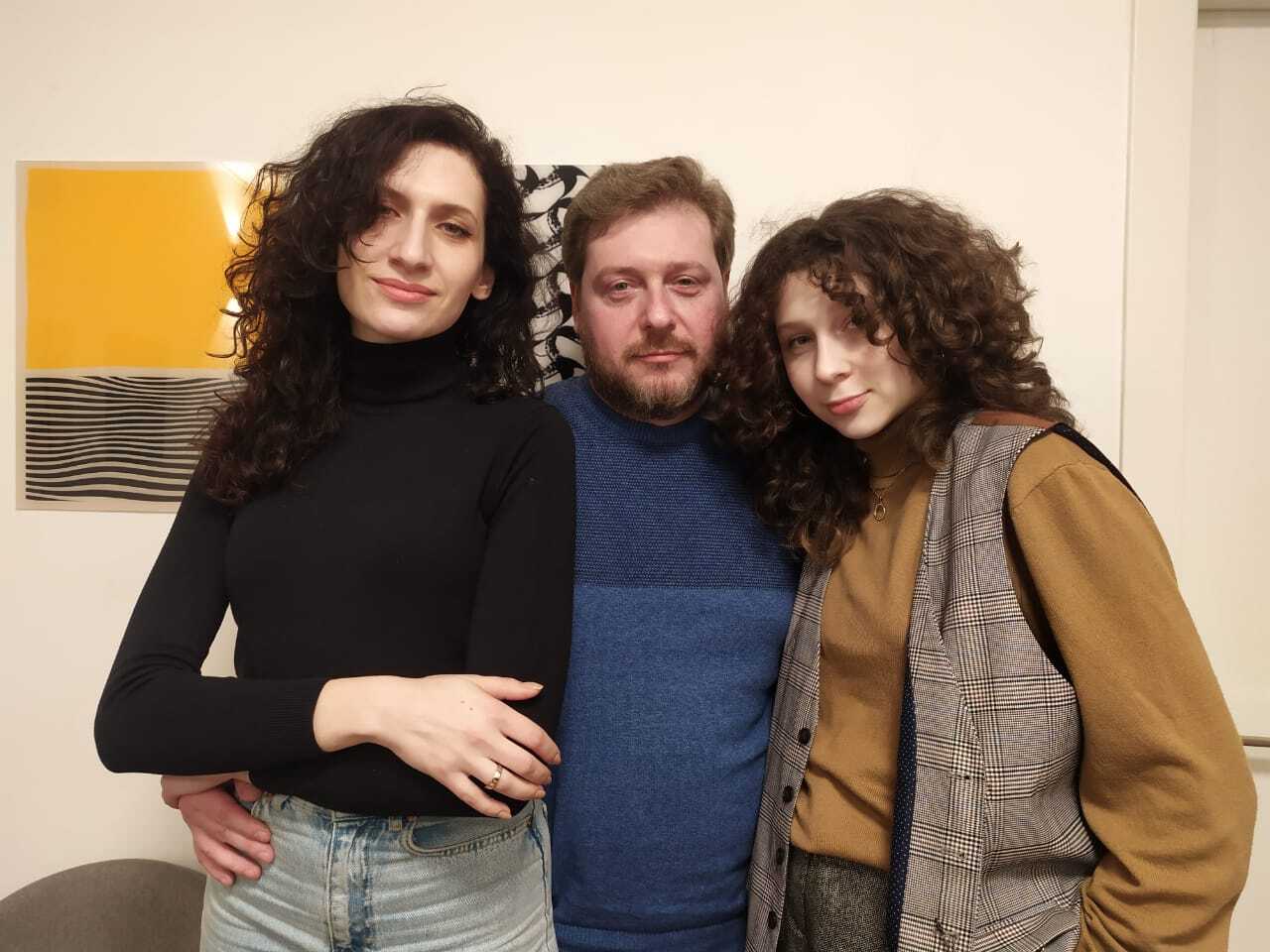 The bombing of Ukraine had already begun, but Ilya and Yuliia Tregubov could not bring themselves to go.

The couple, both 40, lived with their 14-year-old daughter Asya in Dnipro, a scenic city in central Ukraine. Ilya was a psychiatrist at a Jewish medical center, and Yuliia ran business centers.

They enjoyed a quiet life, strolling along the city’s riverfront or just watching Netflix together. They vacationed in a summer house just outside of Dnipro, where they picked fruit from apricot, apple and cherry trees.

As the war intensified, the Tregubovs turned down offers to help them evacuate.

But then Russia began bombing civilian areas in Kharkiv and Kyiv. Ilya, whose grandmother worked as a medic with the Soviet army that liberated Auschwitz, thought of the Jews who did not flee during the Holocaust.

“We know that those who did not flee, who chose to remain in their cities, are not alive… and I thought this is the time,” he said.

More than 3 million people have fled Ukraine since the war began. The Tregubovs are among thousands of Jews who have moved to Israel as part of a rescue operation by the Israeli government and the larger Jewish community.

More than 2,000 Ukrainians have already been resettled under the “Law of Return,” which gives foreign-born Jews or people with certain Jewish relatives the right to Israeli citizenship. A 24-hour emergency hotline for Ukrainian Jews has received about 24,000 calls since the war began – a third from people wanting to resettle in Israel.

The Jewish Federation of North America has raised more than $24 million in humanitarian aid, including for those trying to reach Israel. The Jewish Agency, an organization that runs the hotline and helps Jews immigrate to Israel, is helping to bus Jews in Ukraine to hotels in Poland, Moldova, Hungary and Romania. Once there, families complete immigration paperwork — a process that would normally take months but has been slashed to a few days.

“That number is growing every day,” said Roman Polonsky, director of the Jewish Agency for the former Soviet Union, Eastern Europe and Germany. “You come exhausted. They come in the middle of the night. We try to speed up this process as much as possible.”

About 43,000 people in Ukraine self-identify as Jews, according to Sergio DellaPergola, a demographer and former head of the Institute of Contemporary Judaism at the Hebrew University in Jerusalem. He said a far larger number — an estimated 200,000 people — are eligible to immigrate to Israel under the country’s “law of return.”

Israel has long received waves of immigration triggered by economic crises or political instability. Among the most famous were secret air transports of Ethiopian Jews facing starvation and civil war in the 1980s and 1990s.

Israel “is a haven for Jews in need,” Prime Minister Naftali Bennett said at a recent government meeting. “That is our goal. The State of Israel has done this more than once in its history, and we will continue to fulfill this sacred task.”

Officials have also announced that they would grant temporary visas to about 20,000 Ukrainians who were in Israel before the war, most of them without legal status, as well as about 5,000 other Ukrainians.

Ukraine was once home to the largest Jewish population in Europe after Poland. The vibrant community, which included Jewish schools and theaters, began to dwindle after waves of anti-Jewish riots under the Russian tsars in the late 19th century, and the following decades led to massive migration to the United States.

An estimated 1.2 to 1.4 million Jews were killed in Ukraine during the Holocaust, according to Wendy Lower, a historian at Claremont McKenna College.

In recent decades, the population has declined dramatically. More than 300,000 Ukrainians moved to Israel between 1991 and 2019 under the Law of Return after the fall of the Soviet Union and Russia’s invasion of Crimea in 2014, according to DellaPergola, who also said the decline in the Jewish community was exacerbated by a high eldership population and a low birth rate.

It’s unclear what will become of Ukraine’s Jewish community — where synagogues have been converted into shelters — but their need for help is growing.

As of Tuesday, 4,820 of the 5,890 hotel beds reserved by the Jewish Agency in Eastern Europe were occupied. The agency expects about 30,000 Ukrainian refugees will move to Israel — a forecast that is changing fast.

“This is such an unprecedented and dynamic situation,” said Hadass Tesher, a spokesman for the agency. “We’ll be swamped on the ground.”

Families are often torn apart as Ukrainian men aged 18 to 60 are not allowed to leave the country. Some had planned to move to Israel before the war, while others have many questions about life there, Polonsky said.

“Our job is to help them not only logistically, but also psychologically — to make them feel like they will find a home in Israel,” he said.

On the afternoon of March 4, the Tregubov family packed three suitcases and left their apartment in Dnipro. They couldn’t bring their 5-year-old cat, Shunya, who Yuliia described as “part of our family.”

They took the train to Poland, traveling for about 20 hours in a carriage packed with several hundred people, as well as dogs and cats. The lights were turned off to avoid being attacked by Russian forces. It was hot and difficult to breathe, but passengers kept windows closed to keep young children from nagging in the sub-zero temperatures.

On the way, Ilya received disturbing news from his older brother. His 68-year-old mother, who lived in Perm, Russia, was in a coma after suffering a stroke. Shortly before, she locked herself in her bedroom and cried for hours, ashamed of Russia, he said.

When they reached the city of Lviv, the family took a bus to get closer to the border. Then they walked almost a mile with their bags to several thousand people who waited for hours to cross.

Adults tried to calm crying children by handing out candy, apples, or chewing gum. Ilya helped take care of a toddler who was sleeping on a suitcase while his mother went into the bathroom and held the child’s hand so he didn’t fall off.

They crossed Poland a few hours before dawn. Ilya said he was allowed to go because he was a citizen of Russia.

The relief was short-lived. When they arrived at a Jewish Agency hotel in Warsaw, he heard that his mother had died. The next day, Russia attacked Korosten, the Ukrainian town where she grew up.

A few days later, the family boarded a plane with other Jewish Ukrainians that landed in Tel Aviv at 1:30 am on March 10. In a large hall they were offered food and drink while their documents were processed.

“They tried to smile and say everything would be fine… You are not alone, welcome home,” Yuliia said of the Israelis welcoming them. “Everyone tried to encourage us.”

The Tregubovs are staying with a family in Givatayim, a town near Tel Aviv, and spent their first Shabbat dinner on Friday with relatives. But the tasks ahead are daunting – including learning Hebrew, renting an apartment and finding a school for Asya.

Yuliia feels safe but is distracted by text messages about airstrikes in Dnipro.

“All the time I look alert, alert,” she said.

Ilya admits that he cannot show his family all his feelings when he has to focus on what lies ahead. Before the war, he said, they lived “normal lives” built on simple things. A good apartment. A job.

“We were happy and now we’re starting again,” he said.