Three UK wealth managers have said they are unable to cope with strong demand from investors looking to exit property funds. This is another sign that an accelerating decline in government bond prices is forcing pension funds to reallocate their holdings.

Schroders said it will make some repayments originally due Monday by July next year, while Columbia Threadneedle said volatile market conditions have forced it to switch from daily to monthly payouts. At the same time, BlackRock also imposed new restrictions on withdrawals.

This shows once again how hard-to-sell asset-based funds struggle when the volatility that has dogged stock and bond markets all year urges investors to quickly claw back cash.

A liquidity crisis in the UK last week, triggered by falling government bond prices, has worsened the situation for some wealth managers as defined benefit pension plans, which are big investors in UK institutional property funds, are quick to sell a wide range of assets to meet demands for collateral.

“It’s a pretty weak market and you’ve thrown in some volatility. Switch to monthly repayments [from daily] reduces your need to sell assets,” said a real estate fund adviser.

Calum Mackenzie, investment partner at Aon, the pension advisor, added: “I think this is part of a longer-term trend in pension funds [cut risk] by selling the less liquid assets. . . This trend is now being reinforced by the short-term liquidity boost from pension funds in the past week.” 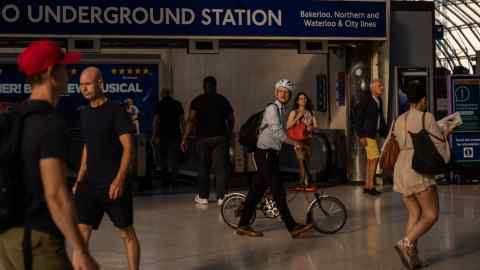 These forces have intensified at a time when conditions in private markets, including stocks, real estate and credit, are already strained. A sharp deterioration in credit conditions has made it difficult to close deals in unlisted assets, according to industry participants.

“It is expected that the deferred redemptions will be paid upon the successful completion of future asset sales,” Schroders said.

It is in the process of selling the Jubilee House, a high-rise redevelopment in Stratford, east London, which it bought in 2013 for £11.9million. Schroders has signed a deal to sell it for £63m, which is expected to be completed by April 2023.

These restrictions mirror previous crises when wealth managers imposed “gates” to prevent investors from making withdrawals from daily traded real estate funds in the wake of the Brexit vote and in the early months of the coronavirus pandemic in 2020. In both cases, professionals evaluating assets held by the fund struggled to provide an accurate price for commercial real estate projects.

Blind cords pose a hazard to children found in homes

Niecy Nash-Betts is the newest and oldest agent on The Rookie: Feds