An executive at a Toyota leasing subsidiary has warned that the world’s largest automaker faces an “unprecedented” challenge to revive its electric vehicle sales as it risks missing its already low target in Japan for a second straight year .

The bleak prospects for the bZ4X, Toyota’s first production all-electric car, which was recalled weeks after its launch in May, comes as people close to the Japanese group say it is reconsidering its plans to introduce battery-powered vehicles.

Unlike its competitors, who rely exclusively on electric vehicles, Toyota is focusing on growth through hybrid vehicles – both petrol and electric – and hydrogen cars. The company argues that not every country will be able to accommodate electric vehicles due to power restrictions and affordability.

Toyota is coming under increasing pressure from investors to refine its EV strategy as the botched launch of the bZ4X stokes concerns that the automaker is falling behind its rivals. Toyota resumed production of the bZ4X in October after addressing issues with bolts that could cause the wheels to come off.

“This was the first time in Toyota history that there was a recall immediately after launch, which resulted in production and sales being halted for several months,” said Shinya Kotera, president of Kinto, a Toyota leasing company -Subsidiary that exclusively ships the model to Japan.

“Toyota is in an unprecedented difficult situation and the recall threw [the bZ4X launch] off track,” Kotera said in an interview at a Tokyo office of Kinto.

Kotera said Kinto would fall short of Toyota’s annual sales target of 5,000 units of the bZ4X in its home market “first year through the next.” The leasing unit was forced to halve the one-time fee for orders to 385,000 yen ($2,900) to boost sales. In addition to Japan, the vehicle is available in the USA, China and Europe. 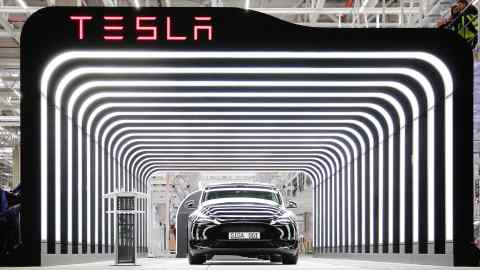 The lackluster domestic demand comes as Toyota is reviewing its electric car manufacturing process to make it more cost-effective. A new team led by Shigeki Terashi, a former chief technology officer, was formed last year, according to two people close to the company.

Reducing costs has been Toyota’s forte for decades, but “It’s possible that Toyota still doesn’t see how to drive down the cost of EVs,” Sugiura added.

Toyota declined to comment on sales prospects for the bZ4X, saying it has no details on development projects beyond those already announced.

In addition to rivals such as Tesla and Volkswagen, Toyota faces competition from new entrants such as Sony in electric vehicles. On Wednesday, the entertainment giant unveiled a prototype of its new Afeela EV, which is being produced with Honda and uses Qualcomm’s chips.

Quantumania' and fans rejoice when the mask is removed