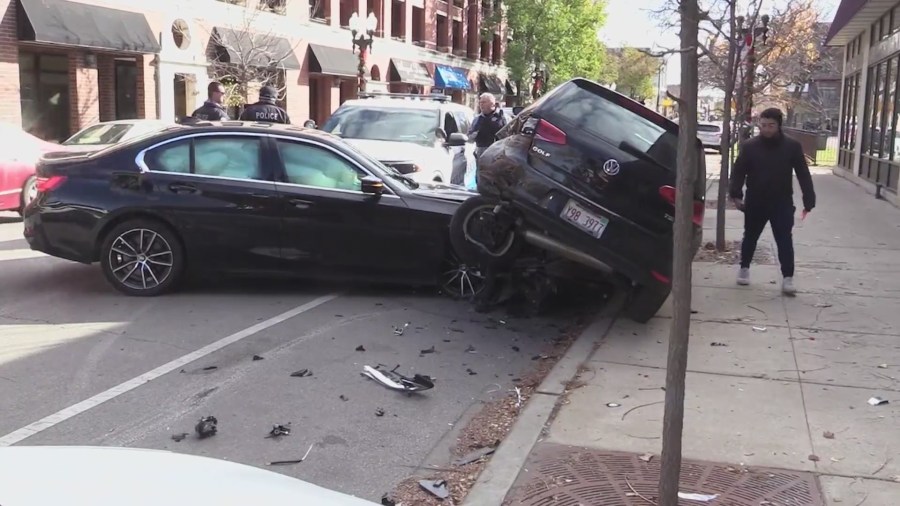 CHICAGO — A 2-month-old child was caught in the middle of a chaotic, bizarre crime involving car crashes and a car theft near Ravenswood on Sunday.

It all started in the 4700 block of North Clark Street, where a car crash involving at least five vehicles, including an unmarked police car, took place.

Amir Rouzati was one of the vehicle owners whose car was damaged in the accident. He believes that the car that did all the damage was also stolen and the driver also ran away shortly after.

“He originally hit a Lawrence police car and then he turned right and hit all these cars,” Rouzati said. “After that, I heard he ran on foot, hit another car or something.”

Police said just before 11 a.m., a 41-year-old man got out of his Honda in a parking lot on the 1500 block of West Lawrence Avenue when someone approached him and stole his car — with his 2-month-old inside.

Then, late Sunday afternoon, a car was struck on Lower Wacker Drive.

“He popped into us, we were deadlocked,” said Krista Tarrien, the driver who ended up in the back. “We were standing at the traffic light and a car hit our car. I didn’t really see what happened.”

As Tarrien’s vehicle swerved, a man jumped out of the vehicle, hit her from behind and slid through a gap in the ramp to run away. Moments later, a 2-month-old boy was spotted by police in the back seat.

“We all stopped, I saw the officers run to the car and they pulled out a baby,” Tarrien said.


The 2-month-old boy was taken to the hospital for an examination.

Police believe the accidents and the car theft are related and are continuing to investigate the series of incidents.

Police have a person of interest in custody and are questioning them about the accidents and carjacking.

How North Korea became a mastermind of crypto cyber crime