The US and Japan will announce they are expanding their security alliance into space to defend against satellite attacks amid growing concerns about the threat from China, US officials said.

Tokyo and Washington will announce the enhanced security cooperation later Wednesday in Washington, where US Secretary of Defense Lloyd Austin and Secretary of State Antony Blinken will hold talks with their Japanese counterparts.

The announcement, which comes ahead of Japanese Prime Minister Fumio Kishida’s summit with US President Joe Biden on Friday, marks recent efforts by Washington and Tokyo to step up cooperation to confront China and prepare for a potential conflict over Taiwan.

It also comes as China significantly increases its satellite presence amid growing military activity in space.

Since US President Joe Biden took office, the US and Japan have taken a number of measures to send a stronger message to Beijing, including staging war games and stepping up war planning.

While the US has taken an increasingly dovish stance on Beijing, the Chinese military’s aggressive activities around Taiwan have contributed to a marked shift in Japan’s position on the need to strengthen its security.

After years of urging Tokyo to strengthen its defenses, American officials have warmly welcomed the change, which was advocated by former Prime Minister Shinzo Abe but continued by his successors Yoshihide Suga and now Fumio Kishida, who is set to meet Biden.

A senior US official said the moves were a significant “change in steps” since March 2020, when Suga visited Washington and signed the first joint US-Japan communiqué in more than 50 years that mentioned Taiwan.

“What Kishida has done has gone much further than not only any other Japanese leader before him, but far further than we frankly thought politically possible,” the official said. “Basically, what Japan is doing is moving to the level of a senior NATO partner in terms of the type of appropriate military engagement, planning and investment.” 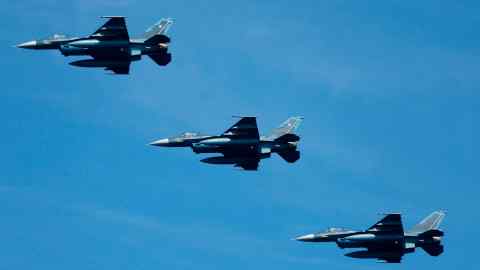 The senior defense officials and diplomats will also announce on Wednesday the long-planned deployment of a US naval regiment in Okinawa, which is expected to be completed by 2025. The unit includes advanced intelligence, surveillance and reconnaissance capabilities, as well as anti-ship and transport capabilities. officials said.

US and Japanese officials are also discussing Japan’s possible purchase of Tomahawk missiles.

Kishida’s visit to the White House, his first since taking office in late 2021, comes weeks after Tokyo outlined a radical security shift that will include significant increases in defense spending and the acquisition of countermeasures capabilities.

The five-year military budget boost includes 5 trillion yen ($38 billion) to buy Tomahawk cruise missiles from the US, which would allow it to strike targets in China.

Japanese officials say Kishida wants to use his meeting with Biden to demonstrate enhanced US-Japan deterrence and seek US cooperation ahead of the G7 summit he will host in May in his hometown of Hiroshima.

The UK economy is stagnating – and the reasons are profound

Ukraine and Russia: How bad have relations been since the collapse of the Soviet Union?