Kyiv has warned it would bring more companies under state control if they did not fully support the war effort after the government spearheaded the conflict against Russia to commandeer five industrial conglomerates.

Companies that Kyiv has taken over include Ukraine’s largest oil producer, Ukrnafta, and the largest oil refiner, Ukrtatnafta, both controlled by oligarch Igor Kolomoisky. The billionaire backed Volodymyr Zelenskyy’s 2019 presidential bid before becoming embroiled in an investigation into the bankruptcy of the PrivatBank he previously owned.

German Galushchenko, Ukraine’s energy minister, said the government is monitoring whether private companies and their management are solely focused on supporting the country’s military and economy.

When asked if more acquisitions might follow, he said: “We have to survive. . . that is the common task of all. Of course, if the state saw someone trying to play some games separately to fail that goal of protection from Russia, there would be some decisions.”

Galushchenko stressed that the measures are not nationalizations as state control is temporary and aimed at supporting the war economy battered by Russia’s military aggression. The owners would either get the assets back or receive compensation, he said.

Also under state control are aircraft turbine and helicopter engine maker Motor Sich, truck maker AvtoKraz and Zaporizhtransformator, which makes parts for the power grid. All were once owned by Ukrainian oligarchs.

Vyacheslav Boguslaev, former owner and president of Motor Sich, was arrested last month on charges of treason. Local prosecutors claim he violated sanctions by selling helicopter engines to Moscow. Both Kolomoisky and Boguslaev have denied wrongdoing.

Kyiv has released few details about its decision-making process that led to the takeovers or the financial compensation of private shareholders. The seizures follow laws passed last year to curb the influence of Ukraine’s wealthiest businessmen. Kolomoisky and Boguslaev have not commented on the state access. 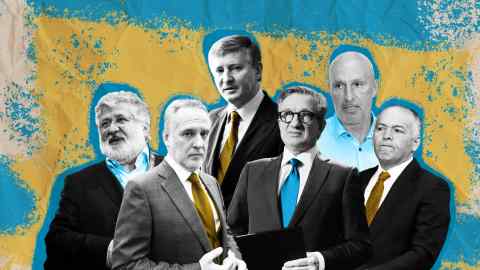 “I would expect that to happen sooner (in the war) rather than later if it’s really for the military,” Ryzhenkov said in an interview in London. “If it’s something else, like sanctions or something, then I understand that, but let’s face it. Let’s say loud and clear that these are sanctions for the people who own these companies and for their actions.”

Zelenskyy said on Monday some of the companies now under state control were “hardly working”. “Now they will all work for defense,” he said, adding that they will help repair and produce military equipment, supply defense forces and repair Ukraine’s infrastructure.

The government will try to turn them inside out financially, Galushchenko said. “I hope we can see the results as soon as possible,” he said.

Ukrtatnafta ceased operations after being hit by Russian rocket attacks in the first months of Moscow’s full-scale invasion of Ukraine. Exiled Ukrainian oligarch Kostyantyn Zhevago previously owned truck manufacturer AvtoKraz and Zaporizhtransformer was previously owned by businessmen such as Kostyantyn Grigorishin. Production at both AvtoKraz and Zaporizhtransformator has come to a standstill.

Ryzhenkov said the government had not considered taking control of steelmaker Metinvest, which is still making profits despite the damage caused by the war. The company is not a military supplier but has tried to help by making bulletproof vests and armored bunkers, he said. It has also provided excavators and trucks to build defense lines.

“If they want effective management of the company and help with the war effort, then we already do that,” Ryzhenkov said. “So we’re going to wait and see what’s going to happen to those few companies and we’ll understand the rationale behind the nationalizations.”

Akhmetov also owns DTEK, Ukraine’s largest thermoelectric power generator. A person close to the company said there was no indication that the government plans to take control of DTEK as well. They are “professionally managed and have been cooperative and supportive of the war effort,” the person added.

‘She’s all we’ve ever known’: Britain responds to life without its Queen