Donald Trump’s longtime chief financial officer told a Manhattan court he acted out of “personal greed” when he engaged in tax fraud when prosecutors presented evidence of payments to executives of the former US president’s business empire that they allege were made were kept “off the books”. .

Allen Weisselberg, who pleaded guilty to 15 charges in August, fought back tears as he testified Thursday that no member of the Trump family knew how he avoided paying certain taxes by renting a luxurious waterfront condo, Mercedes cars and college tuition for his grandchildren accepted by the Trump Organization without properly declaring them as income.

Under cross-examination by Trump Organization attorney Alan Futerfas, the 75-year-old confirmed that he believed the Trump family “trusted him to do the right thing,” and agreed that he had betrayed their trust. Weisselberg had previously testified that Trump himself signed many of the checks for his wife’s qualified accountant and undeclared benefits.

Weisselberg has been an employee for almost 50 years and has risen to become one of Trump’s closest advisers. He is the key witness in a criminal case brought by the Manhattan Attorney’s Office against the former president’s business units.

As part of a plea deal with prosecutors, Weisselberg, who is still being paid more than $600,000 a year from Trump companies, agreed to testify truthfully in prosecutors’ case against the Trump organization or face a maximum sentence of 15 years in prison.

Lawyers for the company are trying to prove that his illegal conduct over a 15-year period was not approved by Trump and his family.

During questioning by prosecutor Susan Hoffinger, Weisselberg explained how it was “convenient for the company” that he and other senior employees of the Trump Organization received benefits and bonuses that were not declared as part of their regular pay.

Prosecutors on Tuesday produced a lease signed by Trump for Weisselberg’s apartment on the Upper West Side. The former CFO also testified that Trump personally approved payments of $100,000 a year for his two grandchildren’s private schooling, though Weisselberg insisted he plans to repay the sum. 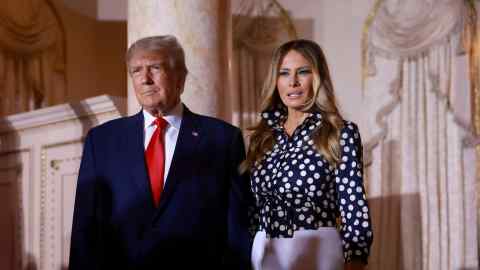 Trump stopped signing such checks when he became president in 2017, Weisselberg said. When Trump entered the White House, the company also began declaring executives’ perks as part of their salaries, he said, because management was keen that “everyone looks at our company from every possible angle.”

If convicted, the Trump Organization could be fined a maximum of about $1 million, a far smaller sum than the $250 million the company would have to pay if it loses a related civil lawsuit brought by of New York Attorney General Letitia James.

A guilty verdict in the Manhattan Attorney’s case could hurt the company’s ability to obtain credit and do business, and provide ammunition for Trump’s political rivals as he seeks to run for a third time as the Republican presidential nominee.

https://www.ft.com/content/a5fc8aae-e9d1-4add-be70-0c2ce3db6b3e The Trump Organization’s ex-CFO says he acted out of “personal greed.”

Mexican Xin Xin could be the last panda in Latin America

The Amazon rainforest is losing its ability to recover from destruction

Fed officials signal tightening interest rates may be needed “for some time”.

Goldman’s Lloyd Blankfein warns of a “very, very high risk of a recession”.