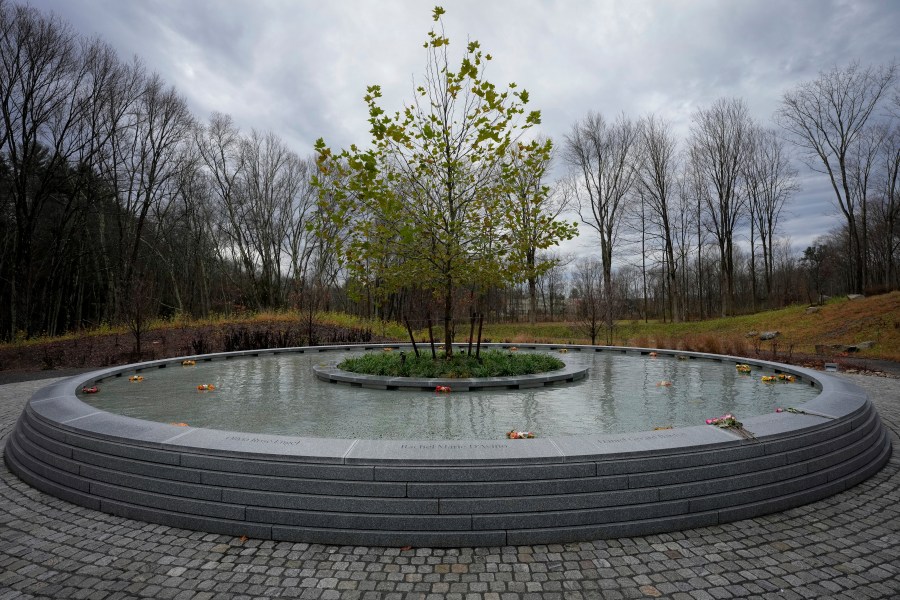 NEWTOWN, Conn. (AP) – Bouquets floated counterclockwise in the water of the circular memorial pool, passing the engraved names of the 20 first graders and six educators who were killed a short distance away at Sandy Hook Elementary School nearly 10 years ago.

The long-awaited memorial to the victims officially opened on Sunday, attracting visitors throughout the day. There was no ceremony, in keeping with Newtown’s tradition of commemorating anniversaries and other reminders of the shooting with contemplation.

“It just takes your breath away,” said Nora Smith, a resident of nearby Monroe who visited the memorial with her husband Kevin. “It’s something you hold dear because you feel so bad for these families.”

A path from the small parking lot leads down a hill to the focal point of the memorial — an artificial water feature with a plane tree sprouting from an island in the center. The 26 names are carved into a stone wall at the top that supports the pool. A paved walkway surrounds the feature, whose outer ring is lined with black-eyed susan flowers. Other trails lead past a variety of plantings on the site.

After the leaves have fallen, the new Sandy Hook School is now visible from the memorial. The new school was built on the same lot but not in the same footprint as the old one, which was demolished after the December 14, 2012 shooting.

Victims of relatives were offered a private tour on Saturday. Others, including Jennifer Hubbard, used to visit us by private appointment. Their daughter, Catherine Violet Hubbard, 6, was one of the children who died in the shooting.

“It took my breath away to see Catherine’s name and to see what was created to honor those who lost … the families, the survivors — they lost their innocence,” she said. “And the community. We all suffered from December 14th.

“I think the memorial is so perfectly suited to honoring a day and providing a place for contemplation and reflection that really changed the country,” said Hubbard, who is now executive director of the Catherine Violet Hubbard Animal Sanctuary in Newtown .

Nelba Marquez-Greene, whose 6-year-old daughter Ana Grace Marquez-Greene died in the shooting, thanked those who worked for years to plan the memorial on Twitter on Saturday.

“10 years. A lifetime and a blink of an eye,” she wrote. “Ana Grace, we’ve always been waiting for you to come home. Now you’re waiting for us. Hold on, little one. Hold on.”

Several visitors declined to speak to the few reporters present on Sunday. Others discussed their thoughts but declined to give their full names, saying the day was dedicated to the victims. Many in Newtown are concerned about the media onslaught that descends on the city each anniversary of the shooting.

“Today is a difficult day,” said a tearful woman as she returned to her vehicle after touring the memorial.

Occasionally, city police would drop by the site, which is also fitted with surveillance cameras.

Visitors can get their first glimpse of the memorial from the small parking lot overlooking the site. At the start of a path leading down the hill, a plaque greets visitors and includes a quote from former President Barack Obama when he spoke at a vigil in Newtown two days after the shooting.

“Here in Newtown I come to offer the love and prayers of a nation,” the Obama quote said. “I am well aware that mere words cannot erase the depth of your sorrow, nor can they heal your wounded hearts.

“I can only hope that it helps to know that you are not alone in your grief; that our world too has been torn apart; that we wept with you throughout our land,” the plaque reads.

The project faced several challenges after the city appointed a special commission to oversee memorial planning in the fall of 2013. Some proposed locations were rejected, including one near a hunting club where gunfire was heard, and officials reduced the project’s $10 million cost over concerns that voters would not approve it.

City officials say the memorial will be open this winter for as long as the weather permits, before reopening in the spring.

For Newtown First Selectman Dan Rosenthal, the city’s top elected official, the memorial is both a silent and intense tribute to those killed in the shooting.

“When you’re down in the hollow by the water, there’s a very peaceful serenity to it,” he said. “You’re standing by this water feature and the size… There are 26 capstones at the water’s edge, it’s quite overwhelming.”

Democrats must balance rhetoric and reality after the midterms

Spread Kindness All Year Round | SWING 15

Where is Dulce Martínez? The woman’s body has still not been recovered after she went missing when she quit her job in Hempstead