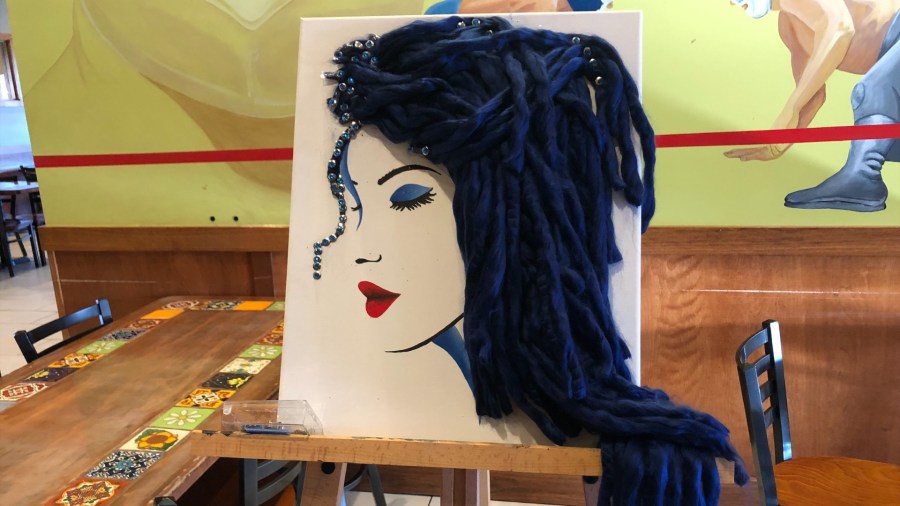 Gricelda Mata, the owner of Lindo Mexico RestaurantHer birthday is also in September. Every year she celebrates by trying to do something for someone else.

“I’ve always said that my business is a tool to help others,” Mata said.

It was her 20-year-old good friend Yeli Romero who mentioned Alopecia Awareness Month. Romero is battling the disease himself, so offering the restaurant’s help was a no-brainer for Mata.

Lindo Mexico hosted Noches Azules, or Blue Nights, every Thursday, where a portion of sales from the Blue Margarita goes to a fund to buy wigs for people with alopecia who can’t afford to buy one.

Mata also had one of her employees paint a woman’s face on a canvas, and customers could donate money to add strands of hair to the woman’s head.

“Sometimes as someone who has hair it’s hard to get the full picture, but when you talk to someone and they tell their story, you start to understand things that you didn’t know. And talking to Yeli, she enlightened me about things I didn’t even know,” Mata said.

Romero was diagnosed with alopecia at age 19 and hid her condition for 20 years.

“When I bought my first wig, I remember it was very expensive. It wasn’t the one that looked like my hair. I didn’t get any support,” Romero explained.

In 2021 she finally presented her story. As a Zumba instructor and business owner, she is well known in the community.

“Since then, people have reached out to me. I created this community that I want to support. The idea was just to raise awareness and support people who can’t afford to buy a wig and raise awareness of the respect we deserve,” Romero said.

She has heard stories of young children who took their own lives because they were bullied for having alopecia.

“That’s one of the things I want to say to parents; raising their children to respect others because they don’t know what the other person is going through.”

Fern Clark, 15, was diagnosed with alopecia at the age of 10. She recently switched schools due to the way she was treated.

She added that most of the time people don’t ask her why she’s bald. Instead, they make assumptions and occasionally harsh comments.

Christy Murphy, who also has alopecia, said the emotional toll is the biggest challenge.

“Just having self-esteem, self-worth, just not fitting in,” she said. “Often people assume I have cancer and then I feel bad when I tell them I don’t because they want to tell their story of what they’ve been through.”

Above all, all three ladies want to be respected. However, they believe this requires more understanding of alopecia. Murphy said she is grateful for Lindo Mexico’s efforts.

“This is the first time in Grand Rapids that I’ve known that any place has brought attention and awareness and it’s so great that the owner of Lindo Mexico is helping so much with financial support and others of us in the alopecia community simply supported raising awareness and helping others.”

https://www.woodtv.com/news/kent-county/restaurant-works-to-raise-awareness-about-alopecia/ The restaurant works to raise awareness of alopecia

The Chicago Park District’s security camera program is “riddled with inequality and neglect,” according to the Better Government Association.

The inclusion of grass is a growing trend for weddings