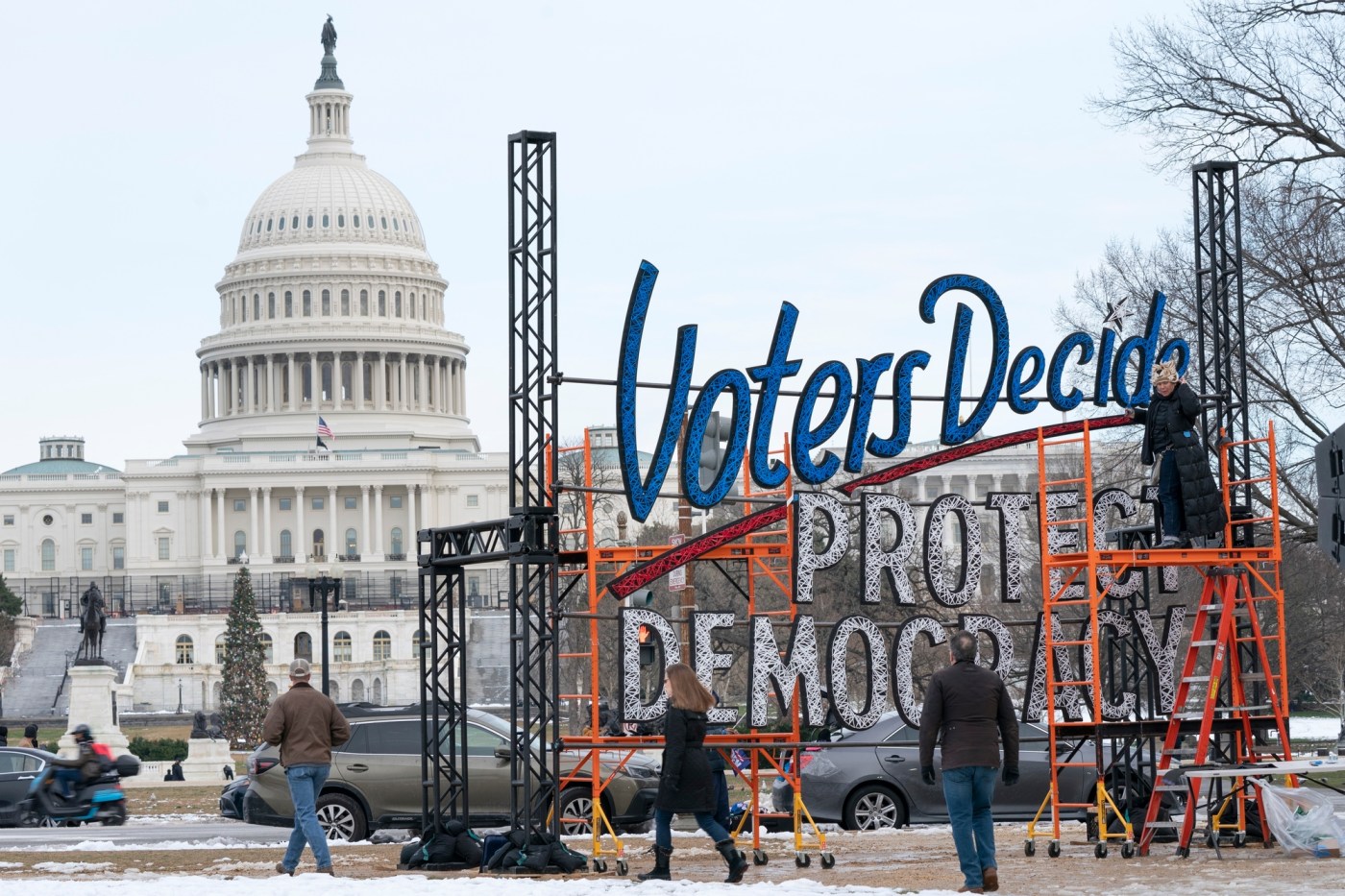 WASHINGTON — This week’s vote had an unspoken candidate — American democracy. Two years of relentless attacks on democratic traditions by former President Donald Trump and his allies have cast doubt on the country’s future, and voters have reacted.

Many of the candidates who supported the lie that Trump won the 2020 election lost races that would have placed them in a position to influence future elections. But the conditions that threatened the demise of democracy remain, and Americans view them from very different perspectives, depending on their policies.

In New Hampshire, voters re-elected Republican Gov. Chris Sununu to a fourth term, but rejected three congressional candidates who either supported Trump or aligned themselves with the former president. Instead, voters sent Democratic incumbents back to Washington.

Bill Greiner, a restaurant owner and community bank founder, said the Trump candidates won their Republican primary by “owning the crazy alley” and then provided Democrats with an easy playbook in the general election.

Greiner, a Republican, said he has sided with GOP candidates in recent years when his preferred candidates lost the primary, but he cannot vote for candidates who continue to deny the legitimacy of the 2020 presidential election.

“The election was not stolen, and anyone who leads and ends with an election denier is not going to do well,” he said. “I think that point has been proved with exclamation marks.”

Ahead of the midterm elections, President Joe Biden has spotlighted threats to American democracy, though critics have suggested it is a ploy to divert attention from his poor approval ratings and voter concerns about the economy.

On Thursday, Biden said the nation’s core principles stood the test: “There were many concerns about whether democracy would stand the test. And it did!”

Election Day showed that Biden was not alone in his concerns: 44% of voters said the future of democracy was their top concern, according to AP VoteCast, a comprehensive poll of more than 94,000 voters across the country. Among them were about 56% Democrats and 34% Republicans.

But among Republicans, those who identify as part of Donald Trump’s Make America Great Again movement were more likely than others to say the future of democracy was the most important factor in the vote, 37% to 28%.

Concerns about democracy have been shared by members of both major parties, but for different reasons: Only about a third of Republicans believe Biden was legitimately elected, according to the AP VoteCast poll, which shows the extent of Trump’s ongoing false claims about the choice have permeated his party.

Democrats, on the other hand, believed that the spread of electoral lies and the number of Republican candidates who repeated them were an attack on the very foundations of democracy.

Some of the most vocal candidates who denied the results of the 2020 presidential election ended up losing races for statewide offices that play some role in election oversight.

Trump and his supporters targeted races for secretary of state, the office that oversees voting in most states, after failing to annul the 2020 state election results.

The AP VoteCast poll also revealed the impact the false claims have had on how Americans view election security. It found that MAGA Republicans tended to lack confidence in the midterm vote — about half of MAGA Republicans overall were not confident the votes would be counted accurately, but only 3 in 10 of their non-MAGA peers were these concerns.

There was no widespread fraud or credible evidence that the 2020 election was tainted, as confirmed by federal and state election officials, extensive reviews in battleground states, and Trump’s own attorney general.

The former president’s fraud allegations have also been firmly dismissed by dozens of courts, including judges he appointed.

However, the conspiracy theories run deep. They provided fertile ground for sowing suspicions as fairly mundane troubles erupted in Detroit and Maricopa County, Arizona, on Tuesday. The issue was easily resolved, but not before allegations surfaced on social media, including posts from Trump.

Kari Lake, Arizona’s Republican gubernatorial candidate, raised the possibility of nefarious activities and said if she wins, she would call a special session to make massive changes to Arizona’s election laws.

Questions about elections were written directly on the ballot in several states.

In Nebraska, voters approved a voter ID proposal born after the 2020 election and false claims of fraud. Michigan voters approved a sweeping initiative backed by suffrage advocates. Among other things, it would expand the options for early voting, require state-financed return postage and offer mailboxes for postal voting. The measure also clarified that the Board of State Advertisings has only a “bureaucratic, not discretionary” duty to confirm election results.

A long-term victory should not be declared, said Ron Daniels, President of the Institute of the Black World 21st Century: “The white nationalist, white racist MAGA movement was controlled but not defeated.”

He said black voters in particular are aware of what is at stake. The resisters, who would potentially annul votes, were part of a long history of efforts to deny representation to people, particularly people of color.

The results were “dangerously close,” Daniels said. “We have to wait for the final result.”

Michigan Secretary of State Jocelyn Benson, a Democrat who won re-election against a candidate who repeated Trump’s 2020 falsehoods, said she was heartened to see concessions from candidates who had previously refused to view Biden’s victory as legitimate to acknowledge, or who repeated Trump’s election lies.

Among them was Republican Minnesota gubernatorial candidate Scott Jensen, who lost to the incumbent Democratic governor.

“Tim Walz is governor for four more years,” he told supporters. “Republicans, frankly, we didn’t have a red wave. It was a blue wave. And we have to stop, we have to recalibrate. We have to ask ourselves, ‘OK, what can we learn from this? What can we do better?'”

Jenna Ellis, senior legal adviser to Republican nominee for governor of Pennsylvania Doug Mastriano, said on her podcast, “There aren’t those kinds of concerns that we had in 2020. We can’t just say, ‘Oh my god, it’s all stolen. ‘ That’s ridiculous for this election.”

The fact that some of the strongest supporters of Trump’s claims have conceded may help “restore some of the norms of the democratic process that were shattered during Trump,” said Dartmouth historian Matthew Delmont.

The question now is whether democracy is safe or just safe today, he said.

https://www.ocregister.com/2022/11/10/future-of-democracy-weighed-on-american-voters-minds/ The future of democracy weighed in the minds of American voters