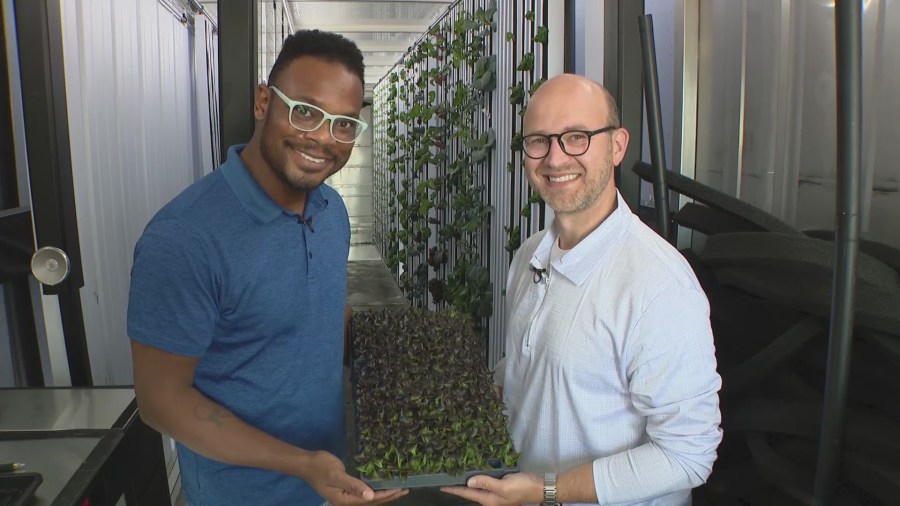 MOKENA, Illinois — When the pandemic caused them to reassess the future, one thing was certain: they would give back to those in need.

Derek Drake and Brad Schiever, who are taking an entrepreneurial leap with a new hydroponic farm while increasing access to fresh produce for everyone, are Chicago’s Very Own.

“I love the idea of ​​being able to control nature, sort of replicate it, and be able to grow food,” Drake said.

Drake and husband Schiever are the proud owners of Ditto Foods, a hydroponic farm that serves fresh produce year-round.

“We grow lettuce, leafy greens, herbs, and then we can grow root vegetables like radishes and baby carrots,” Schiever said.

The couple, who operate out of Mokena, opened Ditto Foods in March. This 320 square foot trailer delivers the equivalent of four acres of growers, all vertical.

“We can grow 8,000 plants at the same time in six to eight weeks,” said Schiever.

With shared backgrounds in food and hospitality, Drake said the idea came about during the pandemic when he was unemployed.

“It gave me an opportunity to do a kind of stop and level setting and really look at what I wanted to do next,” he said.

“We originally started the business with the idea of ​​creating an outlet because we didn’t have grocery stores in Ford Heights when we were young,” Drake said. “We had liquor stores and the local grocery store.”

To increase access to fresh produce, Drake and Schiever have partnered with Market Wagon, an online farmers market that serves many in the southern suburbs.

Ditto Foods also offers a discount program for families in Ford Heights and makes regular donations to the local pantry.

Cornerstone Development Associate Director Khamil Walton said the hydroponic facility has been helpful to his organisation.

“The fact that they’re doing it hydroponically and indoors allows them to dictate how many harvests and how many seasons we can get fresh produce at times of the year when we would normally have trouble getting discounts of this kind,” said Walton.

The entrepreneurs said they believe hydroponic growing is the future, but taking it to where it’s needed most remains the focus of their mission.

“But the goal is to still have a farm in Ford Heights because part of the narrative change has to be that the produce comes from Ford Heights,” Drake said.

https://wgntv.com/news/chicagos-very-own/couple-uses-hydroponic-farm-to-increase-fresh-produce-access-for-all/ The couple uses a hydroponic farm to increase access to fresh produce for everyone

Girl, 14, shot in the face on South Side

AP Source: Giuliani was interviewed for hours by the 1/6 Committee