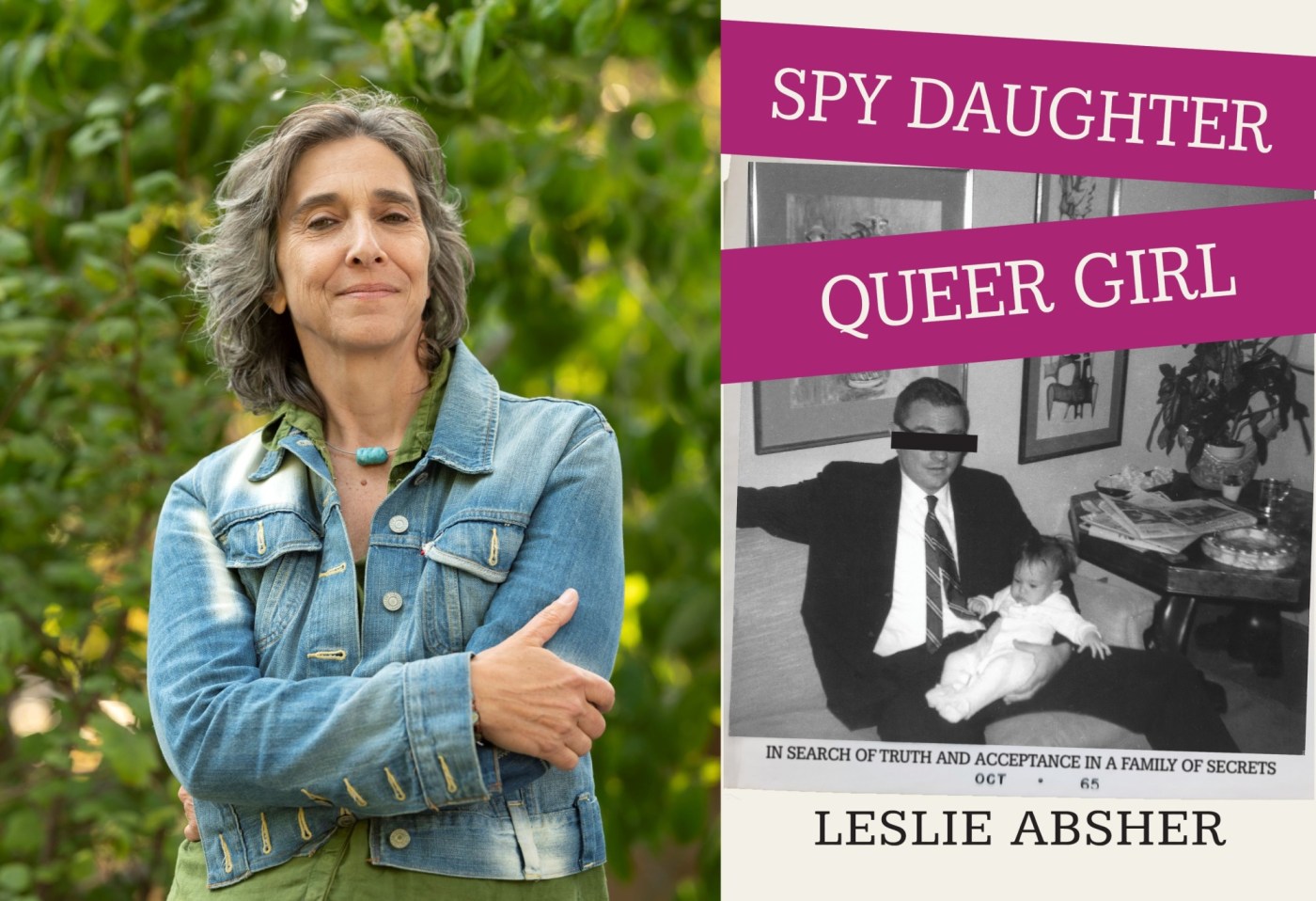 As Leslie Absher was growing up, her father was notable for both his presence and absence – even when he was there performing magic tricks at Leslie’s birthday party, her father never fully revealed himself.

Mike Absher was a CIA agent, which Leslie only found out after her mother insisted that she and her sister know the truth. They had lived in Greece during the military coup and later her father was in Vietnam during the war there. (Leslie’s mother died of cancer when she was a teenager.)

As Leslie got older, she began to hide a secret of her own: she was a lesbian, something she knew her father wouldn’t accept. Now, in Spy Daughter, Queer Girl, Absher shares how she had to examine her father’s life and career to come to terms with him while also learning to openly live as her true self.

She recently spoke via video from her home in Oakland. This interview has been edited for length and clarity.

Q. Her father was secretive and distant. Did the CIA mold him into this person or was he a natural fit for the CIA?

I think the CIA was a good fit for who he was. There was a family culture around silence and secrecy, and that helped.

Q. Your father lied to you about things – for example that he knew a CIA member who apparently broke official protocol in Greece. Do you have lingering doubts about your father and what he did, or did the completion of the book put that to bed?

I don’t lie awake at night, but there’s this gray area with the lingering doubts—not knowing will always be part of the story for me. I’m pretty clear on what he did at certain points, but I have to live with an incomplete understanding. I’m sure he knew this agent and knew him well. And this wasn’t the first time he misled me. The raunchy, untrustworthy father was inseparable from the father I always loved. It is strange.

Q. Has your research and experience influenced your view of the CIA or your feelings towards your father?

I think it did both. When I started I had a black and white view of the CIA and my father without much information. Then I waded into this investigation, trying as best I could to remain objective. In the end, I began to see nuances between the various CIA missions – some were successful, some were not, but I could see more complexity. It’s not black and white anymore. I don’t have a quick and easy CIA endorsement, but I don’t have the quick and easy conviction I once had.

Through this project I have met with other CIA spy kids, but also with ex-officers. I’m even going to be speaking to a former senior CIA officer in Virginia, so I’m letting them into my world more, which is ironic.

Q. Do you feel you need to be wary of them?

The CIA officials that I’ve been in contact with and allowed more into my life are pretty forward-thinking people. The CIA is full of individuals, each approaching things from their own perspective. But I’ll always be a little reticent.

Q. Growing up in the area you lived in made it difficult to trust people?

I had to make a conscious decision to let go of this bias of always saying, “What’s really going on here?” It became a shield that I needed growing up and I don’t need it anymore, but I will always unravel it – getting rid of this suspicious spirit is the great personal work I have done.

Q. You kept your sexuality a secret from yourself and then from your father. How was it when he refused to accept or acknowledge your truth for so long after you accepted who you were?

It was very painful. It started in my twenties when I came out to him in a letter and he turned it down. Then there was the silence. I was really angry. He didn’t accept something that brought joy into my life, so I thought, “What are you good for?”

I’m surprised I stuck it out like this, but I wasn’t able to walk away from him completely. We had our infrequent phone calls and visited every few years. I know my sister was also very disapproving of him for not coming to my engagement ceremony [wife] Suzanne. He was such a compartmentalizer and he was becoming more religious, so there were things that limited him.

My mother was more heart centered – they were both culturally conservative people from the late 50’s but I think she would have embraced me sooner or later.

Q. Are you generally cautious about secrecy?

The overarching story of my life is that I have put in a lot of work to live an open life. That’s how I’ve lived most of my life, whether it’s through the gay liberation movement or the feminist movement. I just live open and out. Because of these secrets, I felt so constrained that I made the decision to give up this life.

Q. Were there moments of doubt while writing the book?

It was a shame I carried privately for years, an inner fear that I was a bad daughter for investigating my father. i loved my father

When my first story was going to appear in the Los Angeles Times, he said, “You can’t say that, you can’t write that,” and I had to repeatedly give myself permission to put it on the page. It was traumatic because it was getting big and it was a bit ahead of where I was at the time. It was a big risk and I felt ready to be disowned again, like I was when I came out.

In the end, it’s a story of reconciliation, but it’s well deserved. But the biggest transformation for me was learning to trust myself. I dared myself to ask the questions, to somehow betray my father by investigating as best I could because I needed to know. Following my inner voice has been my guiding principle and while the end product is the book, the whole process has set me free. I feel stronger now. I trust the story I told.