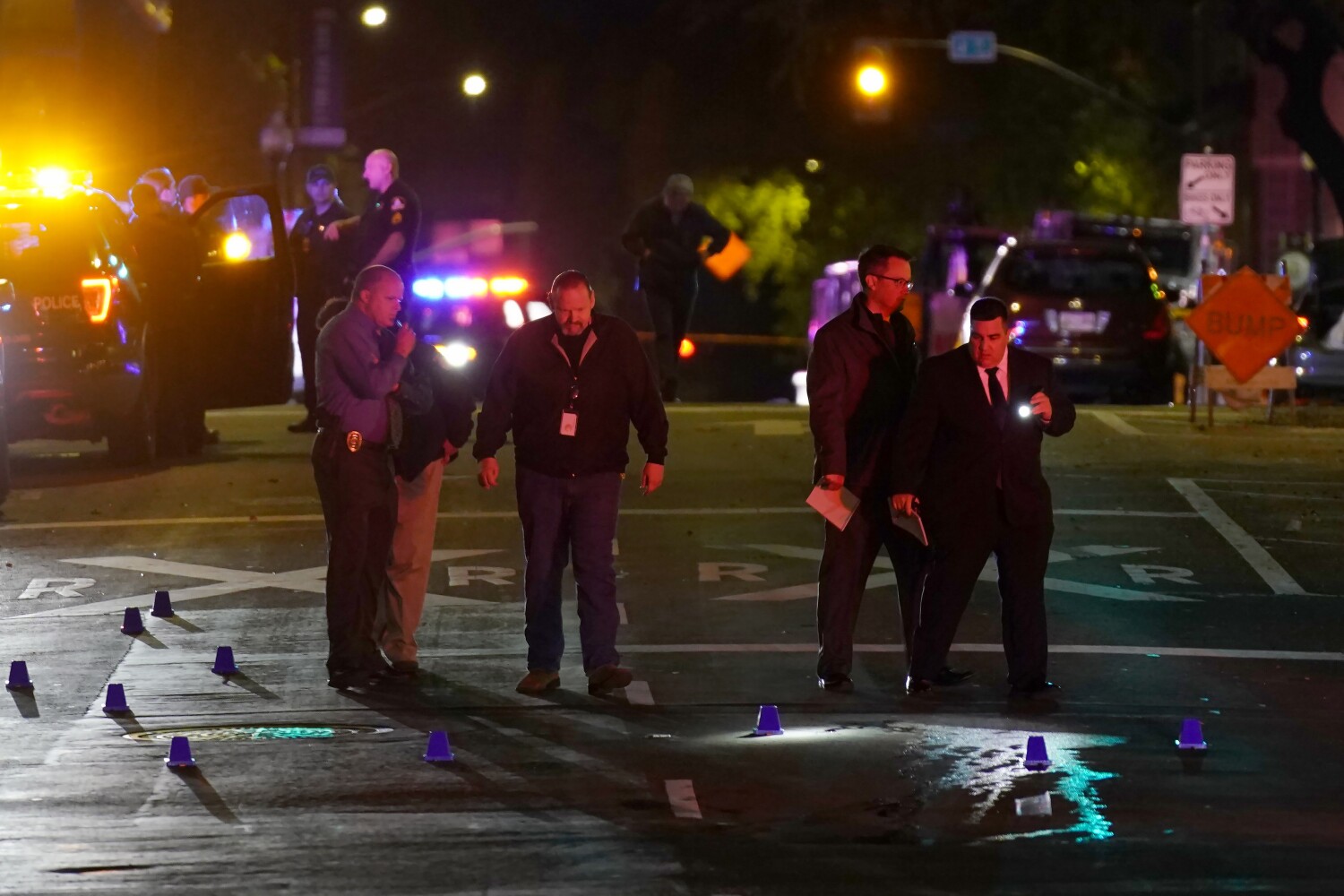 Father Michael O’Reilly stood on the steps of the Cathedral of the Blessed Sacrament in his long purple robe, gazing at a crime scene just a few yards away where more than a dozen pieces of evidence were laid out.

It was surreal, he told me, and he felt bad that one of his first thoughts was whether the church would be able to receive parishioners that morning with a mass shooting closing down street blocks around us.

But people were already wandering into this great cathedral, which is within sight of the State Capitol, unaware of the shooting or perhaps needing comfort because of it. Life goes on, even though there are still six bodies on the sidewalk. We accept, or at least endure, the unacceptable.

After all, this is her 12. Mass shooting in California this year. We all know what happens next. The process has already started. We are horrified. outraged. Saddened. I have a stack of press releases from politicians across the state trying to tell voters this is unacceptable.

I will not quote any of them. i think you know why

It’s all noise and fury for a gun violence crisis that has long gnawed at the soul of this country. People are dying every day, shot by those who don’t respect the law or life, or who are so unstable they shouldn’t have guns at all. All the time, the rest of us argue about whether the 2nd amendment protects the use of automatic weapons on our city streets.

But there was little discussion of gun rights among those I spoke to on Sunday morning as police collected shell casings and gory evidence, and the bodies of three men and three women waited to be collected in the unseasonably hot weather.

I stood behind police tape as family and friends tried to separate from the dozens of TV reporters whose cameras were trained on the tragedy and were turning in their reports for the afternoon news. Fred Harris, the father of Sergio Harris, one of the victims, pressed under the tape twice to confront officers and demand answers.

But the truth is there are no answers that will ease his pain. His son is dead. I have spoken to too many family members who have lost a loved one to violence. Many of them have shared this sad reality with me: nothing can make it right.

People I spoke to said there are more guns on the street than ever before. The pandemic, they said, has skyrocketed the number of all types of guns — the legally owned, ghost guns, which along with untraceable parts and guns are stolen, traded, imported, or otherwise not part of the official system.

Police found a stolen handgun at the scene, they said, and several people who were there Sunday told me about quick shots from a speeding car, the telltale sound of an automatic weapon being fired.

“Rat-a-tat-tat,” said Timothy Langier, a homeless man standing in a nearby doorway.

“Everyone has a gun now,” said Stevante Clark, a community activist who came to comfort the families of the victims. “Anyone who tells you otherwise is living under a rock.”

Berry Accius, another community activist with a long history of violence prevention, arrived downtown at 2 a.m. shortly after the massacre and was there for five hours when he and I spoke. He echoed Clark, telling me that earlier in the year he warned that we should be “laser focused” on guns post-pandemic. But nobody was listening then.

People are coming out of isolation with all these weapons. K Street, where the violence took place, is home to some of Sacramento’s most popular clubs. It’s pedestrianized, and on warm weekend nights it can be packed with revelers in the early hours, when the bars close and patrons pour out.

Because Sacramento is small and there aren’t many clubs to speak of, all kinds of people – some who don’t get along – find themselves crammed into K Street. Almost every night, Clark said, there are fights. For years, since this strip of downtown has attempted to revitalize itself after years of decline, there has been talk of keeping the peace on Kay, as city marketers called the section.

I don’t know if gangs were involved in what happened Sunday night. But as Leia Schenk, who also works on community issues, said, all those guns mean “you can’t have a fistfight anymore.”

Someone will pull a gun, and “then all these bystanders will be killed,” she said.

District of Sacramento County Atty. Anne Marie Schubert, who is running for attorney general on a crime-fighting platform, told me her firm has seen a 45 percent increase in cases filed for felons with gun possession since 2019. It’s not just Sacramento that’s experiencing this rise, she said. It’s happening all over the country.

“I’ve been shouting about how many illegal guns there are on the streets for over a year,” she said. “If you talk to every major city boss across the country, they will tell you the same thing.”

Schubert and I have been talking about this rise for months. She believes this is due to a combination of factors: people scared during the pandemic, rising economic inequality, organized unemployment scams that gave criminals millions in ill-gotten gains. It’s inevitable that COVID-19 will make things worse, she said.

So, California, that’s where we are. A gun crisis that was devastating before the pandemic has now been charged no matter who you ask. We all know it.

There will be a 13th mass shooting, a 14th, and a 15th. Steinberg called America’s attitude toward guns “one of the greatest indicators of irrationality and disease in our country.”

If there is a way out of this very dark gun violence wormhole, it is the possibility of an empowered majority of Americans waking up to the truth. The truth is that the 2nd Amendment can be protected without allowing easy access to offensive weapons.

These guns have been mistaken for a fundamental value of our democracy, somehow enshrined in our Constitution and Bill of Rights, but they are not. Nobody needs a machine gun for self-defense or anything else. Nobody needs to fire 600 shots in a minute.

Too often these weapons are about death, not self-protection. It’s about taking away the most basic right: the right to exist and to do so without fear.

As the sunset turns downtown back into darkness, I am left with the image of Pamela Harris, Sergio’s mother, bent into Clark’s arms and yelling at no one, “Why did you do this to my baby?”

And I can’t help but wonder, why are we doing this to each other?

https://www.latimes.com/california/story/2022-04-04/sacramento-shooting-gun-access-pandemic-worse-violence Sacramento shooting: The pandemic has worsened access to guns