The aluminum producer Rusal became the first Russian company to publicly call for a thorough and impartial investigation into the alleged war crimes in the Ukrainian city of Bucha and called for an early end to the conflict in Ukraine.

“We were shocked by reports from the Ukrainian city of Bucha. We believe that this crime should be thoroughly investigated,” said Rusal Dutch chairman Bernard Zonneveld in an opinion published on the company’s website.

Zonneveld, a former investment banker, called for an objective and impartial investigation and “harsh” punishment of perpetrators, “no matter how harsh it may seem in the context of the ongoing information warfare.”

A civil massacre in Bucha on the outskirts of Kyiv came to light after Russia withdrew from the Ukrainian capital and its environs. Kyiv has accused Russia of the killings, supported by testimonies given to independent journalists. Moscow said the massacre was staged by Ukrainian forces.

“Despite the brutality of current events in Ukraine themselves, such incidents make this terrible tragedy all the more traumatic. We all wish for an early end to this fratricidal war that is destroying lives, families and entire cities. And we want those responsible for such crimes to be properly punished,” said Zonneveld.

Zonneveld’s statement came weeks after Rusal’s largest shareholder Oleg DeripaskaHe, who had to give up control of the company after US sanctions against him in 2018, called for peace.

“I’ve been asked not to speak about it, but I really wish there would be peace first. There are casualties every day,” said Deripaska. “The priority is to stop this – I don’t want to name it – as soon as possible.” 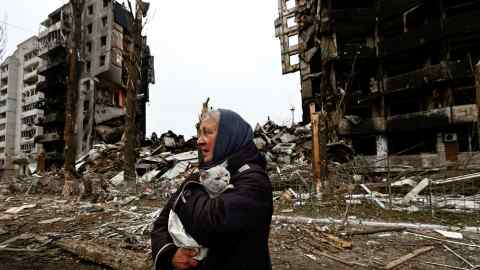 Rusal, the world’s largest aluminum producer outside of China, was one of the companies hardest hit by the international sanctions against Russia, although it was not affected by any of the current restrictions.

As one of the top aluminum exporters to Europe, it has lost access to raw materials from Australia, which has banned exports to Russia, which accounts for a fifth of Rusal’s alumina needs.

This was done through a joint venture with mining company Rio Tinto called Queensland Alumina Limited. On Thursday, Rio said it had taken full control of the deal.

“Our focus remains on ensuring the safe operation of QAL as a significant employer and contributor to the local economy in Gladstone and Queensland,” Rio said in a statement.

Sanctions could also restrict Rusal’s access to equipment, which could lead to investment projects being postponed, the company said last week. It was also forced to suspend its operations in Ukraine.

Though carefully worded so as not to take sides, some people close to the companies said their boards have been reprimanded by Moscow.

Rusal, listed in Hong Kong, is majority owned by EN+, a Russian metals and energy company founded by Deripaska.

The oligarch relinquished control of EN+ in 2019 in a deal that saw US sanctions against the company lifted for alleged interference in US politics. The businessman retains a 44.95 percent stake in EN+, but his voting rights are capped at 35 percent.

Deripaska, who remains a “specially designated national” by the US, is likely to be placed on the EU’s sanctions list as it seeks to tighten the screw on Russia.

He was included in the draft list because he owns a number of arms companies which the EU claims supplied arms used in the invasion of Ukraine.

https://www.ft.com/content/edd298ef-7e19-4bb4-a2d0-76f4295c3240 Russian aluminum producer Rusal is calling for an investigation into the Bucha war crimes

Odenkirk extends his stint at AMC with a new series