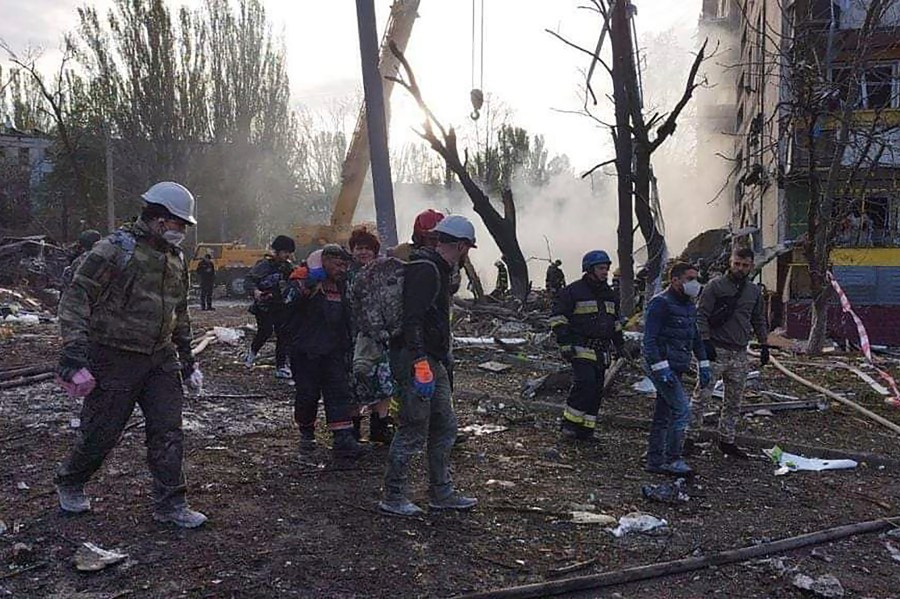 (The Hill) – Russian attacks in the city of Zaporizhia killed at least 17 people and damaged dozens of buildings on Saturday night, according to Ukrainian officials.

Anatoliy Kurtev, secretary of the Zaporizhzhia City Council, wrote on Telegram that 40 people were injured by the blasts, which he says also damaged 50 high-rise buildings, four educational institutions and 20 other private sector buildings.

“We urge citizens not to stay and visit places where emergency and rescue operations are being carried out due to the threat to the life and health of civilians,” Kurtev wrote, also calling Russia a “terrorist country.” .

Zaporizhzhia remains under Ukrainian control but is in a region that Russia annexed earlier this month with three other regions in eastern and southern Ukraine.

The town has faced Russian attacks in recent days, including one on Monday when Russia fired S-300 anti-aircraft missiles at the town and two nearby villages. This strike destroyed a rehabilitation center for children with special needs.

“Another Russian missile attack on the city of Zaporizhia,” according to Ukraine’s Defense Ministry wrote on Twitter. “17 civilians were killed. Had #UAarmy had modern western missile defense systems, we could have prevented such tragedies.”

The shelling follows an explosion Saturday on the bridge over the Kerch Strait, a key supply route connecting Crimea and Russia.

Russian President Vladimir Putin announced plans to build the road and rail bridge soon after his annexation of Crimea from Ukraine in 2014, and Putin himself personally inaugurated the bridge when it opened in 2018.

The bridge is widely unpopular with Ukrainians, who see it as a symbol of Russian occupation.

The blast was the latest setback for Putin in areas he claims to control.

Ukrainian forces have taken other small towns in the four regions it annexed, adding to the substantial territorial gains made by the Ukrainians in a recent counteroffensive that was primarily centered in the east of the country but has since stretched south.

Ukrainian President Volodymyr Zelenskyy vowed in his nightly address to recapture all Russian-held Ukrainian territory, saying it was “the best option” for Russian forces to flee “while they have the chance”.

“This is a future without occupiers,” Zelenskyy said. “On our entire territory, especially in Crimea.”