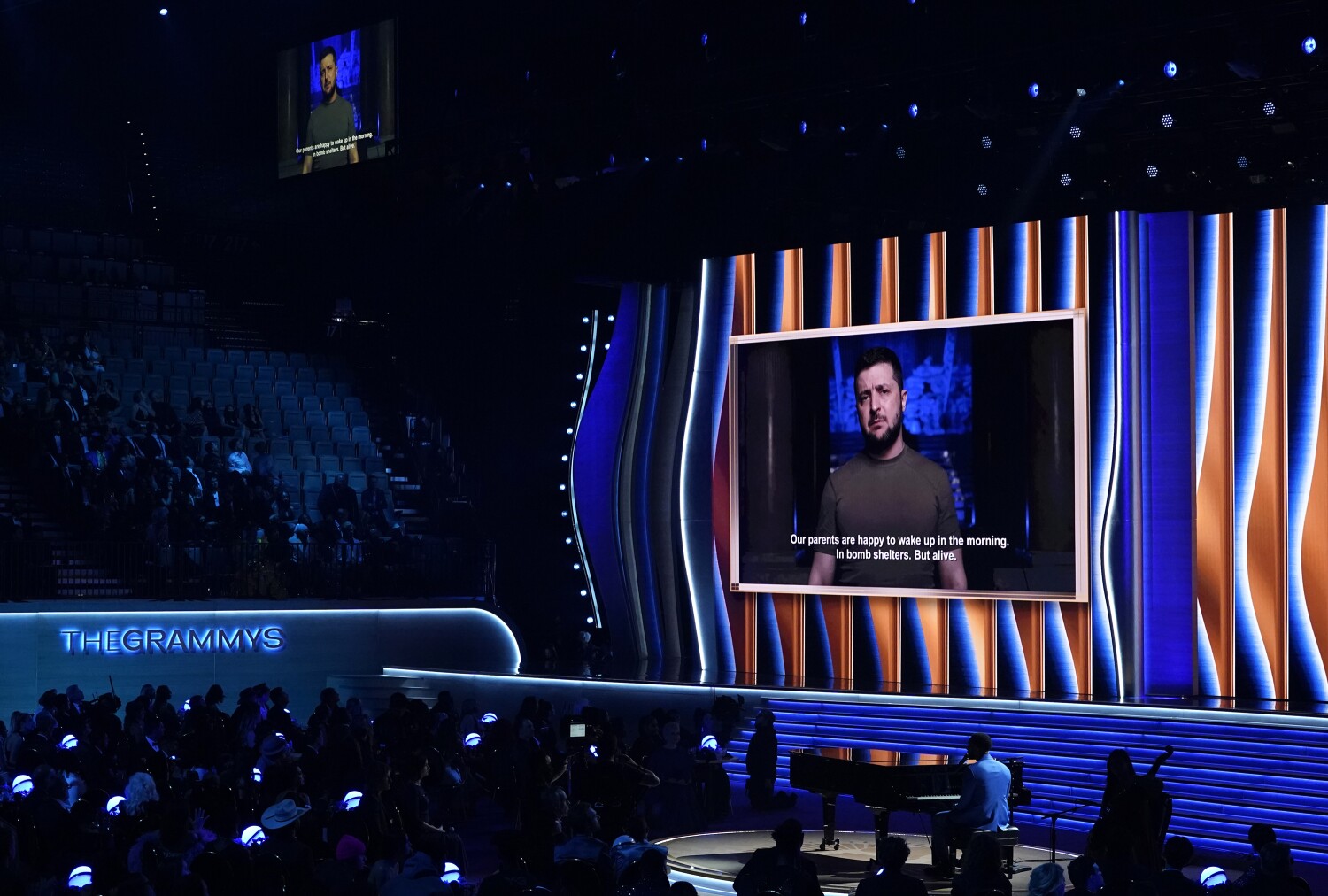 Ukrainian President Volodymyr Zelenskyy appeared on screen at the 2022 Grammy Awards on Sunday to deliver a powerful speech about the war in his home country.

Before singer-songwriter John Legend began a moving tribute performance of new song “Free,” Zelensky spoke via video about the devastation suffered by Ukrainians since Russia began invading that nation earlier this year.

“The war. What is the opposite of music?” he said. “The silence of destroyed cities and killed people. Our children paint flying rockets, not shooting stars. Over 400 children were injured and 153 children died and we will never see them paint.” .

“Our parents like to wake up in the morning – in bomb shelters, but alive. Our loved ones don’t know if we’ll be together again. War does not let us decide who survives and who remains in perpetual silence.”

During his Grammys set, Legend was joined by a few Ukrainian artists, including Siuzanna Iglidan, originally from Odessa; Mika Newton, whose sister serves in the Ukrainian army; and Lyuba Yakimchuk, who fled Ukraine days earlier. On stage they wore either blue or gold – the colors of the Ukrainian flag.

A huge screen behind the musicians flashed images of a bombed-out apartment building, a burning government building, families huddled in a subway station used as a bomb shelter, children being loaded onto evacuation trains and a crying mother.

“Our musicians wear protective vests instead of tuxedos. They sing for the wounded in hospitals – even for those who cannot hear them,” Zelenskyy continued in his statement. “But the music will break through anyway. We defend our freedom to live, to love, to sound.

“On our land we are fighting against Russia, which brings terrible silence with its bombs – the dead silence. Fill the silence with your music. Fill it out today to tell our story. Tell the truth about this war on your social media, on TV.”

The Grammys are the latest TV special to pay tribute to Ukraine after the Oscars briefly acknowledged the invasion last week. At the Oscars, viewers observed a moment of silence as a message of solidarity materialized on screen.

At the end of the musical tribute to Legend, Grammys viewers were encouraged to #StandUpForUkraine by donating to Global Citizen’s relief effort at ForUkraine.com.

“Support us wherever you can. Any – but not silence,” Zelenskyj said. “Then peace will come to all our cities destroyed by war – Chernihiv, Kharkiv, Volnovakha, Mariupol and others. They are already legends, but I dream of them alive – and free, like you on the Grammy stage.”

Who is Cooper Noriega? Death of a famous TikTok star shocks fans

A ranking of all episodes by weirdness