Rail bosses have urged ministers to return greater powers to private rail companies, including sharing a larger commercial risk, to remedy the financial black hole that has contributed to a wave of strikes.

The government is moving towards an industry re-engineering that would see private companies permanently lose their “risk and return” position on passenger numbers and ticketing revenue, in favor of only set contract fees for operating trains.

But the team of executives tasked with setting up a new state regulator for railroads has drawn up a series of more pro-market reforms, according to documents obtained by the Financial Times.

The proposals include moving to contracts that “restore commercial incentives for operators,” the plans show.

Ministers presented a landmark white paper almost two years ago that proposed rolling back much of the old privatized franchise system and outlined a vision for a central government body called Great British Railways to act as a ‘guide’ for the industry should.

The white paper presented a model that would pay private companies a fee to provide services under mandated management contracts.

This was seen as a natural progression from the emergency contracts that companies had moved to during the coronavirus pandemic, when ridership and revenue plummeted and the government assumed almost all of the financial risk.

The government has still not announced when it will introduce legislation creating Great British Railways, leading many in the industry to wonder if ministers are still enthusiastic about the plans.

The document suggests the industry believes the 2021 reforms have gone too far and that the private sector needs greater freedom while the railroad struggles to maintain its finances.

“We support gradually increasing the level of cost and revenue incentives and risk transfer within service contracts, starting immediately,” it said.

The proposal would see companies given different contracts for different routes, with the state retaining more control over many commuter lines or when major modernization work is undertaken.

However, it is also recommended that many intercity routes, such as the East Coast main line, be returned to a model more similar to the old franchise system, with greater sharing of financial risk and reward between the railroad companies and the government.

The plans do not propose a full return to the old model of companies applying for concessions.

GBR was created to reflect the government’s view that franchising was already on its knees before the pandemic and several franchises had been brought back under state control in previous years.

The position of former Prime Minister Boris Johnson’s government was that competition had largely failed and that the concession model, followed by GBR, had worked in other countries and the London Overground.

With revenue still low due to changing travel habits, parts of Westminster are skeptical about the idea of ​​going back to the old system.

“Bringing back financial risk is not feasible for most franchises right now, if it ever was,” said a senior Tory figure. “Many franchises failed even before the pandemic.”

But the GBR document said the railways could only thrive as a “business enterprise,” as opposed to a fully state-run operation.

The railway faces an annual budget deficit of around £2bn after a sharp drop in commuter numbers. This has contributed to industrial action sweeping the network, with ministers and railway leaders arguing wage increases can only be granted if unions agree to reform their labor practices.

Unions are calling for full nationalization of the railways in state hands and have long criticized the involvement of private railway companies. 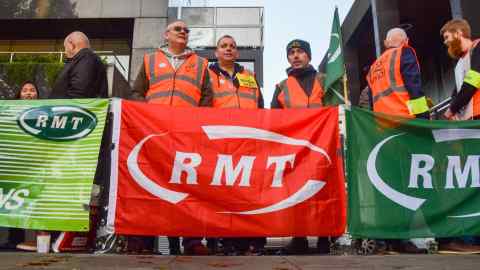 Rail Partners and GBRTT said in statements that ministers had asked the industry for their opinion.

“Any future model must bring in expertise from the private sector, be attractive to the market and ensure that the competition is genuinely beneficial for customers and taxpayers,” GBRTT said.

TinCaps is hiring seasonal part-time positions for the 2023 season

Gold Fields rules out an increasing bid for rival Yamana