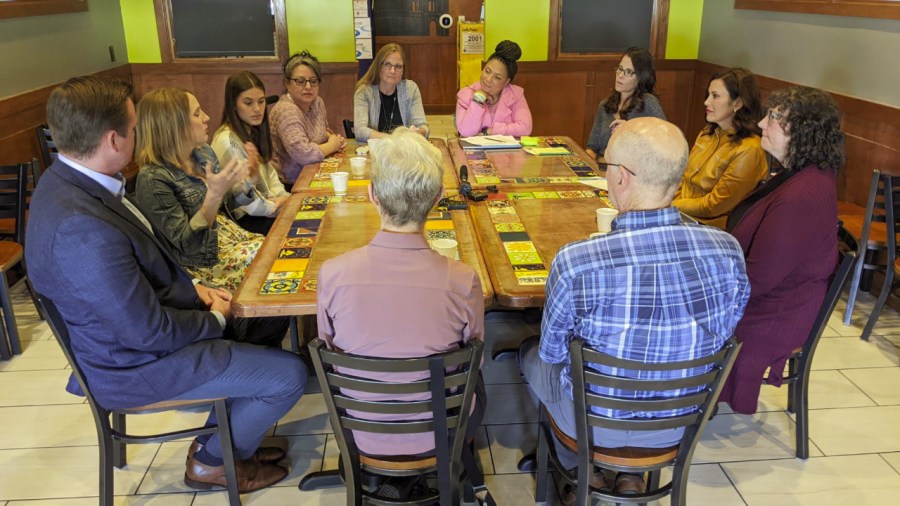 WYOMING, Mich. (WOOD) — A little over a month before the November election, both sides are working on one of the most contentious issues on the ballot — abortion — to get the vote.

Voters will vote on Proposition 3, which if passed, would enshrine reproductive rights, including abortion rights, in the Michigan Constitution.


At a restaurant on Wyoming’s 28th Street, Gov. Gretchen Whitmer, a staunch supporter of abortion rights, attended a roundtable on Proposal 3 Wednesday afternoon.

“Who am I to say that I know best for any of us sitting at this table or for any of the people out there?” said one of the guests invited to the round table.

The arguments were well known, with proponents of Proposition 3 saying that ending access to abortion would set off a chain reaction of health concerns and attacks on women’s rights.

“Abortion care is a part of women’s reproductive care that we’ve had for 49 years and the thought that we might not have access to it is really scary and troubling. And I think that’s why these talks are so important,” Whitmer told News 8.

Michigan has an abortion ban on the books, but it hasn’t been enforced since the landmark Roe v. Wade decision in 1973. Even after the US Supreme Court reversed that judgment this summerthe ban was considered in legal limbo Challenges make their way through the courts.


One roundtable participant spoke about her decision to have an abortion after becoming pregnant in college.

“As a result, she was married, had a couple of children. She says she’s raising her kids in a household where she’s a doctor because she was able to get through her school days,” Whitmer said. “So think about what that would mean for your personal economy, what it would mean for our state economy. With Roe v. Wade, empowered women to participate in the workforce.”

On Tuesday, the debate took center stage on the Hope College campus in Holland.

“We have a lot of work to do and a lot of messages to spread to really explain Proposition 3,” said Grace Brown.

She chairs the Hope College chapter of the anti-abortion rights group Students Cherishing Life and on Tuesday participated in an on-campus discussion titled “The Harmful Effects of Abortion on Women” with author Alexandra DeSanctis.

“We must have something good to say. We need to be able to explain that abortion is wrong because life is good.” DeSanctis told News 8 ahead of the event.

DeSanctis said the anti-abortion rights side’s message must go beyond protecting the life of an unborn child. While abortion rights advocates say a ban would deprive women of their rights, DeSanctis argued that abortion was actually a setback for her.

“I think a lot of people on the other side are very genuine in their fear that women will be disadvantaged,” DeSanctis said. “Abortion is not really a solution to these problems. Telling women that their children stand between them and success or fulfillment or blossoming is a lie. The trust is that our society needs to adapt to become a more women-friendly society. Not giving women this kind of fake solution to kill their own children as some kind of band-aid.”


Proposal 3 will be decided in the general elections on November 8th.