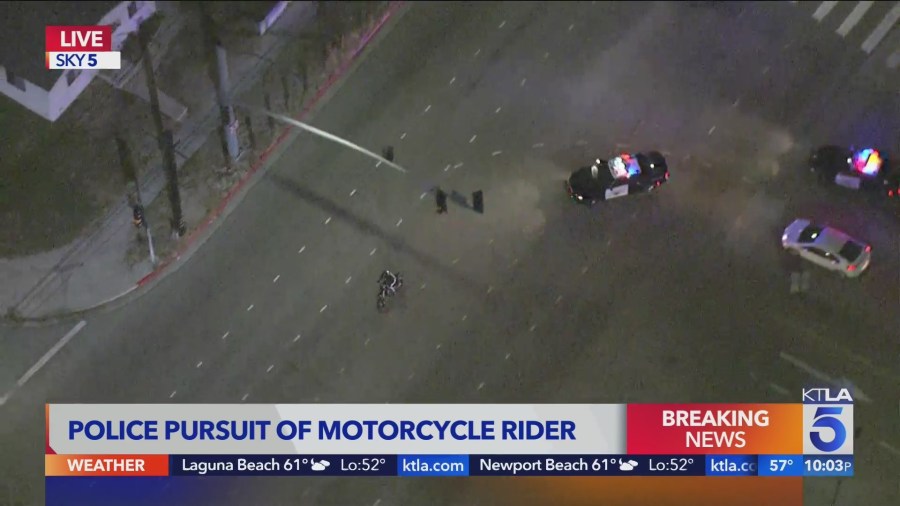 (KTLA) — Police on Friday night pursued a motorcyclist who recklessly traveled the wrong side of the freeway in Los Angeles.

The motorcyclist, whom police initially tried to pull over for running a red light, began traveling at high speed in the wrong direction on the 134 Freeway in Glendale before exiting onto Hollywood Way. Authorities later said they believe the motorcycle or motorbike was stolen.

During the chase, the biker was seen performing stunts such as popping wheelies and standing in the seat while squad cars drove close behind, footage captured by KTLA shows.

Police followed the suspect into the Universal Studios area before a group of other motorcyclists suddenly arrived and surrounded the biker.

The suspect stopped at a gas station to get gas before continuing the journey, eventually pulling into a West Hollywood parking lot and stopping to speak to the garage attendant.

The suspected car thief tries to surrender after being chased, but no one is waiting to arrest him


Several agencies, including Los Angeles County Police Departments and the California Highway Patrol, were believed to have followed the suspect at least at various points in the pursuit before retreating or losing sight of the biker.

The investigations are ongoing. A California Highway Patrol representative was not immediately available to confirm whether the suspect was identified or the motorcyclist arrested.

https://www.wane.com/news/crime/motorcyclist-drives-down-wrong-side-of-la-freeway-pops-wheelies-during-police-pursuit-footage-shows/ Police are pursuing a wrong-way driver in Los Angeles

How a little box saves hearts and lives

"We all love someone who has had an abortion"

Many baby food factories have not been inspected because of COVID