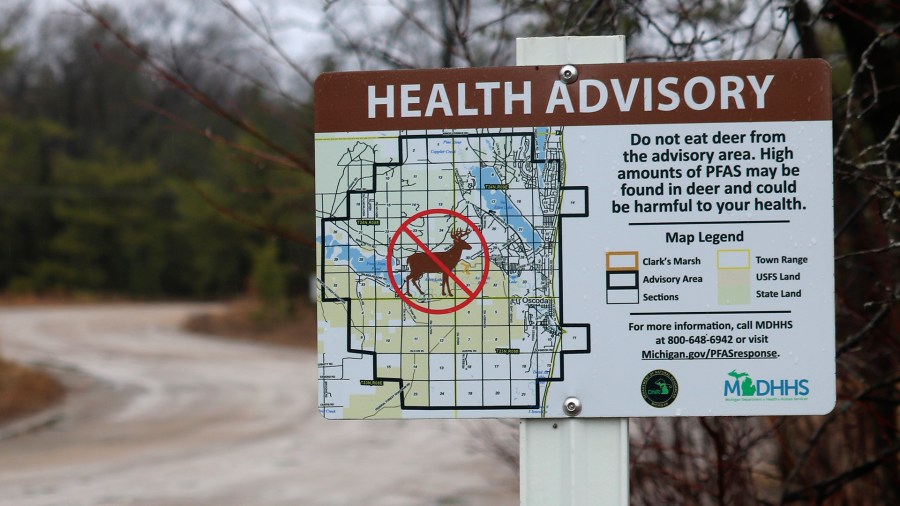 PORTLAND, Maine (AP) — Wildlife authorities across the U.S. are finding elevated levels of a class of toxic chemicals in wildlife like deer — and this is prompting health warnings in some places where hunting and fishing are ways of life and key elements of the economy.

The authorities have noted the high levels of PFAS, or per- and polyfluoroalkyls, in deer in several states, including Michigan and Maine, where legions of hunters capture a buck each fall. Sometimes referred to as “forever chemicals” because of their environmental persistence, PFAS are industrial compounds used in numerous products such as non-stick cookware and clothing.

The US Environmental Protection Agency started an attempt last year to limit pollution from chemicals linked to health problems like cancer and low birth weight.

But the discovery of the chemicals in wildlife hunted for sport and food presents a new challenge that some states have begun to address by issuing “do not eat” advisories for deer and fish and banning testing for PFAS in have expanded them.

“The fact that there is an additional threat to wildlife — the game that people hunt and fish — is a threat to those industries and to how people think about hunting and fishing,” said Jennifer Hill, associate director of The Great Lakes Regional Center for the National Wildlife Federation.

PFAS chemicals are increasingly the focus of health and environmental regulators, in part because they do not break down in the environment, or break down slowly, and can remain in a person’s bloodstream for life.

The chemicals enter the environment through the production of consumer goods and waste. They were also used in fire-fighting foam and in agriculture. Sewage sludge contaminated with PFAS has long been applied to fields as fertilizer and compost.

In Maine, where the chemicals have been found in well water hundreds of times, the legislature established the federal health advisory level In 2021, a law was passed obliging manufacturers to report their use of chemicals and phase them out by 2030. Environmental health advocates have said Maine’s law could be a model for other states, some of which are working on their own PFAS legislation.

California Gov. Gavin Newsom, a Democrat, signed legislation in September banning the chemicals in cosmetics sold in the state. And according to the National Conference of State Legislatures, more than 20 states have proposed or adopted limits for PFAS in drinking water.

Further testing is likely to reveal that the chemicals are present in wildlife other than deer, such as wild turkey and fish, said David Trahan, executive director of the Sportsman’s Alliance of Maine, a hunting and outdoors advocacy group.

Maine was one of the first states to discover PFAS in deer. The state last year issued a “do not eat” notice for deer harvested in the Fairfield area, about 80 miles (129 kilometers) north of Portland, after several of the animals tested positive for elevated levels.

The state is now expanding testing to more animals in a larger area, said Nate Webb, director of the wildlife division at the Maine Department of Freshwater Fisheries and Wildlife. “Laboratory capacity has been a challenge,” he said, “but I suspect more facilities will come online to ease that burden — in Maine and elsewhere in the country.”

Wisconsin has tested deer, ducks and geese for PFAS and, as a result, issued a “do not eat” advisory for deer liver in the Marinette area, about 55 miles (89 kilometers) north of Green Bay. The state also urged fishermen to reduce consumption of Lake Superior’s popular rainbow stink to one meal a month.

Some chemicals, including PFAS, can build up in the liver over time because the organ filters the chemicals from the blood, the Wisconsin Department of Natural Resources told hunters. New Hampshire authorities have also issued a recommendation to avoid eating deer liver.

The state issued its first “do not eat” notice for deer caught in and near Oscoda Township in 2018. Michigan has since issued advice to consume organs such as the liver and kidneys of deer, fish, or other wild animals statewide. It has also surveyed waterfowl statewide in areas with PFAS surface water contamination.

The state’s expanded testing has also proven beneficial in helping authorities identify which areas do not have a PFAS problem, Newcomb said.

“People like to throw up their arms and say there’s nothing we can do about it. I’m happy to point out our findings and say that’s not true,” Newcomb said. “Detecting PFAS as a pollutant of concern was the exception rather than the rule.”

The chemical has also been found in shellfish collected for recreational and commercial purposes. Scientists at the Florida International University Institute of the Environment sampled more than 150 oysters from across the state in August and found them in each PFAS, according to their study. Natalia Soares Quinete, an assistant professor in the institute’s Department of Chemistry and Biochemistry, described the chemicals as a “long-term poison” that poses a threat to human health.

dr Leo Trasande, a professor of pediatrics at NYU Grossman School of Medicine who has studied PFAS, said the best way to avoid adverse health effects is to reduce exposure. But, Trasande said, that’s difficult because the chemicals are so common and persistent in the environment.

“If you see it in humans, you’ll likely see the effects in animals,” he said.

Wildlife protection agencies have attempted to inform hunters of the presence of PFAS in deer with signs in hunting areas, as well as notices on social media and the internet. One such sign in Michigan told hunters that high levels of PFAS “can be found in deer and could be harmful to your health.”

Kip Adams, chief conservation officer for the National Deer Association, said the discovery of PFAS in states like Maine and Michigan is of great concern to hunters.

“With the amount of venison my family eats, I can’t imagine not being able to,” Adams said. “So far we’ve done everything we can to share information and make sure people are aware.”

The Associated Press’s climate and environmental reporting is supported by several private foundations. Learn more about AP’s climate initiative here. The AP is solely responsible for all content.

The UK pension fund crisis should be a cautionary tale

End of Fed rate hikes? "If the data shows what we need to see, then we'll downshift" - Orange County Register