Two years after CEO Andy Bird’s leadership, the pledge to transform a company best known for college courseware into a digital-first learning company is underway.

“We don’t buy CDs anymore, we listen to Spotify. We don’t buy DVDs anymore, we watch Netflix,” the former Disney exec said in an update for investors six months into his tenure. “The way we learn is also changing, driven by technology and new consumer habits.”

After a convoluted strategy before its arrival and seven profit warnings in as many years, many investors believe the company has reached a turning point. Underlying sales rose 6 per cent to £1.8 billion in the first half of the year and Pearson is the best-performing stock on the FTSE 100: up 59 per cent.

Their optimism stems from Bird’s efforts to transform an established education company into a high-growth, high-margin digital disruptor that delivers learning from school to college to the workplace.

“We’re just trying to place the various building blocks right now,” Bird said in a recent interview with the Financial Times. “It’s pretty much the beginning of our journey. . . of what could be explosive growth.”

So far, investors have been on board – albeit with less breathless enthusiasm than the CEO. Cevian, the activist 10 per cent shareholder, touted Pearson’s “high-value assets” such as its textbook business and wide customer reach, while hailing plans to cut costs by £100m in 2023. Partner Martin Oliw said the company has a “compelling vision” and a strong foundation for profitable growth.

A first step toward that growth is a subscription service, Pearson Plus. Launched by Bird last year, it gives users online access to all of Pearson’s textbooks for $14.99 a month — an offer the company says will position it as Spotify or Netflix, but for education.

Roger Wilkinson, head of equity research at Columbia Threadneedle, one of Pearson’s top 10 shareholders, welcomed the move. He said Bird is “looking to the future” and realizing “there has been a change in the way people engage in learning and training.”

At last count, the product had 4.5 million users, of which 329,000 were new paying subscribers and the rest were existing Pearson users who were automatically subscribed.

The relatively low number of new registrations does not seem to worry investors. Ian Lance, fund manager at top 10 Pearson investor Redwheel, compared it to Microsoft’s move from a one-time purchase to a recurring revenue model. “It becomes a much more reliable, consistent stream of income,” he said.

Margins on that revenue can also skyrocket because—unlike Spotify or Netflix, which must constantly buy or create new music or entertainment—educational textbooks change little from year to year, reducing the need to acquire new content, is reduced.

“It’s just the students who come through the assembly line who learn the same things every year,” Wilkinson said. “Pearson already owns this content; They’re basically just expanding the audience.”

The renaming comes after a few turbulent decades. Pearson began life as a construction company in the late 18th century and then built an interest in the media by purchasing publishing, broadcasting and news organizations. It wasn’t until 2015, after acquiring learning companies like Edexcel, Harcourt, and Connections, that it largely shifted its focus to education.

For the past decade, Pearson’s central higher education division has bled sales to the used market. Declining enrollments at US universities dampened growth. Plagued by profit warnings, Pearson’s sprawling jigsaw puzzle of education companies looked sluggish and stuck in the past.

But Bird insists the businesses he inherited will set the company apart. “I looked under the hood and said, wow, there are some really interesting assets in this company,” he said. “Back then we had 90 percent of the puzzle pieces, we just had to make a new picture.”

These assets include the content of textbooks, which can be reused in more lucrative formats such as online learning. Vocational BTec qualifications, VUE assessment centers for sedentary professional qualifications and English language learning products are also growing.

Pearson has acquired Faethm, a technology company that assesses the skill needs of companies, and Credly, a workplace training accreditation platform. 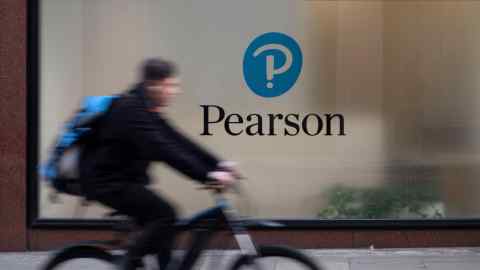 Bird’s hopes to consolidate these into a coherent offer for employers to reskill their workforce. Meanwhile, Pearson Plus customers’ subscription basis can lead to lifetime qualifications, training and accreditations.

“We go from diagnosis to learning to assessment and then certification. . . We’re the only company that does that,” Bird said.

With the share price now well above his bid of 870p, Pearson seems justified in rejecting a £7billion takeover attempt by private equity group Apollo in March.

Redwheel’s Lance calculated that the share price could reach £12 if the company meets its five-year targets. “It has the potential to be a really good deal,” he said.

After almost 10 years, however, some investors are more cautious.

Higher education accounts for at least a fifth of sales, but demand in this sector is shrinking due to declining birth rates and university exodus. While the pace has slowed this year, college enrollments have fallen 4.2 percent since 2020, limiting Pearson’s market.

And while Bird’s focus on workplace training is aimed at shielding against those headwinds, some are skeptical that his offering lives up to the rhetoric.

Berenberg said the group’s “college-centric slant” would slow growth, and described the workforce skills unit as “minor” and required significant acquisitions to compete with other companies in a crowded space.

One of those rivals is Cengage, which is also pursuing an all-you-can-eat subscription for college students and has jumped into corporate training, including targeted acquisitions.

Investors don’t need to be reminded that we’re just getting started. “Now it needs to make that vision more tangible and show progress in its implementation,” said Oliw von Cevian.

Nonetheless, after years of wandering around, Pearson might finally find his way.

Martin Lewis is right: the livelihood emergency is already here

Hungary’s MOL prepares to turn away from Russian oil