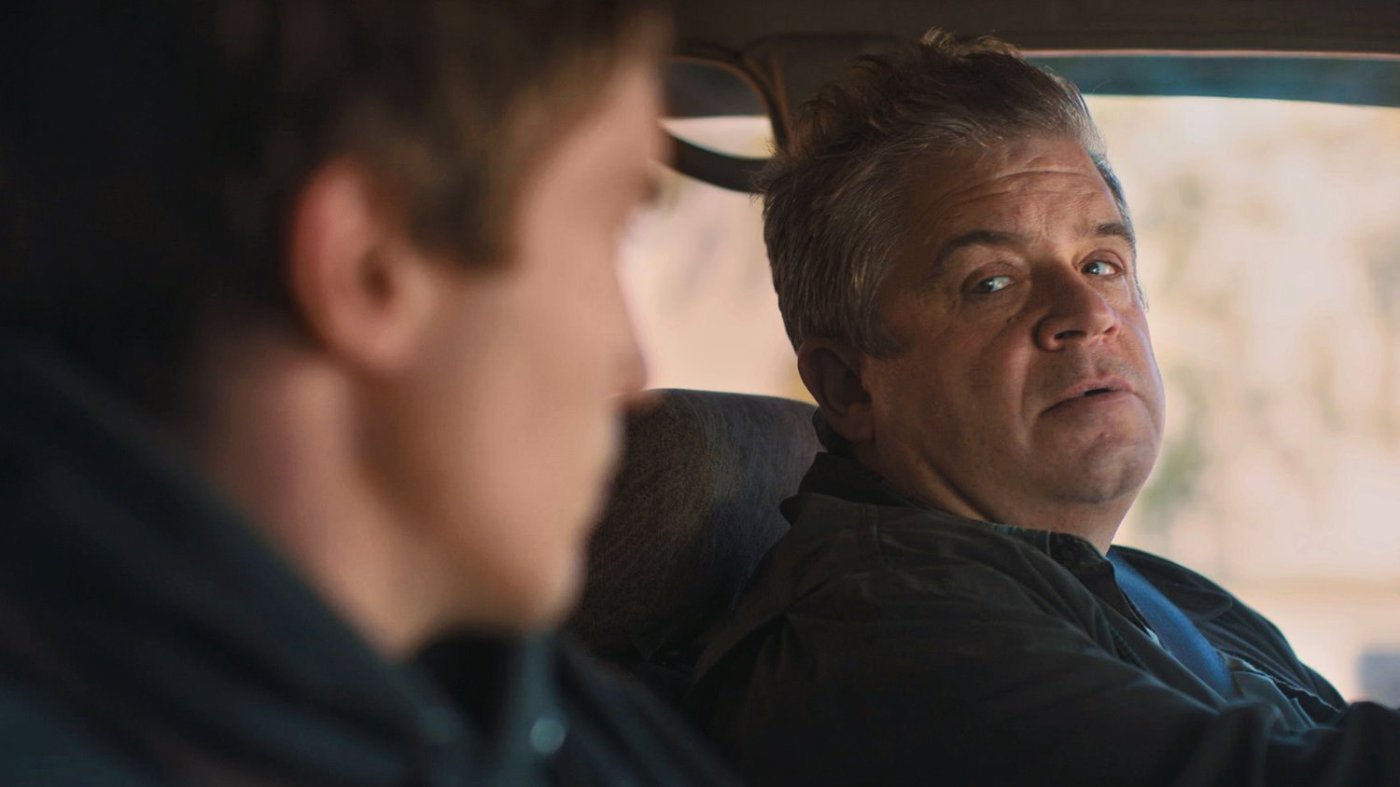 Chuck is a terrible father. He’s either absent-minded or screwing things up, or, more commonly, both… while remaining almost willfully blind to the harm he’s doing to his son, Franklin.

So Franklin, struggling with depression and trying to hit the reset button on his life, shuts down his dad and blocks him on all social media. Briefly distraught, Chuck then decides to fish for his own son by posing as a beautiful, smart, and compassionate young woman who suddenly becomes interested in Franklin.

Of course, that’s a terrible idea. This starting point for director and star James Morosoni’s I Love My Dad is actually based on a real-life situation in which Morosoni was confronted with his own father. But in this comedy, Chuck goes much further, wreaking all sorts of havoc with his insane plan and generating “amazing laughs,” says comedian Patton Oswalt, who plays Chuck.

Oswalt has done nine comedy specials and film and TV credits from King of Queens to Ratatouille to BoJack Horseman. But lately he’s broadened his spectrum, and while he brings wit and absurdity to the funny moments – he also shares scenes with Rachel Dratch and Lil Rel Howery – he also grounds the more poignant and dramatic moments with honesty and vulnerability.

He recently spoke about his recent roles via video and found common ground with Chuck and his stand-up. This interview has been edited for length and clarity.

Q. When you read a script like this, with sharp tonal shifts and some chilling comedy moments, do you worry that while it’s good, it might also be a total disaster?

That’s what attracted me to it. I love reading scripts that work or fail – not just fail, forget that. But a fiasco creates its own gravity and then memories. A movie like 27 Dresses isn’t talked about much, but Battlefield Earth has written memoirs and monographs about it because people are still like, ‘What was going on on the damn set?’ The audience looks together and says, ‘ Wow, are we all seeing that?”

Q. Aside from a potentially epic failure, what really appealed to you about the script?

Chuck thought, “Don’t I get credit for wanting to do good?” And I’ve been guilty of that many times. Chuck doesn’t understand that you really have to pull through and do good. He doesn’t do the damn work. He’s also gotten into a rut where he thinks, “I can come up with a spectacular excuse after the fact, so I’m already giving myself permission to screw this up.” It was interesting to find that guy’s energy — how do you get out of bed every morning if this is your life?

Q. How did you find your way into these guys?

There have been moments when I’ve done things, not on that level of course, but sometimes it takes self-deception to exist. But as a parent, I’ve thought about if you really screwed things up with your child—which would be a nightmare for me—what emotional journey you would go on. And Chuck doesn’t have the tools to deal with that, so there’s something quixotic about that need and that goal. That was really fun to play.

Q. You often act in isolation, with your phone or laptop. Was that challenging?

It’s part of this guy’s MO that he dabbles in deception and fantasy, so he gets into the rhythm of it. And I’m not saying I’ve reached that level, but there have been amazing scenes in movies where people interact with machines or screens – I immediately think of Robert Redford on the phone in All the Presidents Men. There’s an incredible scene in the beginning of The Vast of Night where the operator is working on the phones and scenes in Margin Call where they’re looking at screens, but it’s such amazing acting when you realize that the numbers spelled out on the screen are the end of the world for them. One of my favorites is Clint Howard in Apollo 13 when he looks at the screen and realizes something is really wrong.

Q. It’s a fun movie, but you also have serious scenes exploring your character’s many weaknesses. You recently played Richard Nixon’s adviser, Chuck Colson, on Gaslit. Are you looking for these more complex human characters?

I’m always looking for people who aren’t always so funny. Nothing is more fun than delusions and self-doubt. Chuck Colson is an odd match for Chuck from “I Love My Dad”. He was 100 percent a true believer and 100 percent incompetent.

He’s one of those people who thinks, “I win because I’m good,” but he wasn’t smart or good. He just told himself he’s good. You see so much of that today in normal, everyday people doing something horrible or racist or homophobic on TikTok itself, but thinking, “It’s okay if I say that.” How do you exist in this world? That fascinates me.

Having done comedy for years, I can plan dates and times ahead and know what’s coming. But I also have a great wife [actress Meredith Salenger] who’s in the business and knows when to say, “You don’t have to do anything tomorrow so that your work will be good later.” Knowing that I have someone who can bring me down to earth when I’m a little off is unbelievable.

Q. How has your standup evolved over the years?

Whether it’s better isn’t up to me, it’s up to the viewers. I can say that I feel even more comfortable on stage and am more efficient in my storytelling. And I think I’ve gotten really good at finding my voice and speaking about where my life is right now. I enjoy the contradictions when I look back at old specials where I said, “I’ll never get married,” and then, “I’ll never have a kid.” They’re brilliant tracks, but the stuff changes and the people so follow me That was me then.

Q. Your last tour was called “Who’s Ready to Laugh?” How has Standup changed since the pandemic?

Standing up in front of a live audience is such a feeling of relief and joy. Everyone is so happy to be there. They forget the pleasure of walking with people or just being with people. I love just walking into a coffee shop and sitting there listening to the noise of life around you. You forget how valuable that is.

Amazon is buying vacuum cleaner maker iRobot for around $1.7 billion

The power of a good question