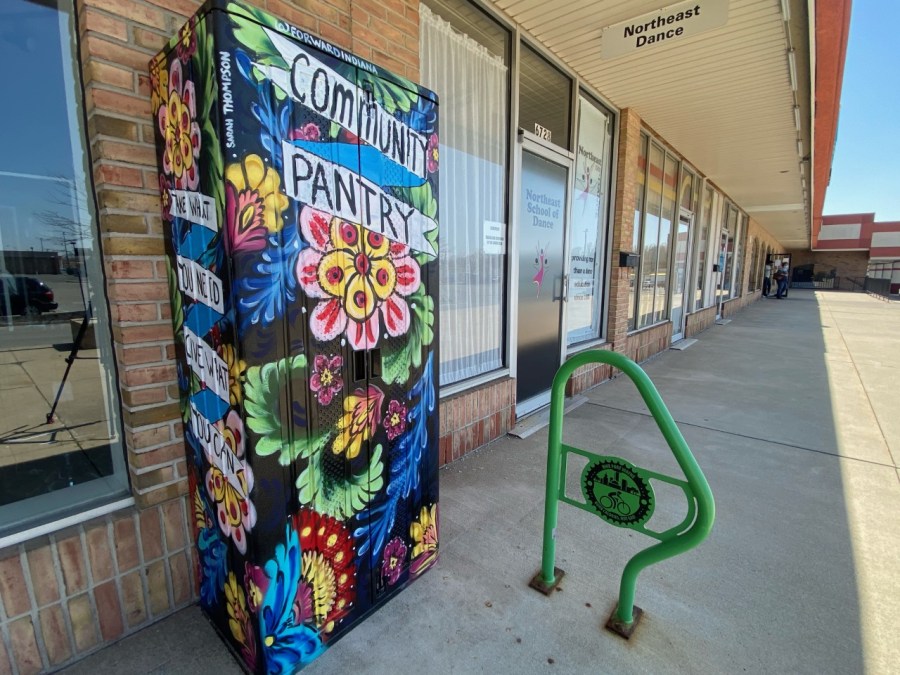 If you have extra non-perishable groceries, you can drop them off at a pantry. If you need, you can take food from it.

With 31 pantries in Fort Wayne, you’ve probably seen one of these colorful boxes. For those outside of the area, they soon expand into Gary.


“A coalition of churches and parishioners in Gary saw what we were doing here in Fort Wayne and they came forward,” said Carlos Marcano of Forward Indiana, who considers himself the custodian of the boxes.

A total of 10 pantries will be sent out the first weekend in December, but until then they will be on display at the Firefly Coffeehouse.

They were painted by a group of muralists and community volunteers, each with their own unique flair.


Forward Indiana’s Sarah Thompson believes that the visual aspect of the boxes brings the community together, making them more than just boxes containing just food.

One of these artists is Keileigh Dantzer. The box she designed is a playoff of Froot Loops. Although many will remember the granola as a quick and sweet breakfast, their inspiration for the box is a little different.

“When my sister and I were young, every time my dad had to disappoint us, he would say, ‘I’m sorry to pee on your fruit ribbons,’ instead of raining on your parade,” Dantzer said.

Pantries and banks are starving and looking for donations


Whatever the story behind each box, Forward Indiana looks forward to deploying pantries that are both aesthetically pleasing and practically functional.

“We’re thrilled and honored that the people of Gary have been inspired by us, just as we’ve been inspired by other mutual aid coalitions that have come before us, but it’s definitely bittersweet because it means it’s obvious There are people in Gary who are also struggling with food insecurity,” Thompson said.

You can donate to Forward Indiana by using their Action Network page.

Voters come to vote in the Georgia Senate runoff on Saturday

Jobe will debut with Whitecaps next week