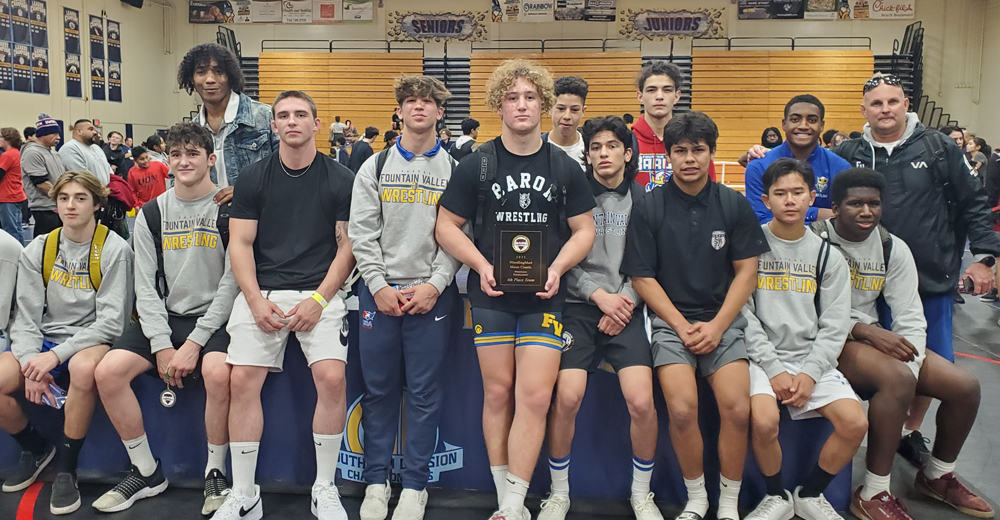 1. Brunnental: Barons was third at the Five Counties Invitational, second at the Mann Classic. They are #3 in the combined CIF Southern Section Divisions 1 and 2 rankings and #9 in the CalGrappler.com state rankings.

2. Calvary Chapel: Eagles finished fourth in the Mann Classic, are #7 in CIF-SS Divisions 1 and 2 rankings, and #14 in the states rankings.

3. Trabuco Hill: Mustangs, #1 in the CIF-SS Division 3 top 10, finished sixth at the Tournament of Champions in Sonora, seventh at the Mann Classic and tenth at Five Counties.

4. Corona del Mar: Sea Kings, ranked 33rd in the state, placed third in the Mann Classic and 10th in the Tournament of Champions.

5. Cypress: Centurions are No. 6 in the CIF-SS Division 4 top 10 and placed fifth at the Cossarek Classic at Westminster.

6. Aliso Niguel: Wolverines are ranked No. 8 in the CIF-SS Division 3 rankings and have defeated San Clemente in a league game.

7. West: The #1 team in the CIF-SS Division 5 Top 10 finished sixth at the Cossarek Classic.

9. San Clemens: Tritons finished 15th in the Tournament of Champions, is No. 36 nationally.

10. Service: The brothers finished fourth in the Cossarek Classic, ninth in the Mann Classic.

UK car production falls to its lowest level since the 1950s

Has The Heat discovered another hidden gem of summer? – Orange County Registry