The 2022 World Cup featured 136 players representing nations other than where they were born, with international football increasingly reflecting the dispersed populations that exist around the world.

Morocco, who unexpectedly reached the semi-finals in Qatar, had the most foreign-born players in their squad at 14.

In the past, major footballing nations may have seen less need to broaden their horizons when looking for players, while other countries might be wary of players only exercising their eligibility because they were not chosen by their country of birth.

Poland fits into the latter category as it has traditionally chosen its players from a pool of Polish-born citizens. Times are changing, however, and the introduction of Aston Villa’s Berkshire-born Matty Cash in 2021 likely won’t be the last example of them looking further afield.

This is because they have expanded their UK scouting team and hired two new scouts in Scotland.

So the question arises, what does a national team scout do abroad all day? 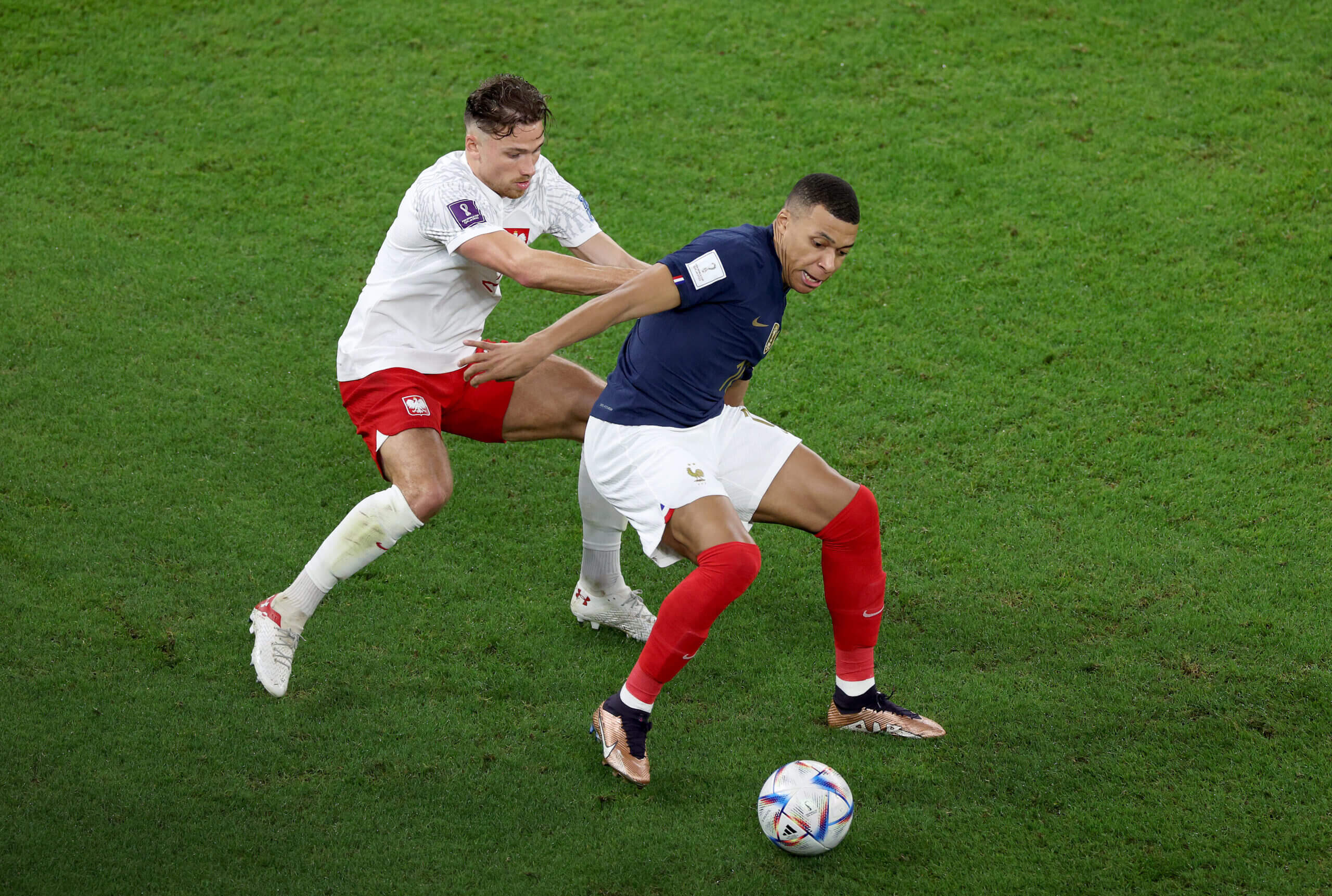 Jakub Szewczyk, 20, one of the hired scouts (the other was Antoni Masny), moved to Scotland from Poland in 2006 and speaks eight languages, but even he was a little surprised when he received a LinkedIn message from a man he worked for worked the Polish Football Association and had been informed of the scouting work Szewczyk published online.

“My conversation came out of the blue and I wasn’t sure what it would mean at first, but it’s only when you look at the number of Poles living in Scotland that you realize how great the opportunity is,” says Szewczyk.

A 2021 report by the National Records of Scotland estimates that this is the case 62,000 Poles living in Scotland, making them the largest population of non-British nationals in the country.

“The FA have quite a localized scouting system in Poland and in Germany, so I’ve been talking to clubs and coaches over the past few weeks and there are some promising players in the academies,” he says.

“I’m in the process of building a database and we’re starting to explore it this month. We’re probably talking about 20 to 30 kids in the academies from the conversations I’ve had so far.

“There was the high-profile story of Matty Cash choosing Poland and he’s the first player I remember who wasn’t born in Poland to represent the national team. For a long time you had to be born in the country and have a Polish passport, but if there are players in Germany or Great Britain who are good enough to play for us, then we will call them up early.

“Poland has about 40 million inhabitants, but the diaspora is huge and it exists 20 million even outside the borders. It’s a demographic that has historically been underutilized, so I’m delighted to be able to help the national team find these talents.”

Jakub Szewczyk, 20, moved to Scotland from Poland in 2006

Szewczyk grew up in the Fife town of Kirkcaldy after his mother Justyna was poached by Lloyds Pharmacy and is a fourth year Spanish and French translation student at Heriot-Watt University in Edinburgh.

The 20-year-old knows what it’s like to have a sense of dual nationality, having lived most of his life in Scotland after his family relocated from Boleslawiec in eastern Poland, an area recently taken over in a large number of Ukrainians fleeing the Russian invasion.

Admittedly, his footballing skills leave a lot to be desired but if he were in the shoes of these lads he would feel compelled to play for Poland rather than Scotland, although he feels connected to the latter.

“It’s a very personal decision for people. If I’m at a game and there’s a talented player tearing it up, I’ll try to speak to him and his parents to see if he would consider playing for Poland.

“But if he says he feels Scottish because he grew up here then there will be no coercion on my part. They have to play for the country they think they come from, otherwise it’s pointless,” he says.

Despite the size of the Polish community, there is not such a rich history of Polish players in Scotland. The first contingent consisted of members of the Polish army team who played in the Northeast after the end of World War II.

In 1971, Hamilton’s Cold War-era Polish chairman Jan Stepek brought in three internationals (Alfred Olek, Witold Szygula and Roman Strazalkowski) – all of whom had played against Brazil at the time of Pele, Garrincha and Jairzinho – and offered to wash the ship’s machines and electronics from his company in exchange for the players.

Dariusz Wdowczyk made almost 200 appearances for Celtic in the late 1980s and early 1990s, Dariusz Adamczuk signed for Dundee and Rangers in the 1990s and Maciej Zurawski and Artur Boruc both enjoyed good success at Celtic after joining Celtic in 2005. Dundee United had three Polish goalkeepers including Lukasz Zaluska and Livingston who continued the tradition of Polish goalscorers with Max Stryjek being their No 1 for two years before joining Wycombe Wanderers in the summer.

It really is. And all these players were imported as established professionals. Examples of players of Polish descent who grew up in Scotland and made it into professional football are few and far between.

Kevin Rutkiewicz, whose grandfather emigrated to Scotland during the Second World War, played for St Johnstone and a number of other Scottish clubs before moving into management, with the 42-year-old currently managing East Kilbride FC.

Currently the only Polish player in the SPFL Hibernians is backup goalkeeper Kevin Dabrowski.

Are there deeper reasons for the lack of a Polish representation? Has it failed to help young Poles assimilate into Scottish football culture?

“I don’t think the cultures are too different,” he says.

“But most people who have migrated to Scotland from Poland did so so their children could have a better life. According to some Polish adults, they improve their lives by studying hard, going to university and finding a good job that allows them to earn money.

“It’s quite risk free, quite normal and the universities are more prestigious than any other in Poland, so they have that stability. Football may not seem like a stable career option to them, but I don’t know the answer, it’s just a theory.

“Perhaps there is a lack of role models. It would be great for a Polish kid to break through at an SPFL academy (for youngsters to watch) the way Scottish kids see Andy Robertson, Kieran Tierney and Calvin Ramsay.

“Robert Lewandowski is the new benchmark and probably should have won the Ballon d’Or in 2020 (the award was not presented due to COVID) but if a player does well then a lot could change.

“I’m not sure there’s much I can do personally, but if I see a player playing below their level, I can talk to some elite academies and see if I can get them into the better academies.”

This is Jakub’s first step into the football industry. His initial goal was to use his exceptional language skills and embark on the path of international relations and diplomacy – he is fluent in Polish, English, Spanish, French and German, as well as some Russian, Portuguese and Italian – but football has always been his passion.

He decided in early 2020, during lockdown, that he would focus on making it in football, starting with a dissertation on the impact of language on football recruitment.

“If a player doesn’t speak the language, it has an additional cost and may take additional time to adapt. I find that my language skills have been very helpful in gaining people’s trust and networking as there are many transferable skills that come with it and I could work in most countries.”

Jakub has ambitions to work in South America or elsewhere in Europe and one day become a sporting director. That’s his dream, but his immediate task is to be Poland’s inner man in the battle between national teams, lest he be caught unawares by the next big talent or, worse, be late to the party.

https://theathletic.com/4023641/2023/01/05/poland-national-team-scout-scotland/ Meet the scout who is in Scotland trying to recruit young players for the Polish national team

How serious is the threat of new Covid-19 variants?

High Schools: Rayshon Luke is slowly turning it up

Lonzo Ball’s recovery is “not proceeding at the pace that we would like,” said Artūras Karnišovas, vice president of the Chicago Bulls – Orange County Register