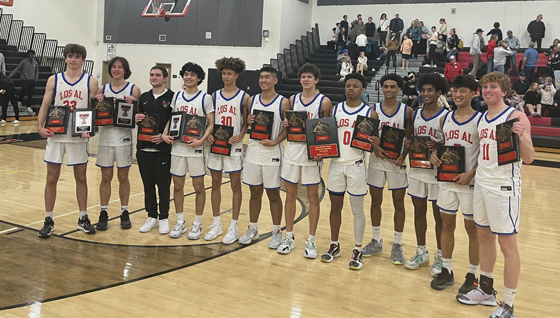 Notable this week: Trinity League teams have four of the top five spots in this week’s top 25 rankings. … Orange Lutheran moved up to 5th place this week after their strong performance in The Classic at Damien tournament. … Trinity League play begins this week, and the schedule includes No. 1 Mater Dei at No. 3 JSerra on Wednesday and No. 3 JSerra at No. 2 Santa Margarita on Friday. … Los Alamitos, who won last week’s Tustin Classic tournament, move up to 9th in the rankings.

1. Mater Dei 12-2: The Monarchs won the In-N-Out division championship at the Desert Holiday Classic in the Palm Springs area. Among their four wins was a 64-54 triumph over the previously undefeated Mira Costa. Mater Dei senior Zack Davidson was named the division’s MVP.

2. Santa Margarita 15-3: The Eagles went 2-2 into The Classic in Damien’s Platinum Division, the tournament’s top division. They lost their first two games before beating Narbonne and Dublin.

4. Fairmont Prep 12-3: The Huskies were 1-2 in the SB Live division of the Desert Holiday Classic, among the top divisions in the tournament. Their fourth game was abandoned by the opposing team.

5. Orange Lutherans 10-4: The Lancers forged a 3-1 record in Damien in The Classic’s Silver Division. The Silver was the fourth-best division of the seven divisions at the tournament, which is one of the top annual tournaments in California.

6. Canyon 14-4: The Comanches, who may not be as strong as preseason predictions suggested due to the injuries to starters Jaden and Josh Goodall, were trailing 3-1 in The Classic in Damien’s top division, the Platinum Division.

7. Pacifica Christian 11-7: The Tritons were trailing 2-2 in the Gold Division, the second-best division of The Classic at Damien, and lost in the division’s consolation game.

8. Foothills 16-1: The Knights won the Senator Division Championship at the Holiday Classic in Torrey Pines. Foothills Travis Paleo was named the Division’s Most Valuable Player.

9. Los Alamitos 13-4: A wild comeback in the fourth quarter saw the Griffins defeat Tesoro in the championship game of the Tustin Classic tournament. Los Alamitos sophomore Chad Minter was the MVP of the tournament.

10. Tesoro 15-3: The Titans lost the Tustin Classic finals to Los Alamitos 44-40 after tournament victories over Westmont, Woodbridge and Tustin.