French President Emmanuel Macron said he supports a ban on imports of Russian oil and coal as part of a new round of sanctions against Russia over evidence its military forces have been committing war crimes on the outskirts of Kyiv.

Macron joined a chorus of Western condemnation Monday after reports of atrocities and mass graves surfaced over the weekend bucha, a town about 25 km northwest of Kyiv, and other areas that until recently were under Russian occupation.

“There is very strong evidence of war crimes,” the French President said in an interview with Radio France Inter on Monday. “What happened in Bucha requires a new round of sanctions and very clear measures, so we will coordinate with our European partners, especially Germany.”

He added: “I think that on oil and coal we need to be able to move forward. We should definitely press ahead with sanctions. . . We cannot accept that.” He did not call for an import ban on Russian gas, which remains an important energy source for Germany, Italy and some Eastern European countries.

Josep Borrell, the EU’s high representative for foreign affairs, said the bloc would hold Russia and its government accountable for “war crimes” in Ukraine and would work “urgently” on new sanctions against Moscow.

“Haunting images of scores of civilian deaths and casualties and the destruction of civilian infrastructure show the true colors of the brutal war of aggression that Russia is waging against Ukraine and its people,” Borrell said. “The massacres in the city of Bucha and other Ukrainian cities are included in the list of atrocities committed on European soil.”

The EU ambassadors will discuss a new sanctions package on Wednesday. The bloc, whose rotating presidency is currently held by Macron, has so far held back with an import ban on Russian natural gas, oil and coal, on which some of its members are heavily dependent.

Russia exports around 8 million barrels of crude oil, condensates and refined products around the world every day, of which 4.5 million b/d go to Europe. About 1 million b/d goes via the Druzhba pipeline mainly to inland refineries in Eastern Europe.

Russia is also a major supplier of thermal coal to the EU, accounting for 70 percent, or 36 million tonnes, of the bloc’s imports last year, according to Eurostat.

Some EU countries have announced plans to drastically reduce their use of Russian raw materials in the coming months and years. But Berlin has resisted an immediate import ban because there are not enough alternative sources of supply available in the short term.

Lars Klingbeil, leader of Germany’s ruling Social Democrats, said: “An immediate gas embargo [is] the wrong way for many reasons”.

“Every day we turn off the gas tap a little more,” he added. But in order to stop gas deliveries overnight, “we have to talk about the consequences that would have for us in Germany”.

Economy Minister Robert Habeck said Germany had made good progress in reducing its dependence on Russian gas over the past four weeks. 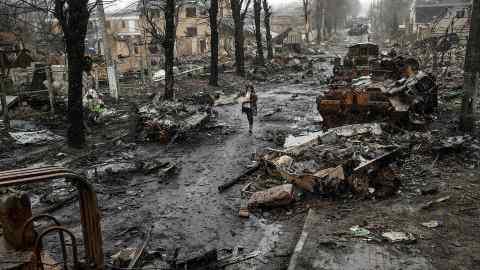 Ukrainian President Volodymyr Zelenskyy said in a video address late Sunday: “It is time to do everything possible to make the war crimes committed by the Russian military the last manifestation of such an evil on earth.”

Russia “categorically rejects all allegations” that its armed forces killed masses of civilians in Bucha, the Kremlin said on Monday.

Dmitry Peskov, spokesman for President Vladimir Putin, expressed “serious doubts” about reports of mass graves with hundreds of murdered civilians in Bucha. “From what we have seen, most of the video footage cannot be trusted because Department of Defense specialists have found signs of video tampering and some forgeries or otherwise,” Peskov told reporters, according to Interfax.

The Russian Defense Ministry previously claimed that no civilians were harmed during the occupation of Bucha.

China, which has refused to condemn Russia’s invasion of Ukraine, offered one muffled answer On Monday. State media did not mention the alleged killings, and posts by prominent bloggers on Chinese social media questioned the accuracy of the reports.

Zelensky promised that the State Department, Attorney General’s office and other branches of government would form a “mechanism of justice” to help bring to justice “those who were unleashed or in any way involved.” . . Crimes against our people”.

Zelenskyy also criticized former Western leaders for being slow to respond to Vladimir Putin’s aggression and for making too many concessions to the Russian president for more than a decade. “Further conclusions are needed. Not only about Russia, but also about the political behavior that actually made it possible for this evil to come to our country,” he said.

Separately, the Ukrainian army said it had regained more territory from Russian forces, retaking a village near Chernihiv, some 150 km northeast of the capital, and Pripyat outside the Chernobyl nuclear reactor, some 150 km northwest of Kyiv.

However, the military warned that Russia would continue to attack critical infrastructure, particularly in the besieged port city of Mariupol and in Odessa, which was attacked over the weekend.

Viruses that could save millions of lives

TikTok and the human face of war