Liz Truss will try to rally Conservative MPs behind their faltering leadership on Wednesday at a party convention mired in bitterness, cabinet fighting and confusion.

Truss, who has been Prime Minister for less than a month, will give a short 30-minute speech urging her party to unite behind its tax-cutting economic policies that have spooked markets and sent Tory polls into freefall.

“We can have no more drift and delays at this crucial time,” she will tell party members in Birmingham, insisting her debt-financed tax cuts would help Britain “break out of this high-tax, low-growth cycle”.

Truss may have hoped the conference would be a culmination following her election as Tory leader on 5 September; Instead, after days of political chaos, she is struggling to get a grip on her party.

The Prime Minister was forced on Monday to scrap a plan by rebellious Tory MPs to scrap the top 45p tax rate, prompting Home Secretary Suella Braverman to accuse her colleagues of staging “a coup d’état”.

For his part, Kemi Badenoch, Minister for Trade, accused Braverman of using “inflammatory language”; Throughout Tuesday’s day there were signs that party discipline was collapsing.

A new Tory rebellion erupted after Truss refused to commit to an increase in benefits in line with inflation next year and reverse a promise previously made by her predecessor Boris Johnson.

The Prime Minister is aiming for benefits to increase in line with average income growth rather than inflation, saving billions of pounds for the Treasury.

Average earnings growth, including bonuses, between May and July was 5.5 percent, according to the latest official figures, while inflation is almost twice as high at around 10 percent.

In a breach of collective responsibility, Penny Mordaunt, leader of the House of Commons, told Times Radio: “I’ve always been committed to keeping up with inflation – whether it’s in pensions or in our welfare system.” 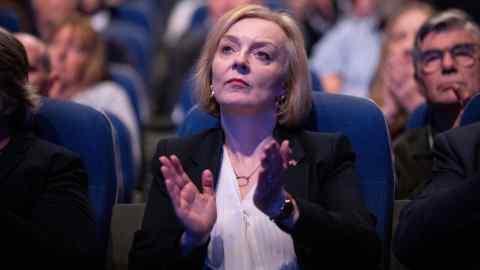 Truss has to fund around £43bn in tax cuts after cutting around £2bn from the original bill following the U-turn in the top tax rate cut. But even right-wing supporters – including former Brexit Secretary Lord David Frost – have urged them not to try to balance the books by cutting the real incomes of Britain’s poor.

Torsten Bell, director of the Resolution Foundation, tweeted: “Two things are pretty clear – the government wants to cut benefits to help fill them [a] big budget hole and they can’t win votes for it.”

There was also confusion over the timing of the release of the government’s haircut plan, which is set out alongside official forecasts, with Chancellor Kwasi Kwarteng saying November 23 was the target date.

But his allies confirmed a report in the Financial Times later that month that he intended to bring him forward. “It will be ready by November 23,” said one. “If we can bring it forward, we will try that.”

Financial insiders said a change in date would first have to be communicated to Parliament, which will not return until October 11.

Kwarteng’s “mini-budget,” which also removed the cap on bankers’ bonuses, appears to have been poorly received in many of the working-class seats won by Johnson’s Conservatives in 2019.

A survey by Redfield & Wilton Strategies in Red Wall seats in northern England and the Midlands gave Labor a 38-point lead over the Conservatives, up from 15 points two weeks ago.

A survey by JLPartnersPolls asked the public what words they associated with the Prime Minister; the most common was “incompetent”, closely followed by “useless” and “unreliable”.

Grant Shapps, former Transport Secretary, said on The News Agents podcast that it was possible the Conservatives could change the leader again if Truss “performs poorly”.