Liz Truss is bracing for a new rebellion over her economic plans as senior Conservative MPs threaten to vote against the UK PM if she decides to make real benefits cuts next spring.

Truss is considering raising benefits in line with average earnings growth rather than inflation, a controversial move that has raised concerns about the impact on the cost of living crisis.

Average earnings growth, including bonuses, between May and July was 5.5 percent, according to the latest figures from the Office for National Statistics, while inflation is almost twice as high at around 10 percent.

The move is part of an attempt by the government to cut public spending to reassure financial markets after sterling and gilt prices fell following last month’s ‘mini’ budget that left £45bn in unfunded included tax cuts.

But Truss, who was already forced into an about-face this week – by dropping her controversial abolition of the top income tax rate of 45p – is now being pressured by some MPs to change course on her benefits plan.

Penny Mordaunt, leader of the House of Commons, became the first cabinet minister to speak out against the policy in an interview on Tuesday morning. Mordaunt said it “makes sense” to increase benefits in line with inflation.

“I’ve always been committed to keeping up with inflation – whether it’s in pensions or in our welfare system. It makes sense to do this. I voted for it beforehand,” Mordaunt told Times Radio.

“We want to make sure people are taken care of and that people can pay their bills. It’s not about helping people with one hand and taking them away with the other.”

Asked about social security benefits, Truss said in a pre-taped interview on Radio 4 Tuesday morning that the government needs to make decisions to reduce the debt-to-GDP ratio. “I’m very committed to supporting those most vulnerable,” she said, noting that the government was making £1,200 in payments to millions of low-income households to help with rising fuel bills.

“But we have to look at these issues collectively, we have to be fiscally responsible, and I’m absolutely committed to doing that,” she said.

Downing Street believes it would not be fair to give beneficiaries a 10 per cent increase when wages in the public and private sectors are growing much more slowly.

However, Truss has pledged to maintain the pension “triple lock,” under which pension payments increase by the highest of inflation, average earnings growth, or 2.5 percent. “When people have fixed incomes like pensions, it’s quite difficult to adjust. I think there’s a different situation for people who are able to work,” she told LBC.

Damian Green, former deputy prime minister, said he and other MPs would not vote for welfare policy in the House of Commons.

“No, I would not approve of that. And no, I don’t think it would get through Parliament,” he told LBC.

“And I think what we’ve learned in the last 24 hours is that the government has gone into listening mode and realized you can’t just get whatever you want. And I hope this lesson will be well learned for the future.”

In England, Scotland and Wales, 5.7 million people receive universal credit, the main benefit payment. The Institute for Fiscal Studies, a think tank, has estimated that it would cost £7bn next year to index UC to inflation rather than revenue 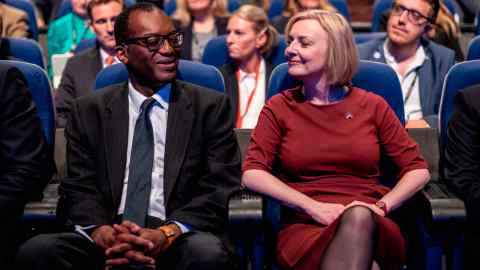 The last benefit increase was just 3.1 percent in April because inflation had been low last September, Stride pointed out.

“So we’re actually coming back from kind of a pretty heavy push on those benefits, so I think that’s going to be a really tough decision,” he said.

Truss said she was right to roll back the 45p tax rate abolition as it “will become a distraction” as it is only a small part of a package that also involves tens of billions of pounds in spending for helping people with energy bills.

UK markets have stabilized following the government’s U-turn on Monday. The pound rose 0.6 percent on Tuesday to its highest level in a fortnight against the dollar, touching $1.14. The 10-year government bond yield, which rises as prices fall, fell 0.09 percentage point to 3.86 percent as traders await more details on funding their budget plans.

Blackhawks return to Milwaukee for first time in 30 years

Semi rolls off I-69; traffic reversed