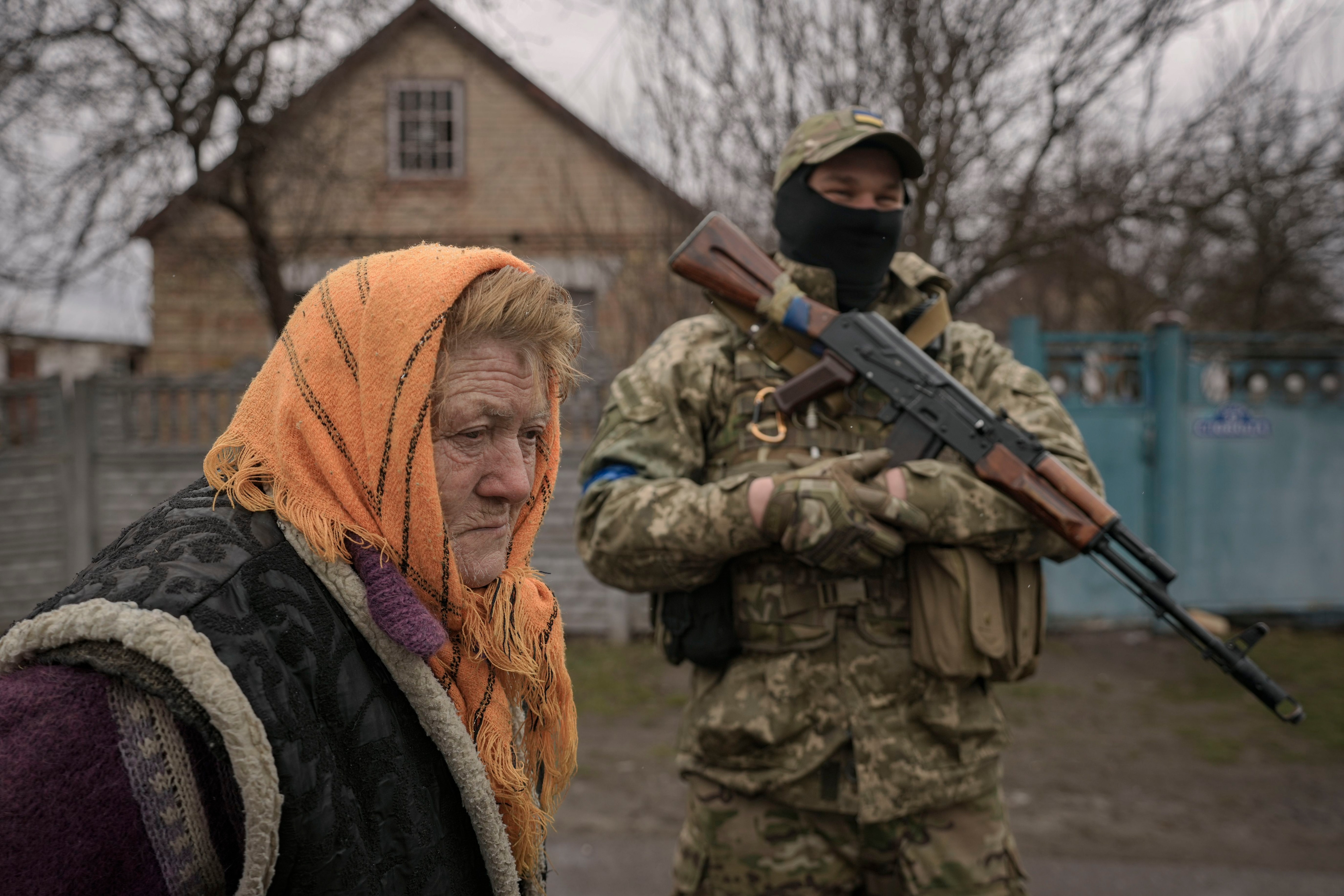 LONDON – Britain’s Defense Ministry says Russia is continuing to build up both its soldiers and mercenaries in eastern Ukraine.

“Russian forces continue to consolidate and reorganize while refocusing their offensive on the Donbass region in eastern Ukraine,” the ministry said in an intelligence update shared on social media on Monday.

It states that Russian troops are being deployed to the area, along with mercenaries from the private military group Wagner.

Overnight, Britain said Russia was still trying to take the southern port city of Mariupol, which has seen weeks of heavy fighting. It said: “The city remains the subject of intense, indiscriminate strikes, but Ukrainian forces are putting up steadfast resistance and maintaining control in key areas.”

The update added that “Mariupol is almost certainly a key target of the Russian invasion as it will secure a land corridor from Russia to the occupied territory of Crimea,” which was annexed in 2014.

KEY DEVELOPMENTS IN THE RUSSIA-UKRAINE WAR:

— “Fill the silence with your music” Zelenskyy tells Grammys

— Ukrainian refugees Finding work, kindness as they settle in

– Go to for more coverage

Zelenskyi said in a speech that “the world has seen many war crimes,” adding that “the time has come to make the war crimes committed by Russian troops the last such evil on earth.” He said a special judicial mechanism would be created to investigate Russian atrocities with the participation of international prosecutors and judges.

According to Ukrainian authorities, after Russian troops withdrew last week, the bodies of at least 410 civilians were found in areas outside the Ukrainian capital – many with their hands tied, gunshot wounds at close range and signs of torture. International leaders have condemned the reported atrocities and called for tougher sanctions against Moscow.

Russia has denied allegations of killing civilians as a “provocation” by Ukrainian authorities and initiated a UN Security Council meeting to discuss the matter.

At least seven people were killed and 34, including three children, injured in a Russian missile attack on Ukraine’s second-largest city, Kharkiv, late Sunday, according to regional prosecutors. It was said that 10 buildings were destroyed.

In the Black Sea port of Mykolayiv, regional governor Vitaliy Kim said at least one resident was killed and 14 others injured by Russian shelling late Sunday. Local authorities also reported further Russian attacks on Mykolaiv early Monday, but there was no immediate news of casualties.

“We are deeply shocked by the revelations of Russia’s extremely cruel actions that have claimed the lives of many Ukrainian citizens,” Matsuno told reporters on Monday. “Attacks on innocent citizens violate international human rights law and are absolutely unforgivable.”

Matsuno pointed out that Tokyo has filed a formal complaint against Russia with the International Criminal Court over its war against Ukraine in March, and that Japan expects the court to fully investigate “war crimes” allegedly committed by Moscow.

Matsuno said Japan will continue to work with the other members of the Group of Seven advanced economies and the international community on possible further sanctions against Russia, but he did not elaborate.

Bodies with their hands tied, gunshot wounds at close range and signs of torture lay scattered in a town on the outskirts of Kyiv after Russian soldiers withdrew from the area. Ukrainian authorities on Sunday accused the withdrawing forces of committing war crimes and leaving behind a “scene from a horror movie”.

“The reports of Ukrainian civilians being killed, raped and seriously injured by Russian troops are beyond reprehensible,” Ardern told reporters in the New Zealand capital, Wellington.

“Russia must answer to the world for what it has done,” she said.

She said her cabinet on Monday will consider other actions New Zealand could take to support Ukraine and send a strong message to Russia. More details would be outlined this week.

“What we are seeing as an international community is certainly evidence of war crimes by Russia,” Ardern said.

“Ultimately it is for the International Criminal Court to make that decision, but the evidence is there and New Zealand is helping prosecutors collect that evidence and ensure Russia is held accountable,” she added.

LAS VEGAS — Ukrainian President Volodymyr Zelenskyy appeared in a video at the Grammy Awards asking for assistance in telling the story of Ukraine’s invasion by Russia.

During the recorded message, which aired on the program Sunday night, he spoke in English and compared the attack to a deadly silence that threatened to wipe out the dreams and lives of the Ukrainian people, including children.

In his words: “Our musicians wear protective vests instead of tuxedos. They sing to the wounded in hospitals, even to those who cannot hear them. But the music will break through anyway.”

The Recording Academy and its partner Global Citizen highlighted a social media campaign called “Stand Up For Ukraine” ahead of the ceremony to raise money and humanitarian support.

Zelenskyy told the audience: “Fill the silence with your music. Fill it out today to tell our story. Tell the truth about the war on your social networks, on TV, support us in any way you can, but don’t be silent. And then peace will come to all our cities.”

Following Zelenskyy’s message, John Legend performed his song “Free” with Ukrainian musicians Siuzanna Iglidan and Mika Newton and poet Lyuba Yakimchuk while images from the war were shown on screens behind them.

Kyiv, Ukraine — Ukraine’s military says its forces have recaptured some towns in the Chernihiv region and humanitarian aid is being delivered.

According to the RBK Ukraina news agency, the road between Chernihiv and the capital Kyiv is due to reopen to traffic later on Monday.

Chernihiv, a town 130 kilometers (80 miles) north of Kyiv, was cut off from food and other relief supplies for weeks. The mayor said Sunday that relentless Russian shelling had destroyed 70% of the city.

Russian forces were also withdrawing from the Sumy region in northeastern Ukraine, local administrator Dmitry Zhivitsky said in a video message relayed by Ukrainian news outlets on Sunday. The troops had occupied the area for almost a month.

In other areas recently retaken by Russian forces, Ukrainian officials said they have recovered hundreds of civilians killed in recent days. The Prosecutor General of Ukraine said the bodies of 410 civilians were recovered in cities in the Kyiv area.

Kyiv, Ukraine – Ukraine’s Attorney General says the bodies of 410 civilians have been removed from towns in the Kyiv area recently retaken by Russian forces.

Iryna Venediktova says on Facebook that the bodies were recovered on Friday, Saturday and Sunday. She says 140 of them have been examined by prosecutors and other specialists.

Deputy Prime Minister of Ukraine Iryna Vereshchuk said the mayor of the village of Motyzhyn in the Kyiv region was assassinated while being held by Russian forces. Vereshchuk adds that 11 mayors and municipal leaders are in Russian captivity across Ukraine.

In a video address on Sunday, Ukrainian President Volodymyr Zelenskyy denounced the alleged targeted killings of civilians in Russian-held cities, calling the killers “freaks who don’t know how to do it any differently”. He warns that more atrocities could be uncovered if Russian forces were driven out of other occupied territories.

International leaders have condemned the reported attacks in cities in the Kyiv region after harrowing accounts of civilians and vivid images of bodies with their hands tied behind their backs.

The Russian Defense Ministry has denied allegations of atrocities against civilians in Bucha and other Kyiv suburbs.