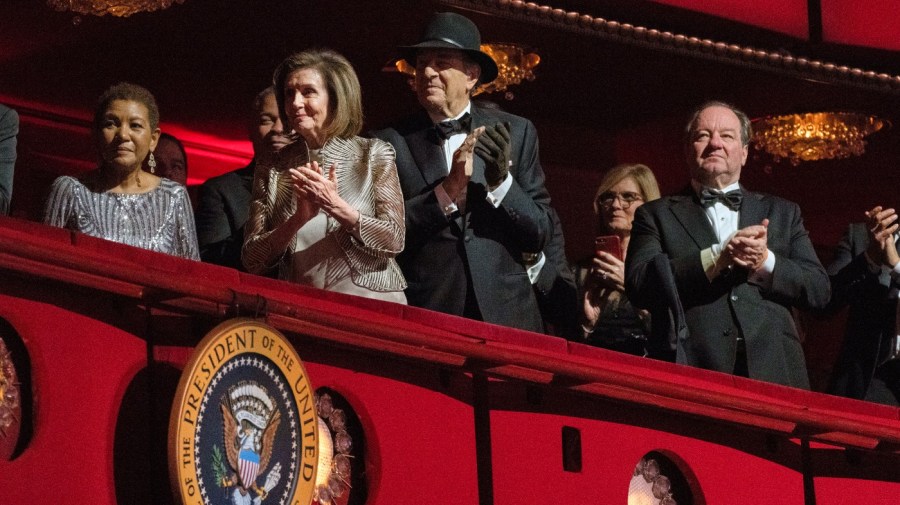 (The Hill) – Washington gave a bipartisan salute to the stars – and welcomed Speaker Nancy Pelosi’s husband after a brutal attack – as lawmakers on both sides of the aisle celebrated this year’s Kennedy Center Honors recipients.

Honorees are “recognized for their contributions to American culture through the performing arts,” according to the Kennedy Center.

For the second year in a row, President Joe Biden participated in the black tie affair. Biden’s presence there marked a dramatic change from recent years, when then-President Donald Trump bucked the tradition of having a sitting president present for the gala and stayed away from the event throughout his presidency.

Legendary “Midnight Train to Georgia” singer Knight told reporters on the red carpet about a visit to the White House to meet with Biden just before the honors gala.

“I’ve known him for so long, even though he’s the president,” Knight, 78, said of Biden. “I felt like he was my brother.”

“We go way back, you know if it’s good or bad, because some of them aren’t what they’re supposed to be,” she said. “But he’s amazing. He has such a gentle heart.”

“I’m really really excited that everyone’s coming and we’re going to see a bunch of Republicans here tonight,” Klobuchar said when asked if the proportion of Democrats and Republicans might be a sign of tensions between the parties thaw in Congress.

“Art brings people together, and Washington is ready to talk and meet again, dust off the old dresses and tuxedos and wear the shoes for maybe an hour because we’re all used to flats,” Klobuchar quipped.

When asked about the bipartisan turnout for the honors, Romney told ITK, “I think the Senate has operated on a bipartisan basis for a long time. We get along great and have done a lot in recent years.”

“We’re polarizing a little more as a nation, and that’s reflected in the individuals elected,” Romney said. “Hopefully we can keep the bipartisan effort alive.”

“We are undergoing a changing of the guard and I would certainly hope that we will have a fresh start with a new generation of leaders,” Beatty said, calling the evening a “great start.”

During the awards ceremony, the crowd rose in thunderous applause as Kennedy Center Chairman of the Board of Trustees David Rubenstein announced that Paul Pelosi, the speaker’s husband, was in the audience. It was 82-year-old Pelosi’s first public appearance since he was injured in an October attack at the couple’s San Francisco home by a suspect who was said to be searching for the California Democrat.

Pelosi and her husband clenched their hands and raised them in a triumphant gesture as the audience applauded.

During a segment honoring U2, actor and comedian Sacha Baron Cohen as his famous R-rated character Borat sent shockwaves through the packed crowd as he delivered some NSFW Trump-smashing one-liners to Biden.

“I was told that the President of the United States and A. are here today,” Cohen said in Borat’s thick, fake Kazakh accent.

“Where are you with Mr. Trump?” the comedian broke down. Eyeing Biden from upstairs in the presidential box, the entertainer quipped, “You don’t look so good! Where’s your gorgeous belly and your pretty orange skin?”

At another point, Cohen told the commander in chief as he sat next to First Lady Jill Biden, “I see you have a new wife. Woah, woah, wow!” The Bidens both laughed at the remark.

“I have to say I’m upset about anti-Semitism in the US and A. It’s not fair,” Cohen exclaimed. “Kazakhstan is the number one Jew-destroying nation. Stop stealing our hobby. Stop stealing!” Cohen sang, appearing to borrow a phrase from supporters of Trump’s unsubstantiated claims of mass voter fraud in the 2020 presidential election. Cohen then performed a short song that ended with him turning against a guitar.

Clooney, Damon said, once “stole Bill Clinton’s stationery and wrote fake notes to actors saying how much the President loved their films.”

The Kennedy Center Honors will air December 28 on CBS.