JPMorgan has declined to include India in a widely watched bond index until at least next year after investors raised concerns about the domestic market’s ability to handle the large volume of expected capital inflows.

India’s rupee-denominated bonds have been “watched positively” for a year, leading some analysts and investors to expect a decision to add the bonds to the GBI-EM Global Diversified Index this month, with inclusion in 2023 target.

The inclusion would have put a large chunk of India’s 1 trillion rupee-denominated bond market at risk.

According to a person familiar with the matter, JPMorgan’s decision not to issue the bonds was due to investor concerns about India’s market infrastructure.

Gloria Kim, head of index research at JPMorgan, said the Indian market has made “considerable strides in facilitating access for foreign portfolio investors. . .[We]will continue to work with regulators and market participants and gather feedback on sufficient resolutions to the remaining hurdles.”

The bank opened consultations with fund managers earlier this year, which manage about 85 percent of the $240 billion in assets that track the benchmark.

Managers expressed “overwhelming” concerns about India’s lengthy investor registration process and its market providers’ ability to handle the volume of trade clearing, settlement and custody that would follow post-inclusion, said the person familiar with the process. The person added that India is likely to remain on “index watch” for another six to nine months – without the positive outlook of its previous status.

A strategist at a Western investment bank in Asia said foreign investors are concerned about India’s ability to clear and settle, particularly in relation to trade matching, which ensures buy and sell orders from both parties are lined up in a transaction.

Important parts of this process are still handled manually in India, such as: B. Matching the timestamp to the minute and the size of a trade to two decimal places, with discrepancies resulting in the automatic cancellation of a transaction.

Another major challenge was where and how bonds would be traded, whether outside India’s borders on a platform like Euroclear, which is familiar to global financial institutions, or in India, where investors would have to go through onerous registration procedures.

A capital gains tax exemption for foreign investors, which would have paved the way for easier processing at Euroclear, had been expected by analysts ahead of this year’s tax announcements in February, but failed to materialise. 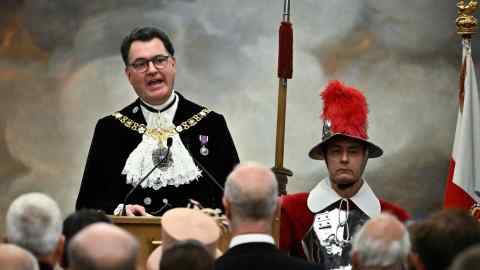 “With operational issues, it’s always a work in progress,” says the strategist. “It’s an emerging market. . . They don’t trade US Treasuries.”

A decision to add Indian debt to one of JPMorgan’s flagship indices would mark a turning point in global investor exposure to the world’s fifth-largest economy and the result of years of discussions between the Indian government, index providers and investors.

Indian authorities have long been wary of opening the country’s financial markets to foreign hot cash flows, which can quickly change direction. The government’s ability to borrow in local currency in local markets, rather than risk borrowing from foreign investors in foreign currency, has been a valued bulwark against volatility in global markets.

But analysts say the government has been persuaded money compared to indices is likely to be “stickier”.

Britney Spears' mother opens up about her daughter's wedding, even though she wasn't invited

Germany has a special responsibility to stop Putin’s evil

The NHS faces the biggest restructuring of leadership in decades