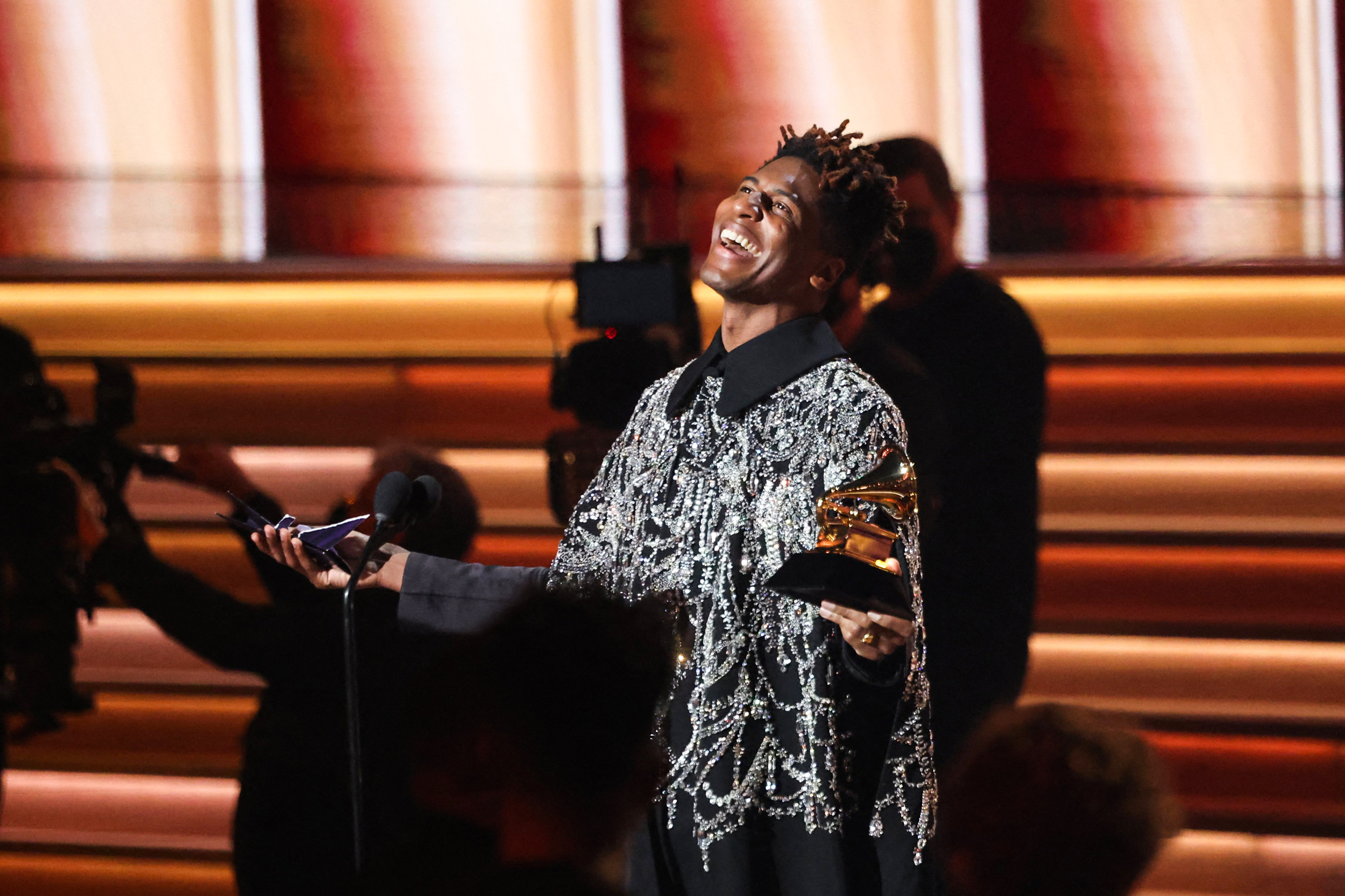 LAS VEGAS — Jon Batiste won Album of the Year for “We Are” at Sunday’s Grammy Awards, presenting him with five trophies in a night where Silk Sonic’s ’70s funk was named Record of the Year and Song of the Year year, newcomer Olivia Rodrigo accepts three awards.

The multi-genre performer also won for his song “Cry”, the video for “Freedom” and his work with Trent Reznor and Atticus Ross on the soundtrack for “Soul”.

R&B supergroup Silk Sonic took home awards in all four categories in which they were nominated, including Record of the Year. Olivia Rodrigo collected three trophies, including the coveted award for Best New Artist.

Bruno Mars and Anderson .Paak were elated as they accepted the honors towards the end of the ceremony. The win brings Mars back into historical company: along with Paul Simon, he becomes the only artist to take home the award three times.

“We’re really trying our best to stay humble at this point,” .Paak said. “But in the industry, that’s what they call a clean sweep!” He later added, “Drinks are on Silk Sonic tonight!”

The victory came after the night’s celebrations grew somber, as Ukrainian President Volodymyr Zelenskyy addressed the gathering with an update on the war, including among his tally children injured and killed. “Our musicians wear body armor instead of tuxedos,” he said. “We are fighting against Russia, which brings terrible silence with its bombs. The dead silence. Fill the silence with your music.”

A veteran of the High School Musical series, Rodrigo became the breakout music star of 2021, with her massive viral hit Drivers License leading the way, followed by single Good 4 U and aching album Sour ‘, which followed Best Pop Vocal Album.

Silk Sonic – the all-star union of Bruno Mars and Anderson .Paak – opened the Grammys in Las Vegas with their energetic, infectious mix of retro soul and funk by performing their “777”. They returned to the stage a short time later to collect the song of the year trophy for “Leave the Door Open.”

The win helps Mars tie the record for most wins of the year. He previously won for 24K Magic.

By the time the show began on CBS, Jon Batiste had already taken home four Grammy Awards, including his first ever. Batiste won for Best American Roots Performance, Best American Roots Song, Best Music Video and, jointly with Carlos Rafael Rivera, Best Score Soundtrack for Visual Media. His song “Freedom” beat several other tough contenders in the music video category, including Rodrigo, Lil Nas X and Eilish. All awards were presented during a ceremony prior to the broadcast.

It was a Family Affair from cousins ​​Baby Keem and Kendrick Lamar, who won best rap performance for their song “Family Ties.” Lamar won his 14th Grammy and the first for Keem, who said “nothing could have prepared me for this moment” after taking to the stage to accept his trophy.

Chris Stapleton won his third Grammy for Best Country Solo Performance for You Should Maybe Leave. He extended his record for most wins.

Dressed all in black, BTS took the stage with a flirtatious moment between V and Rodrigo before the group performed their hit single “Butter.” They performed after one of the members tested positive for COVID-19.

Foo Fighters won three awards on Sunday but weren’t there to collect their trophies following the recent death of drummer Taylor Hawkins. An extended tribute to Hawkins played prior to the show’s In Memorium segment to honor deceased artists and music industry figures.

Eilish paid tribute to Hawkins during her performance by wearing a black t-shirt with his picture on it. She took to the stage with her brother Finneas in an upside down house before stepping out into the rain to perform the title track from her “Happier Than Ever”.

TJ Osborne, who came out as gay last year, fought back tears as he and his brother accepted a Grammy for the Brothers Osborn song “Younger Me.” He noted that the song was inspired by his coming out.

“And here I am tonight not only accepting this Grammy Award with my brother who I love so much, but I’m here with a man who I love and he loves me back. … I don’t know what I did to get so lucky.”

The ceremony was moved from Los Angeles to Las Vegas because of rising COVID-19 cases and the Omicron variant in January, with organizers citing “too many risks” for hosting the powerful show at the time.

Crooner Tony Bennett, 95, who retired from performing last year because of his Alzheimer’s diagnosis, extended his record as the artist with the most traditional pop song album wins at 14. Sunday night’s trophy went to “Love for Sale,” a duet album with Lady Gaga.

Should you get the monkeypox vaccine?