Jamie Dimon has warned of “very volatile markets” to come as the Federal Reserve tightens monetary policy, writing in his annual letter to JPMorgan Chase shareholders that the US banking group is prepared for higher interest rates.

The chief executive told investors he doesn’t envy the Fed the steps the Federal Reserve needs to take end its ultra-loose policy but urged them “not to worry about volatile markets unless they impact the actual economy.”

“If the Fed does everything right, we can have years of growth and inflation will eventually come down. In any case, this process will create much consternation and highly volatile markets,” Dimon wrote.

JPMorgan’s letter to investors is one of them most read messages on Wall Street, with Dimon, 66, using it to comment on issues well beyond the bank’s business.

The Fed last month raised up its benchmark interest rate for the first time since 2018, marking the start of what central bank officials have signaled this year as a series of hikes to combat the tide highest inflation in four decades.

Banks like JPMorgan, the reported Record profits in 2021 could benefit from higher interest rates that would allow them to earn more on the loans they originate.

“Our bank is prepared for dramatically higher interest rates and more volatile markets,” Dimon said in the 44-page letter.

He added that the war in Ukraine and the resulting sanctions against Russia “will at least slow down the global economy – and it could easily get worse.”

Dimon also urged the US government to develop a new “Marshall Plan” to help contain it Europe’s energy dependency on Russia and referred to the US policy put in place after World War II to provide financial aid to the continent. 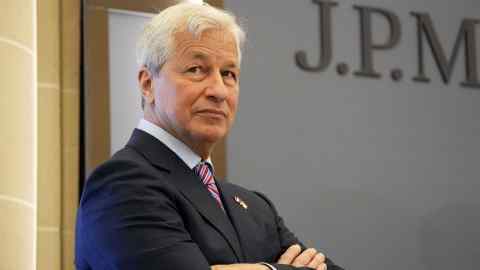 Dimon also explained a 30 percent increase in JPMorgan’s capital spending this year to $15 billion, including why the bank would spend billions of dollars on technology Expansion into UK retail banking after criticism of the initiative.

“We believe the digital world offers us an opportunity to build a consumer bank outside of the United States that can become very competitive over time – an option that doesn’t exist in the physical world,” Dimon wrote.

JPMorgan shareholders told Dimon and his leadership team at a meeting in February that the bank was providing insufficient detail on its spending plans The Financial Times reports.

Dimon added that he hopes “a few examples will give you comfort in our decision-making process.”