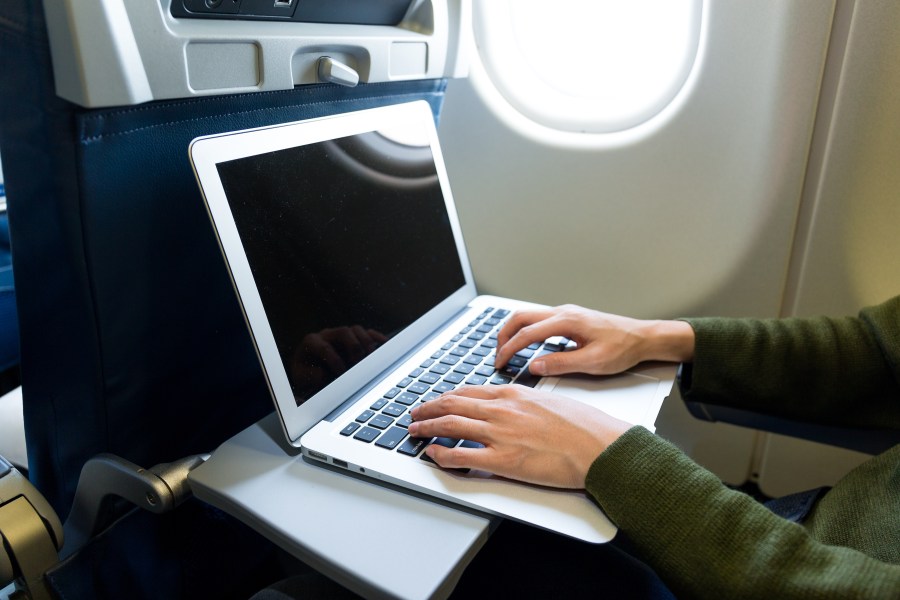 (NerdWallet) – Regarding Wi-Fi on flights, it sometimes feels like you’re rolling the dice every time you fly. Is there WiFi on the plane? If so, will the WiFi on the plane work or will it be very slow? Also, is it safe to tell coworkers on a flight that you’re “online and available for work”?

Although most airlines offer WiFi on most continental routes in the United States, it can be a little patchy at times (to put it nicely). Why are some in-flight Wi-Fi connections excellent — and others terrible?

Let’s take a look at the different types of airline WiFi, which one is best and how to figure out what you’ll have on your next flight.

The 3 main types of Wi-Fi on airplanes

Air to Ground or ATG

The first is air-to-ground, where antennas are installed on the belly of the aircraft. These antennas pick up signals from land-based cell towers.

This type means you shouldn’t have lost coverage when traveling over places with good cell phone service. But in remote places or over large bodies of water? That’s when you start to run into problems.

The other two types of Wi-Fi on planes involve satellites, meaning the plane picks up Wi-Fi signals from the sky.

JetBlue Airways, for example, uses a Ka-band satellite antenna to power the internet and live TV onboard its A220 aircraft, according to JetBlue’s internet provider Viasat.

There’s an up and coming player in the inflight Wi-Fi space to help you sneak in some work or maximize airline entertainment. Though not widely available, SpaceX’s Starlink program is slated to launch next year on a single airline, Hawaiian Airlines.

Starlink wants to offer ultra-high-speed WiFi on flights. Hawaiian is the first airline to sign a deal for this internet, the speed of which is only increasing as the company continues to launch satellites.

Not all aircraft WiFi is created equal

We’ve talked about the different types of Wi-Fi on planes, but not their speeds. This is important; You don’t want to pay for an internet package on board only to find that the WiFi is barely usable.

Air-to-ground is the slowest of the three main types of Wi-Fi and gives you access to things like email and social networking. Ku-band is much faster – but the speed of your service will depend on how many planes are currently using each satellite.

Ka-band, on the other hand, is the fastest of the three most common types, but also the most limited.

According to internet speed test provider Ookla, Starlink has improved its internet speed by 38% in the US over the past year. This bodes well for any airline jumping on the Starlink bandwagon.

If you want to know in advance if you have good WiFi, here are a few tips to understand what to expect.

Is wifi offered and if so will it work for you?

First, make sure the plane you are flying even offers Wi-Fi. Reviewing the policies can help determine if they meet your in-flight needs.

Check the WiFi coverage map of the airline you are flying with. A quick online search can provide you with details about the airline of your choice and their Wi-Fi offerings.

United Airlines, for example, works with four different WiFi providers: Gogo, Panasonic, Thales and Viasat. It offers a map for each service, letting you know where you have Wi-Fi and where it will be spotty. The site also tells you which aircraft is equipped with which service.

How fast will it be?

Find out what kind of Wi-Fi the airline offers to better predict what internet speeds you can expect. As a reminder, the most common Wi-Fi types are ATG, Ku-Band, and Ka-Band (listed from slowest to fastest).

Delta Air Lines, for example, offers a simple coverage map that lets travelers know which planes rely on which types of satellites.

This research might sound like a lot of work, but it can be worth it when you’re spending 12 hours in the air and stressed out responding to an urgent email.

The good news is that Wi-Fi on planes is not only getting better, it’s also getting cheaper. You might even get it for free. For example, JetBlue offers free “Fly-Fi” on all flights, and certain airlines offer free WiFi to Elite members.

Here are the major US carriers and the cost of messaging and Wi-Fi:

Many airlines offer free messaging (without paying for inflight WiFi) if you use a messaging app like iMessage or WhatsApp, as well as free movies, TV shows, and music. However, with WiFi on board you can access more websites than are available to passengers free of charge.

If you want WiFi on your flight

Many airlines offer Wi-Fi on flights, but not all services are created equal. We’re seeing better speeds thanks to advances in technology – but many planes still rely on outdated equipment, so you’ll have to wait a while for this Facebook feed to load.

If you’re wondering if WiFi meets your needs for your upcoming trip, you can check your airline’s coverage map. Otherwise, cross your fingers, spend a few bucks on the internet package, and hope for the best.

https://wgntv.com/news/is-there-wi-fi-on-planes-thats-actually-good-how-to-know/ Is there WiFi on the plane that is really good? how to know