Barcelona are three points clear of Real Madrid at the top of La Liga this weekend and beat Atletico Madrid on Sunday night to capitalize on Real’s slip-up at Villarreal. It was a game of two halves; the first very open, the second very rough. Barcelona dominated in the first 45 minutes, then Atletico went into the fast lane.

Barcelona held out late in the game and unconvincingly defended deep as Atletico recovered, but the crucial phase of the game was the opening 20 minutes, which culminated in Barcelona scoring the only goal. Ousmane Dembele’s goal not only came, but exactly how it came.

As usual, Xavi Hernandez’s system was fluid and included Alejandro Balde aggressively pushing from left-back to left-winger, transforming Barcelona into a 3-2-5 while Jules Kounde tucked in from the other cross. Gavi played to the right of the midfield trio but became more of an inside right player, while Pedri started from a wide left position but drifted inside to become an inside left, leaving Balde ahead.

That was the general system on the pitch, although Pedri briefly swapped positions with Frenkie de Jong, who played in midfield to the left of Sergio Busquets. 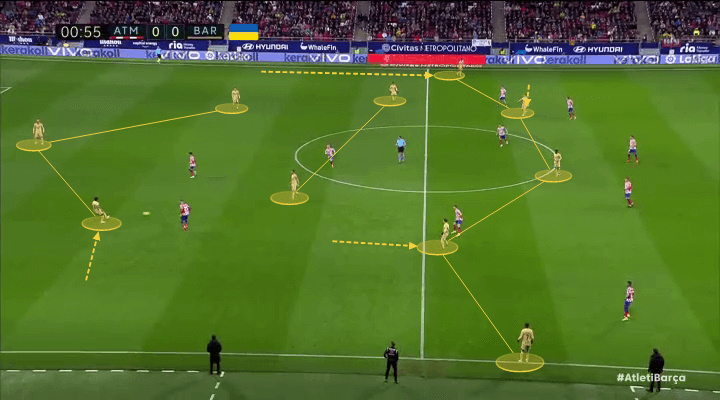 But this change of position wasn’t just a caveat – it was a key feature of Barcelona’s game. The exchange of positions between Pedri and De Jong caused Atlético big problems and finally led to the breakthrough.

Here’s how Diego Simeone’s side tried to deal with Barcelona’s swings. Right midfielder Marcos Llorente pursued Balde and became a right-back, transforming Atletico’s defense into a back five. As simple as that.

That meant world champion right-back Nahuel Molina would tuck in. But because he was worried about Gavi – or De Jong – floating in midfield, he was constantly tempted to be higher up the pitch. Here, de Jong is on the ball and Pedri is highlighted in midfield. Molina deals with these two.

And that was an early warning sign. Molina is focused on staying close to Pedri, so de Jong just sprints past him and into an open channel, demanding a pass that doesn’t come.

The movement continues in a more central position and ends with Gavi passing a pass to Dembele on the right. This would also become an issue for the first 20 minutes.

Six minutes later, here’s another example of De Jong on the ball, down the center line, and Pedri’s deep positioning, luring Molina onto the field.

Three minutes later, this resulted in an attack that anticipated the goal. Molina again pushes high from defence, trying to stay close to Pedri, who has the ball and retreats down the left channel. Again, de Jong simply charges into the open channel – and this time the ball is played into him via Busquets.

De Jong then passes the ball to right centre-back Gavi, who has pulled Atletico left-back Reinaldo inside, leaving Dembele free on the outside.

Dembele tries to look inside but he’s dispossessed. Remarkably, Llorente is the Atletico player who makes the decisive tackle. Tasked with becoming a right-back, the right midfielder has sprinted all the way over to cover the left-back. That’s the extent to which Atletico have been pulled out of shape.

But Simeone didn’t try to make any adjustments, which came as a surprise. Atletico stayed in that form – a back five, three midfielders playing left of the field and a front two. Essentially, they didn’t have a midfielder on the right, meaning De Jong had oceans of space to drop deep and gain possession.

In such situations, Simeone has often asked one of his attackers to withdraw to midfield – both Antoine Griezmann and Joao Felix have done this well in the past – but here Atletico continued with two forwards, prompting Barcelona to attack into space the other side of their midfield trio.

And Barcelona kept getting better. Here, Busquets passes the ball to De Jong, who is the perfect midfielder to take advantage of this type of space. He dribbles 25 yards forward.

Gavi, Barcelona’s inside right, decided he wanted some of the action. Despite the fact that Pedri and De Jong are both in that channel, Gavi drifts to that side, gaining possession and dribbles 20 yards forward.

But it was a third player, Pedri, whose left channel dribbling proved crucial.

Here’s a familiar situation – Atletico in a backfive and Molina trying to get forward to Pedri and/or De Jong, who combine. De Jong passes Pedri inside, and Pedri forms as if playing a back pass to De Jong. This deceives Molina, who suddenly lunges at the Dutchman.

This is fatal. That’s Pedri’s cue to check right. He dribbles away from Griezmann, between Koke and Pablo Barrios, and into the space cleared by Molina, who is now out of the game. He finally carries the ball 20 meters into the penalty area. And from there, like the earlier move, it’s all about playing it to Gavi, who pulled Reinaldo in, and then Dembele, who hangs wide again.

This time Dembele provides a finish for the first time and Barcelona have the decisive goal.

Not everything went smoothly for Xavi’s side. In the second half they fought for possession, invited too much pressure and defended crosses unconvincingly.

But the crucial tactical battle came in the first 20 minutes when Xavi outmaneuvered Simeone in a way perfectly demonstrated by the goal. At the end of the season, this could look like a crucial result.

https://theathletic.com/4071376/2023/01/09/barcelona-atletico-liga-result/ How Xavi’s fluent Barcelona capitalized on Atletico Madrid to climb to the top of La Liga

The Glory: Young and old cast and lost characters explored

Can you guess who? Enter today and you could pocket £1k! – talkSPORT