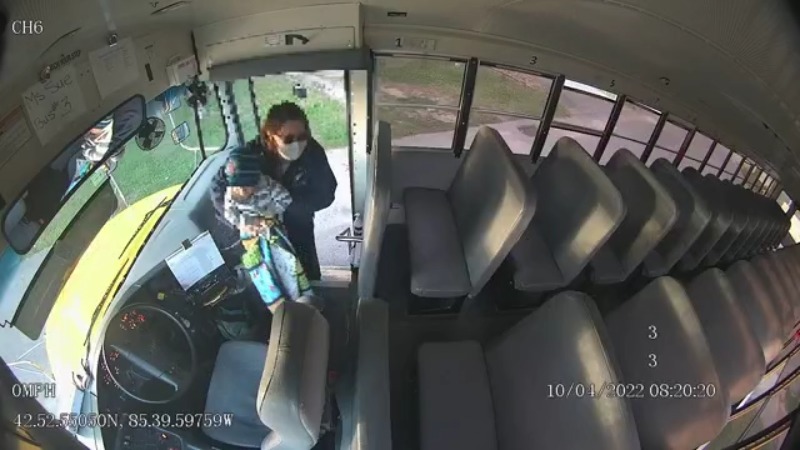 KENTWOOD, Mich. (WOOD) – The rescue of a 2-year-old who was in a vehicle when it was stolen and abandoned on the side of the road earlier this week was caught by school bus security cameras.

The vehicle was stolen from the 48th Street and Marlette Avenue area of ​​Kentwood around 8:10 a.m. Tuesday, according to the Kentwood Police Department.

Dave Skinner, a bus driver for Kelloggsville Public Schools, was passing the area when he was pulled over by parents who said their baby was in a vehicle when it was stolen.

In the bus surveillance video, Skinner can be seen calling 911 to report that a car with a 2-year-old boy in it has been stolen.

‘Heroes’: Bus drivers help 2-year-old to safety after his car is stolen


After relaying the information to dispatch, Skinner went on the radio to let the other bus drivers know that a vehicle with a child in it had been stolen.

Another Kelloggsville Public Schools bus driver, Sue Figueroa, quickly realized that she had just passed a boy wrapped in a blanket in a driveway.

In the surveillance video, Figueroa can be seen circling her bus, getting out of the vehicle and rescuing the 2-year-old.

“I have the baby,” she said over the radio after putting the boy on the bus.

“Oh dear God. Thank you. Thank you,” someone on the other end of the radio says.

The two-year-old is placed in one of the seats on the bus and Figueroa drives him back to his parents.

When they arrive, they are seen yelling from the bus doors, “Mom, is this your baby?” as his parents run up.

European Super League holdouts are gearing up for a fresh start