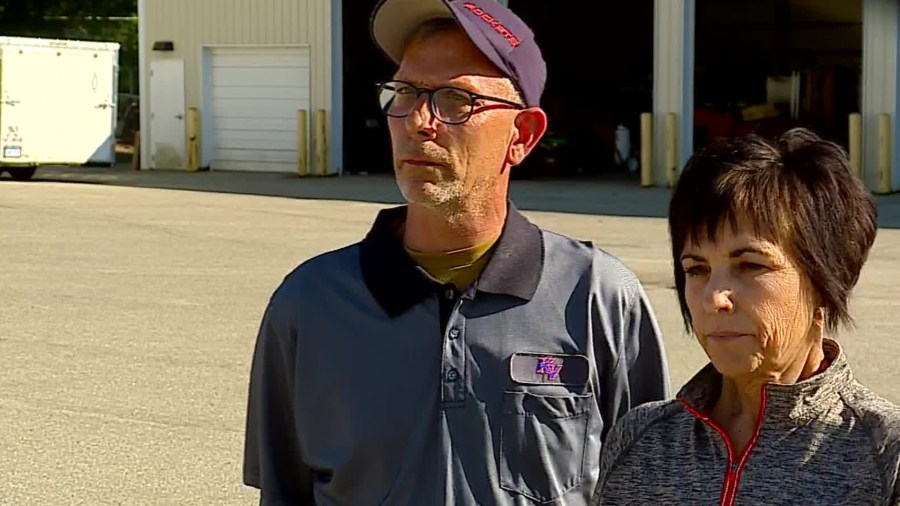 KENTWOOD, Mich. (WOOD) – A 2-year-old is safe after a vehicle with the child inside was stolen on Tuesday, police say.

The vehicle was stolen around 8:10 a.m. in the area of ​​48th Street and Marlette Avenue in Kentwood, according to the Kentwood Police Department. Police said shortly after officers were dispatched to the area, a person called and said a 2-year-old had been left on the side of the road nearby.

The toddler was not injured and has been reunited with his parents, police say.

The morning started like any other for Dave Skinner as he made his daily commute as a bus driver for the Kelloggsville Public Schools.

But around 8 a.m. he met parents on the street who were desperately calling for help.

“They yelled at me that someone stole their car with their baby in it,” Skinner said. “So I immediately called 911.”

Wilfred Gonzalez sees the family across the street at the bus stop every day. But on Tuesday morning, the family’s worst nightmare came true when their baby was taken from them in a stolen car.

“It happened in a split second,” Gonzalez said through an interpreter. “That hasn’t happened in a long time. It happened so quickly that everyone got confused and tried to help the mother disappear.”

After relaying information to dispatch, Skinner said he went on the radio to let the other bus drivers know that a vehicle with a child in it had been stolen.

“It was kind of shocking,” Nickelson said. “I just sat there like… did he really just say that? Did that really just happen?”

As Skinner’s call came through, another bus driver, Sue Figueroa, noticed that she had just passed a boy wrapped in a blanket at the curb.

“(Figueroa said) ‘I just drove past a baby on the side of the road with a blanket,’ and I immediately said, ‘You’ve got to turn around and go back there,'” Nickelson said.

Figueroa was able to pick up the toddler and bring it to his parents.

“It was probably the longest four to six minutes[of the mother’s life],” Nickelson said.

Nickelson said Skinner and Figueroa are “heroes” and that she is proud to work with them.

“It could have been worse. … This mother was so scared and I just can’t imagine what it would have been like not knowing where your baby was,” she said.

Skinner said he was just doing his job.

“I don’t know if we’re heroes,” Skinner said. “The drivers are very attentive to all the children in the neighborhood while we pick them up. And if they see anything weird or strange, they quickly pick up the radio and call back.”

But thanks to Skinner’s intervention, a family is reunited with their baby.

“I’m just glad your kid is safe at home,” Skinner said. “Cars are replaceable. But I’m glad her kid is home. It was a good day and a good result.”

Police say the stolen vehicle was soon found in Grand Rapids. Officers were unable to find a suspect.

https://www.woodtv.com/news/kent-county/kentwood-police-vehicle-stolen-with-toddler-inside/ 'Heroes': Bus drivers help 2-year-old to safety after his car is stolen

European stocks and US stock futures are staging a strong rally

Michigan man gets 70 to 100 years for hammer murders

The Kalamazoo Marathon brings back the 26.2 mile race