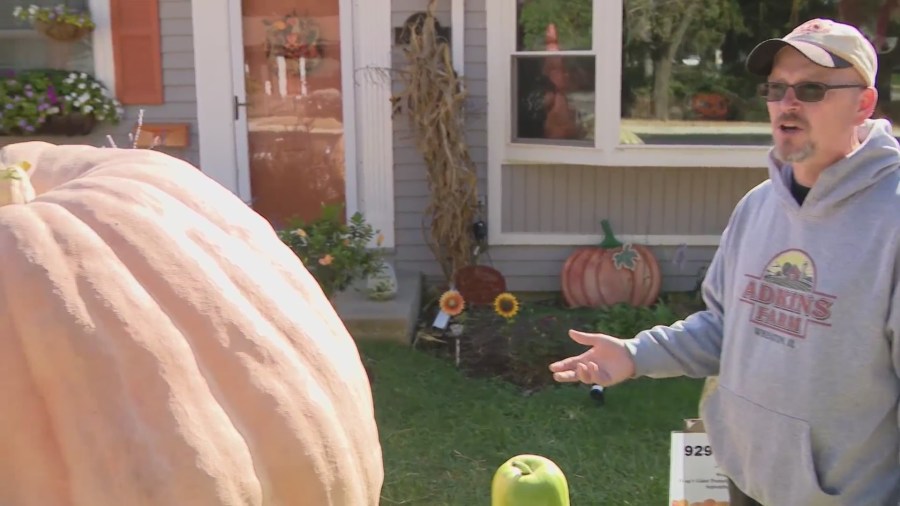 Wheaton, Illinois — Weighing 1,760 pounds, a giant pumpkin on display outside a home in Wheaton is the largest in Illinois this year.

“A little smaller than we hoped,” joked Joe Adkins, who has been growing giant pumpkins in his garden for the past decade.

The hobby grew out of a love for carving pumpkins. After years of growing giant pumpkins in his garden, Adkins has high expectations for his harvest, adding that he knows exactly how to get the most out of his pumpkin patch.

“A lot just depends on how the growing season goes for you,” he said. “There’s a lot of experience in it, and you bring it over to the next year and the year after that every year.”

The five largest pumpkins in Adkins’ harvest are displayed in front of his house. The largest pumpkin won first place at the Illinois Giant Pumpkin Grower Association’s annual weigh-in in September. Equally impressive is a giant green squash, which Adkins added to his crop for the first time this season, setting a new state record at 929 pounds.

“It’s a great feeling and it’s not easy to grow a giant pumpkin and put it on a scale, weigh it and then bring it into your home and display it,” Adkins said.

Adkins says part of the fun is showing off the big winners. Parishioners drop by every October to see the giant pumpkins; The hobby has even inspired some young breeders in the neighborhood. Adkins shared his tips and tricks with 10-year-old Andrew Engel, who lives around the block.

“He taught me a lot about how to move them and how to pollinate them,” Andrew said.

Engel has planted his own giant pumpkin patch — his largest this year weighed 158 pounds — but he’s just getting started. The 10-year-old says he plans to improve his pumpkin weight over the next year.

Adkins says he plans to follow suit. His goal is to grow a pumpkin that is 2,000.

“A little more help from Mother Nature would have been really nice,” he said. “That would probably have brought us to £2,000, but as the Cubs say, there’s always next year!”

https://wgntv.com/news/growing-giants-gourds-is-an-award-winning-pastime-for-wheaton-man/ Growing giant pumpkins is an award-winning pastime for the Wheaton man

4 bears break into a home in Pocono Lake, Pennsylvania and ransack a refrigerator