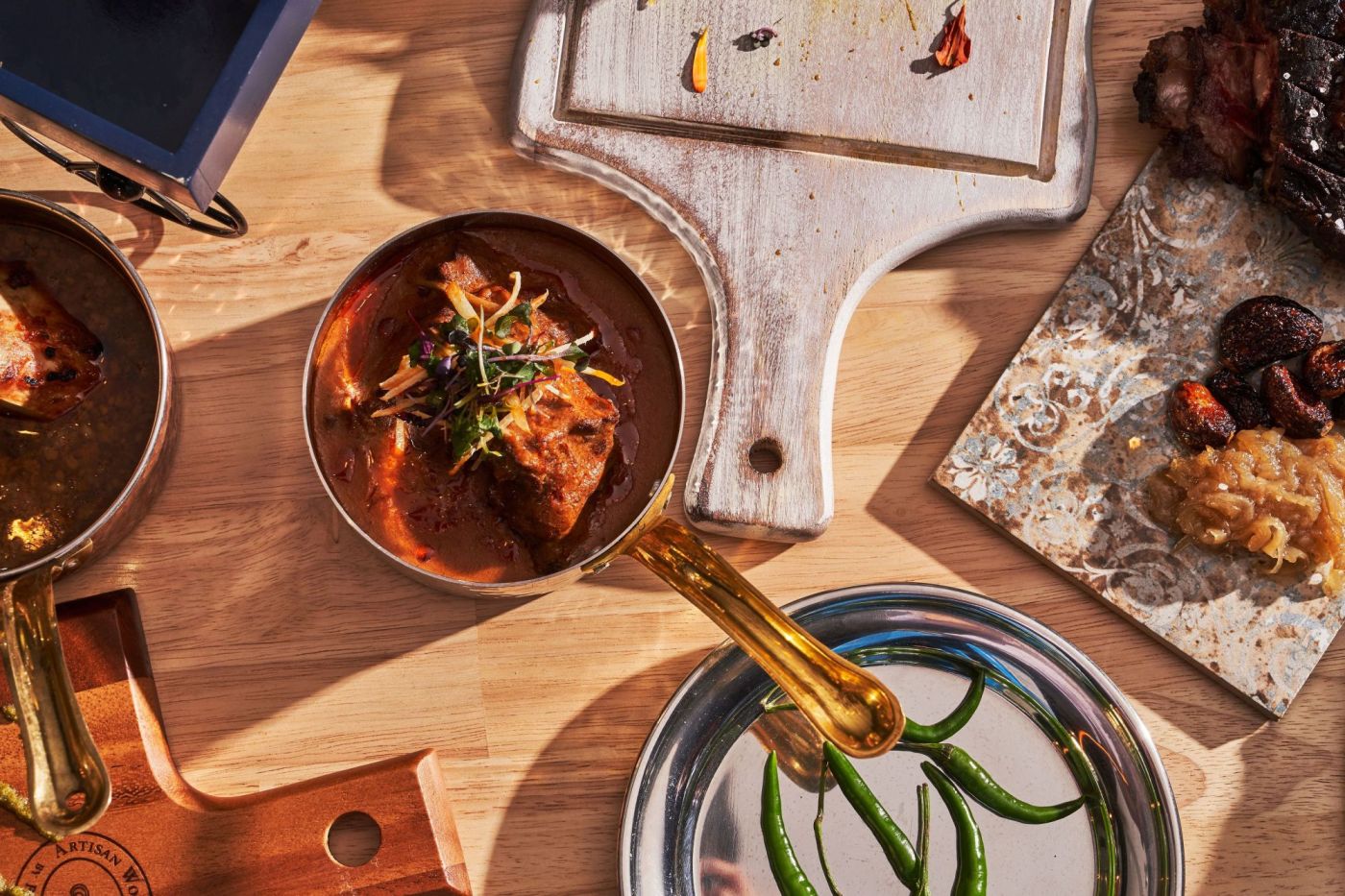 Chef Imran Ali Mookhi, the innovator behind this 100% Halal eatery, combines the flavors and cooking techniques of India, Pakistan and Afghanistan.

“Desi means it comes from the subcontinent, the people from Afghanistan, Pakistan, India, Bangladesh,” chef Ali explained the restaurant’s name, “and Craft because we make everything in-house.

“Pakistani and Indian cuisine, the techniques and spices are the same. Before 1947 they were one country, so the roots are the same,” he said. “Indian is more vegetarian. Pakistan is heavily fueled by meat and protein.

“Our concept is to elevate Indian food, plating and presentation with a farm-to-table concept,” he added. “There are Pakistani restaurants but no fine dining.”

He said they chose Fullerton and opened the restaurant, and 15 days later the coronvirus pandemic forced them to close.

“Our concept is casual fine dining, so we had to change a few things. We were closed for two months and then only opened for takeout,” he said. “Then we went for al fresco dining, which we still have. I don’t know how we did it, but we did it.”

Chef Ali came to the United States in 2000 at the age of 17. His dream was to go to school and study computers.

“I got a job washing dishes in a restaurant. It was my first time working. Everything was taken care of in my family,” he said. “Later I became a prep man and then a salad chef, line cook, then I worked as a sous chef on the line. I opened a mom and pop restaurant in Pasadena called Delhi Palace. From there I went to one of the top Indian Michelin Star restaurants, Gaylord in Beverly Hills.”

His other credits include Tantra on Sunset, Tamarind in Newport Beach, Dosa in San Francisco, and Tumbi in Santa Monica, also recognized by Michelin.

“Our favorite dishes are street food,” he said. “There are stalls on every corner on the subcontinent.

“Our Pani Puri is a semolina puff pastry filled with chickpeas, potatoes and onions, served with tamarind and mint water. You take the water and the puff pastry in one bite, and then you get that flavor explosion in your mouth. Then our Sloppy Khan is very popular. It’s like a Sloppy Joe, but our version is with Wagyu beef. Of course, our skewers are also popular.”

A significant part of the menu is dedicated to curries. Unfortunately, the word “curry” suffers from misunderstandings.

“People think that curry is a spice means it’s too spicy,” he said. “It’s not a spice; it’s a sauce.”

An interesting dish on the menu is Nihiri Breakfast Curry, which chef Ali says was created for the Moghal king around 800 years ago.

“It was very heavy and rich and should be a breakfast curry fit for kings, not your everyday dish,” he said. “Generations later, it was served at weddings. It takes eight to ten hours to make. It’s a slow process.”

Khan Saab is 100% non-alcoholic and known for its mocktails.

“Muslims don’t drink,” explained chef Ali. “I don’t drink myself. I would go to a restaurant and if you have to wait you have to sit at the bar. If you can’t drink you’re missing out on the whole experience, so we wanted to create something to be proud of, not just juice in a glass with ice.

“We hired a mixologist,” he said, “and in fact, our first article mentioned this alcohol-free bar in Fullerton. We were first in California and fourth nationwide.”

Fullerton’s Judy Bart Kancigor is the author of Cooking Jewish and The Perfect Passover Cookbook. Their website is cookjewish.com.

1. In a large saucepan, bring 10 cups of water to a boil; Add onions and tomatoes. Cook until mixture is reduced to about 7 cups. Puree in the food processor.

2. In a large, heavy skillet, add oil, cinnamon sticks, cumin, and bay leaf. When the spices crackle, add the ginger-garlic paste (to make the paste, add 2 ounces of chopped fresh ginger, 12 cloves of garlic, and 1/4 cup of water to the food processor and mix until smooth) and cook it stirring until brown. Add remaining spices; mix well. Add onion and tomato puree and cook until thickened. Add chicken and cook until juices run clear. Garnish with ginger, coriander and fresh lemon juice.

Joe Biden travels to COP27 to demonstrate US leadership on climate

Interview with Benjamín Labatut: When we stop understanding the world

Dredging to close part of South Haven shoreline next week