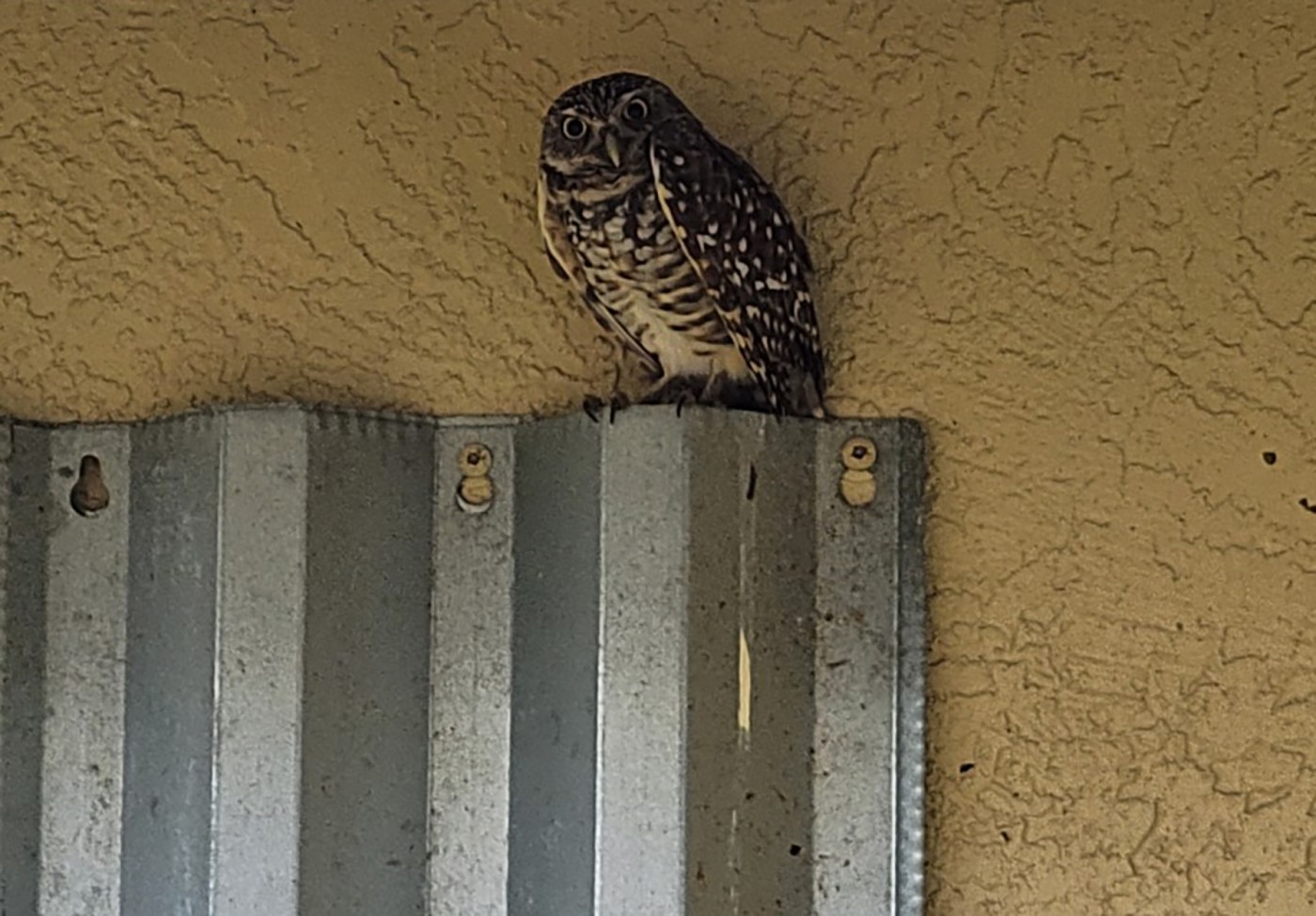 Southwest Florida looks very different than it did six weeks ago, before Hurricane Ian hit the area.

The green island of Sanibel has turned brown, its trees felled by the storm or drowned in the salt water. And Cape Coral, a meticulously planned community bisected by rows of canals, still burrows out from under rubble.

Ian resulted in the deaths of at least 130 people and the displacement of thousands more. Now that residents begin to rebuild, questions remain about the future of its diverse, vitally important native species.

Animals are built to withstand natural disasters – but they are not equipped to survive in degraded habitats with poor water quality. Species like gopher tortoises, burrowing owls and even American alligators, all of which play important roles in maintaining the balance of their ecosystems, have been displaced or injured since Ian struck. Some of the animals have hardly been sighted since the storm.

“Wildlife evolved along with natural disasters — they understand when they’re coming,” said Breanna Frankel, rehabilitation manager at CROW Clinic, a wildlife hospital on Sanibel. “It’s all of the additional things that the hurricane has led to that I think we’re seeing more problems with.”

It will be months, maybe years, before wildlife experts understand the extent of the damage. But what they’ve seen in the weeks since Ian uprooted her life hints at what the future might hold for the state’s native wildlife.

“So many habitats are slowly going into shock,” Frankel said. “Whether our ecosystem can overcome that,” remains to be seen.

Southwest Florida is home to a unique set of ecosystems that support vital keystone species: wetlands and mangrove forests, Gulf of Mexico beaches, hammocks, prairies and grasslands, among others.

Keystone species are the engines of their local ecosystems – their habitats run because they do. Keystone species in Florida include gopher tortoises, whose burrows provide shelter to more than 350 species, and alligators, which dig holes for freshwater during the dry season, which turtles and shorebirds also use. Alligators’ nesting habits also make them perfect security guards for the eggs of other species – the reptiles are fiercely protective of their nests and keep coyotes and raccoons at bay.

But imbalances in the water are troublesome: gopher tortoises are terrestrial creatures, which means they don’t spend much time in the water (they’re also poor swimmers). They can hold their breath when their burrows flood, but Hurricane Ian’s floodwaters also brought debris into their homes and clogged them. Alligators can tolerate salt water for short periods, but they are used to hunting, breeding, and living in freshwater habitats.

Saltwater has inundated some of Sanibel’s freshwater sources, said Chris Lechowicz, herpetologist and director of wildlife and habitat management at the Sanibel-Captiva Conservation Foundation (SCCF). Taking measurements along the Sanibel River, an important freshwater habitat for several species of turtles, he found that salinity had increased from 0 grams of salt per kilogram, or 0 ppt (parts per thousand), to 24 ppt in some spots. a few grams away from saltwater classification.

“The freshwater system was almost seawater,” Lechowicz said. “That will change a lot of the diversity in this space.”

All that salt water is also harmful to native tree species. Many of them have already died after being hit by strong winds, but the survivors often cannot tolerate salty soil. This will drastically change ecosystems on Sanibel, Lechowicz said.

“We will see a decline in trees,” he said. “Many trees have been downed, but those that are still standing could die from saltwater intrusion on the islands anyway.”

Debris from damaged homes still clogs areas of Southwest Florida that were hardest hit by Ian – including Sanibel and Cape Coral. Lechowicz, who normally monitors a very rare Florida mud turtle population in a small wetland area on the island, has not been able to reach the area in weeks.

Countless homes were destroyed in the area, particularly homes closest to the water. During floods, their sliding glass doors and windows were often smashed, and the water pushed out the contents of their homes. Many of those items ended up in conservation areas, he said.

Enter the Clean-up Crews: Pasha Donaldson, a former leader of the Cape Coral Friends of Wildlife, has wandered the city cleaning the homes of burrowing owls of trash. The tiny owl, a threatened species in Florida and heavily concentrated in Cape Coral, often makes its dens in empty lots or front yards, but many of those holes were completely covered up when Donaldson found them.

“The owls will return unless they’re killed or blown away,” she told CNN. “If (the city) doesn’t clean the actual burrow, the owls won’t come back – they can’t burrow through.”

She has noticed tire tracks on some caves and whole boats on other properties dedicated to the owls. Though she’s spotted owls in some unusual places — like her porch — she still sees fewer owls than usual, she said.

“Owls are like any other bird — unless they get cut up by the wind or fall into a building, they’re pretty smart at saving their feathers,” she said.

She won’t do the annual population census until June, which is burrowing owl ‘baby season’, and in the meantime she’ll be cleaning out the burrows and encouraging neighbors to dig burrows in their front yards to lure the owls home.

“Hopefully I’ll see more of them when I clean them up,” she said. “I think time will tell.”

In the weeks after the hurricane, the “bigger concerns” for wildlife rescuers were animals not being able to climb or fly out of harm’s way, Dr. Robin Bast, Vet at CROW Clinic. The clinic has seen an increase in turtle patients since the storm, who are increasingly being hit by cars looking for fresh water. Squirrels were also blown from their trees and ended up in the clinic.

For most species, it’s too early to say if — or how drastically — populations have suffered, but the SCCF has identified some signs of habitat health: Before Hurricane Ian, there were 17 sea turtle nests on the island. SCCF teams only found one in the weeks that followed – the others likely being washed away before hatching.

Swamp rabbits, once considered a nuisance by Sanibel homeowners because they frequently munched on their gardens, were rarely seen. And the American alligator, perhaps the state’s best-known predator, was nowhere to be found after the hurricane, Lechowicz said.

“Alligators can tolerate salt water for short periods,” he said. “But at some point they need fresh water. I would like to know how alligators fared.”

Finding hope after a hurricane

The hurricane has only exacerbated the existing challenges native species face to continue surviving. Almost all keystone species in Florida are threatened with habitat loss, including gopher tortoises, alligators, and burrowing owls. And as Florida continues to grow at what appears to be an exponential rate, the battle to conserve critical habitats intensifies.

Florida’s native wildlife are often viewed as “sentry species,” bearing the brunt of environmental impacts before their human neighbors do. And when powerful hurricanes like Ian, a Category 4 storm, become the norm, there will be fewer opportunities to devote time to cleaning up and caring for animals in between.

“You can’t underestimate these hurricanes—it can change in a flash,” Lechowicz said, alluding to the fact that Ian had changed course from Tampa to southwest Florida just before landfall. “But it’s an incredible amount of work to prepare for a hurricane.”

Florida wildlife rescues can’t stop one hurricane, but they can learn from Ian to improve wildlife’s chances of surviving the next. And they certainly learned a lot — the team at CROW did important work during Ian, with some vets and medical interns holed up in a Fort Myers hotel with newborns who needed 24-hour care like little squirrels and possum joeys. Frankel, meanwhile, filled her garage with birds of prey housed in the clinic’s intensive care unit – red-shouldered hawks, osprey and a stubborn horned owl.

When the power went out, the CROW crew got creative: Frankel recruited her family and friends to help her care for critically ill birds. Interns at the hotel did jumping jacks and squats with cans of food and water in their clothes to keep them warm with body heat, Dr. Laura Kellow, a vet at CROW.

And some species have slowly and cautiously reappeared in the weeks since Ian: In late October, an SCCF worker spotted a lone red-bellied bear, a turtle with a surly personality, trying to cross the road. Shorebirds such as plovers and terns return and populate the beaches where they feed and nest. And CROW still cares for—and releases—animals including burrowing owls, seagulls, and baby rabbits.

Organizations like SCCF are asking the public to share photos and stories of animals they’ve seen in the area as wildlife rescue teams chart their recovery. It’s too early to know how all of Florida’s beloved animals are faring, but there are glimmers of hope during the recovery process.

“Some of us have lost our homes or vehicles, but we continue to help wildlife patients and help each other,” Bast said.

Houston Astros pitcher Lance McCullers Jr. is out for Game 3 after being cut by a bottle of champagne during the post-game celebration

Skilling: What’s the weather going to be like in Chicago this week?