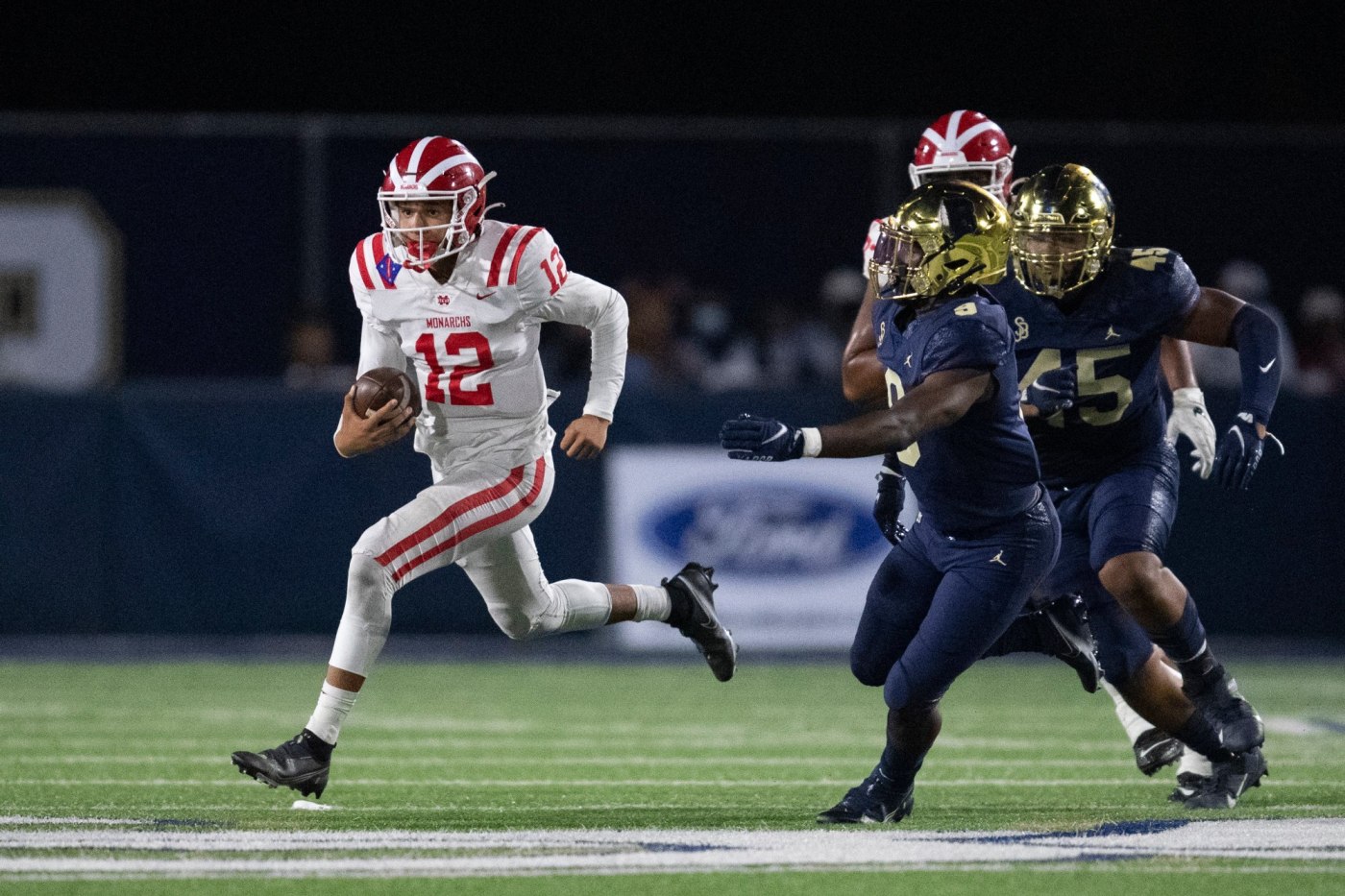 1. Big showdown this week: This is the week where we can see St. John Bosco vs. Mater Dei. They play at Santa Ana Stadium on Friday night.

Both teams are 6-0 and won their opening games in the Trinity League last week. St. John Bosco drove to a 49-3 win over Servite. (The Twitterverse was ecstatic as Servite took a 3-0 lead.) Mater Dei had a more difficult time, beating JSerra 21-13 after trailing for most of the first half. The closer-than-expected result was equal parts JSerra playing well and Mater Dei looking forward to the game against Bosco.

There was talk for weeks that this week’s game would be played at SoFi Stadium. Mater Dei, the home team, was uncomfortable with some elements added to the proposal to play the game at SoFi and school officials decided to keep the game at Santa Ana Stadium.

This year? If the Braves want to win, they need to keep Mater Dei quarterback Elijah Brown under constant pressure, but that’s something no Monarchs opponent has managed to do in the last two seasons. For Mater Dei to win, it must dominate the battle for field positions, with kickoffs being sent into the end zone for touchbacks and punts being knocked down well inside the 20-yard line to take – as far as possible – St. John Bosco’s Big playing ability.

2. No tickets? No problem. Tickets for the St. John Bosco-Mater Dei game went on sale online at 9am Monday, and before you could type GoFan.co, they were gone. Students, staff and families got the bulk of the tickets. It should be so.

Bally Sports West will be televising the game live on Friday at 7:30pm

3. Other big games this week. As I jotted down a list of the best games on Friday, 14 of them came to mind. Among them is JSerra (3-3 agg, 0-1 Trinity League) versus Santa Margarita (4-2, 0-1) at Saddleback College. Perhaps Mater Dei was looking ahead to Bosco last week; that’s still an impressive score for JSerra.

Santa Margarita had a total of 334 yards of offense against Orange Lutherans’ 244, but Orange Lutherans had Jireh Moe a 6-foot, 270-pound defensive tackle. Moe, a transfer who became eligible to play last week, blocked two extra-point kick attempts, recovered from a fumble and had a sack in the fourth quarter.

6. Balanced Garden Grove League. Five of the teams in the Garden Grove League have a record of .500 or better, including Rancho Alamitos, which is 6-0. Bolsa Grande, long one of the league’s last teams, improved to 4-2 overall last week by winning started the league with a 14:8 win against Santiago (4:2).

7. Well known name. Chris Hurley is the Quarterback for the Rancho Alamitos. The Hurley family has sent outstanding players to various schools including Garden Grove, Pacifica and Rancho Alamitos.

9. Goodbye. If ever a team needed a bye week, it’s San Juan Hills. The Stallions are 0-7 against a crazy tough schedule. They don’t play this week before playing in a Sea View League game in El Toro on Oct. 14.

10. Is that basketball? The basketball season got off to an early start, with Los Alamitos beating Santa Margarita 69-49 before scoring 61 points in a win over Newport Harbor. Wait a minute…wrong file grabbed…these are Los Alamitos’ last two soccer games. never mind

Clark's Adeleke is grateful when Davido and Chioma generously surprise him.