Estée Lauder is nearing a deal to buy Tom Ford for about $2.8 billion, including debt, beating out competition from a number of others interested in acquiring the luxury fashion brand, people on the matter said have been informed.

Tom Ford this week entered exclusive negotiations with Estée Lauder, which sells cosmetics brands including MAC, Clinique and Aveda, and a deal could be announced as early as Monday, these people said.

A deal between the two brands would underscore the strength of a luxury fashion and cosmetics market that remains resilient amid rising inflation and supply chain disruptions.

For New York-based Estée Lauder, the acquisition of Tom Ford would be the largest and latest in a series of deals, including its outright takeover of Canadian beauty group Deciem for about $1 billion in 2021.

Goldman Sachs was hired to explore a sale of Tom Ford earlier this year and has received interest from other luxury brands including Gucci-owner Kering. Estée Lauder already has a long-standing licensing agreement for Tom Ford’s beauty and fragrance products, which could have complicated a deal with Kering.

As part of the merger with Tom Ford, created by the eponymous fashion designer in 2005, Estée Lauder would also take over the clothing business, an area in which it has relatively little experience.

Tom Ford’s beauty line has done particularly well in China, a growth market for both companies. It also has a fairly lucrative eyewear business through licensing deals with sunglass maker Marcolin. 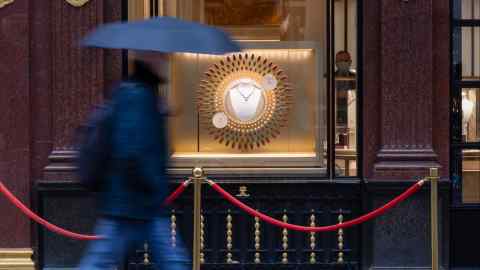 The Wall Street Journal reported last week that Kering was in advanced talks to buy Tom Ford for about $3 billion, putting it ahead of Estée Lauder. However, talks with owner Gucci fell through as the two sides struggled to reach an agreement on multiple fronts, people with knowledge of the matter said.

Tom Ford is best known for transforming Gucci from a reputable family-owned leather company into a fashion powerhouse and the foundation of what is now Kering in the 1990s. He later left Gucci in 2005 to co-found Tom Ford with Domenico De Sole, whom he hired at Gucci in 1994.

While Tom Ford thrived, business struggled during the coronavirus pandemic and the company was forced to lay off and furlough employees.