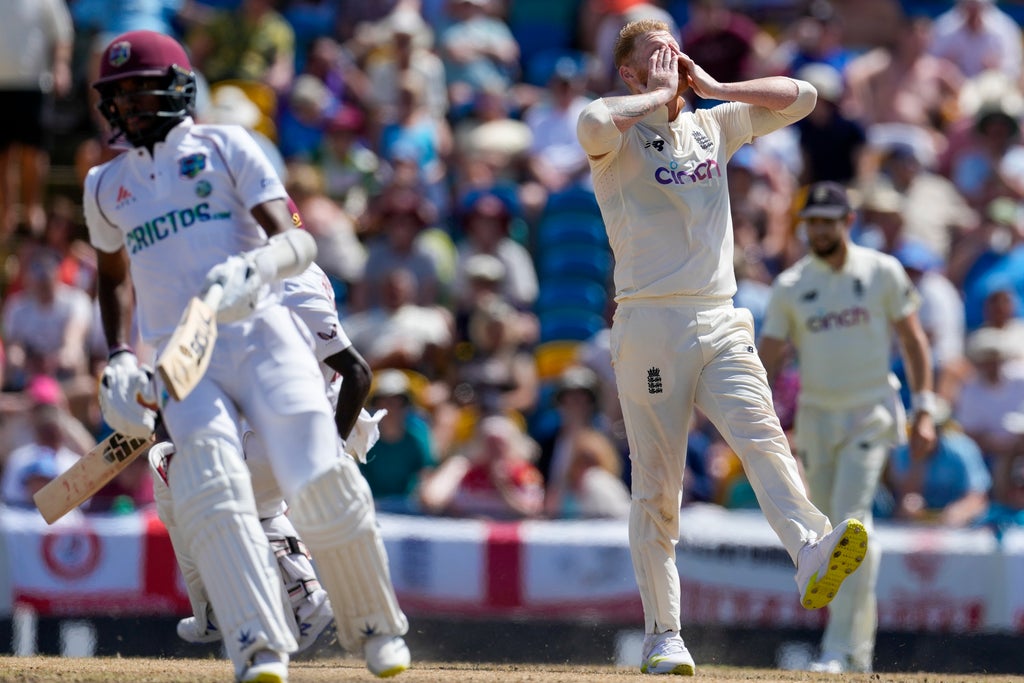 England met a wall of resistance on the third day of their second Test against the West Indies, managing just two wickets in two sessions in Barbados.

After enjoying batting on a flat field and collecting 507 declared nines, the tourists couldn’t get much joy out of the ball as Kraigg Brathwaite and Jermaine Blackwood held them back with a defiant stand.

After Shamarh Brooks and Nkrumah Bonner were sacked before lunch, England drew a gap in the afternoon as the hosts reached 196 for three.

Brathwaite was unbeaten at 79 after digging in for 242 balls, while Blackwood’s 50 didn’t fall from 116.

England will regret their failure to give DRS a chance when Blackwood was still clean and Ben Stokes waves off referencing his own lbw replay-only appeal to show the ball taking out the leg stump.

Although the game won’t be over until half-time, there will already be fears that the teams are heading for a second straight stalemate after last week’s draw in Antigua.

England’s strong runs and the West Indies’ relatively subdued batting average still give Joe Root’s side a chance to push the envelope, but there’s still a lot of hard work ahead in conditions as favorable as these.

With first-innings runs weighing to play, Root threw the ball to Jack Leach first, prompting him to work on an aggressive line with tight catchers.

Leach asked all the right questions with the gentle twist he could find only to hit with a rare loose delivery.

Seeing a chance to score with a short ball, Brooks sat back and clipped a catch at the back point for Chris Woakes, giving away a hard-working 39.

But with Brathwaite in safe hands and last week’s player of the match Bonner joining him, England faced a challenge.

Bonner had seen 493 sending-off balls in Antigua and quickly increased his tally to over 500 before recording the first limits of the day in the 14th set. Leach conceded both, straying down the leg before offering a half-volley to end an otherwise seeking spell.

That got Stokes up front and he was elated to win a decision against Bonner, pogoting up and down in celebration.

He had to wait for DRS confirmation and perhaps felt lucky that the third referee ruled in his favour. UltraEdge appeared to address the possibility of a simultaneous inside edge, but Nigel Duguid’s decision would stand.

Stokes would have picked Blackwood up for a duck if he had filed another objection to the new bat, but the bowler walked away from a discussion with Root, seemingly convinced it was a dud. Replays duly showed Blackwood getting a clean hit in front of the leg.

The West Indies added 82 without further drama in the afternoon game. Brathwaite slowly grinds towards three figures and Blackwood brings up his half-century just before tea.

It was a day of steady but joyless work for debutants Matthew Fisher and Saqib Mahmood, both of whom were needed more than Woakes, who had just four overs before the second new ball arrived.

https://www.independent.co.uk/sport/cricket/england-ben-stokes-jack-leach-chris-woakes-west-indies-b2039303.html England met a wall of resistance in the second test against the West Indies

David Roddy of the State of Colorado – Orange County Register